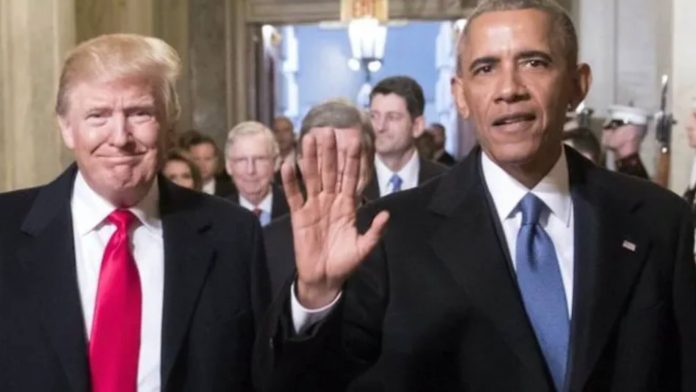 Barack Obama has attacked President Trump and his supporters, claiming Donald Trump’s huge popularity is nothing more than a “racist reaction” to his own presidency.

In his forthcoming memoir, which focuses on his first term in the White House, the former POTUS slams Trump supporters as xenophobic and paranoid.

The 768-page book, entitled “A Promised Land,” is due for release this week.

In the book, Obama speaks about the alleged rise in racism across the United States, blaming President Trump for racial divisions in America, despite race riots taking place during his own presidency.

Obama goes on to claim it was his own election as the America’s first African American president that sparked some of the current division in the country.

“It was as if my very presence in the White House had triggered a deep-seated panic, a sense that the natural order had been disrupted,” Obama writes in the book.

Donald Trump, he claims, sensed the country’s mood and took advantage of it to win the White House in 2016

“Which is exactly what Donald Trump understood when he started peddling assertions that I had not been born in the United States and was thus an illegitimate president,” Obama writes.

“For millions of Americans spooked by a Black man in the White House, he promised an elixir for their racial anxiety.”

Dailymail.co.uk reports: But, Obama claims, the roots of the the problem came before the current president. He traces it to John McCain’s decision to name Alaska Gov. Sarah Palin as his running mate in the 2008 presidential election. 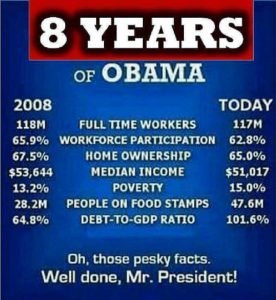 ‘Through Palin, it seemed as if the dark spirits that had long been lurking on the edges of the modern Republican Party — xenophobia, anti intellectualism, paranoid conspiracy theories, an antipathy toward Black and brown folks — were finding their way to center stage,’ Obama writes.

However, he goes on to absolve McCain of any responsibility, saying he believed the senator, who died of brain cancer in 2018, wouldn’t have made the same choice if he knew what the future held.

‘I’d like to think that given the chance to do it over again, he might have chosen differently,’ wrote Obama, who gave one of eulogies at McCain’s funeral. ‘I believe he really did put his country first.’

The book is the first of two parts coming from the former president – part of a $65 million deal he and Michelle Obama signed with Penguin Random House. The former first lady’s book ‘Becoming’ sold millions of copies when it came out in 2018, setting a high bar of expectations for her husband’s book.

The former president is preparing for a publicity tour – he’s already sat down with CBS’ ’60 Minutes’ and ‘CBS Sunday Morning.’ The New York Times has reviewed a copy of the tome.

This book deals with his first term in the White House. It begins with his early political campaigns and ends with a meeting in Kentucky where he is introduced to the SEAL team involved in the raid that killed Osama bin Laden.

His mentions of Trump come through the prism of Trump’s criticism of himself, including fanning the lie that Obama was not born in the United States.

He notes Trump’s musings were originally seen as a joke but he came to regard them as part of the Republican Party’s attempts to appeal to white Americans’ anxieties about the first black president.

He also described McConnell as power hungry, writing what the Kentucky senator ‘lacked in charisma or interest in policy he more than made up for in discipline, shrewdness and shamelessness — all of which he employed in the single-minded and dispassionate pursuit of power.’

But Obama has praise for other Republicans, including former President George W. Bush.

He spoke of his predecessor’s kindness after he won the 2008 election, noting he and his family received a warm welcome at the White House.

‘Whether because of his respect for the institution, lessons from his father, bad memories of his own transition… or just basic decency, President Bush would end up doing all he could to make the 11 weeks between my election and his departure go smoothly,’ Obama wrote.

He added that Bush’s daughters Barbara and Jenna ‘rearranged their schedules to give Malia and Sasha their own tour.’

And he noted how he used that as example for his own actions after the 2016 election.

‘I promised myself that when the time came, I would treat my successor the same way,’ Obama said.

There is also praise for his vice president, the incoming president Joe Biden, whom he campaigned for in the 2020 election.

‘I liked the fact that Joe would be more than ready to serve as president if something happened to me — and that it might reassure those who still worried I was too young,’ Obama wrote. ‘What mattered most, though, was what my gut told me — that Joe was decent, honest, and loyal. I believed that he cared about ordinary people, and that when things got tough, I could trust him. I wouldn’t be disappointed.’

The book also divulged into the personal with Obama discussing his marriage and how the White House increased his smoking habit.

He admits that he would sometimes smoke eight or nine or ten cigarettes a day and look for a ‘discreet location to grab an evening smoke.’

But it was his eldest daughter Malia who got him to quit, which he did by ‘ceaselessly’ chewing nicotine gum, a tool he used after she frowned at him after ‘smelling a cigarette on my breath.’

Malia Obama was 10 and Sasha Obama was seven when their father won the White House.

The fishbowl life in the White House also added tension to his marriage and he hints at frustrations felt by his wife.

‘Despite Michelle’s success and popularity, I continued to sense an undercurrent of tension in her, subtle but constant, like the faint thrum of a hidden machine,’ Obama writes. ‘It was as if, confined as we were within the walls of the White House, all her previous sources of frustration became more concentrated, more vivid, whether it was my round the clock absorption with work, or the way politics exposed our family to scrutiny and attacks, or the tendency of even friends and family members to treat her role as secondary in importance.’

Obama adds that there were nights ‘lying next to Michelle in the dark, I’d think about those days when everything between us felt lighter, when her smile was more constant and our love less encumbered, and my heart would suddenly tighten at the thought that those days might not return.’