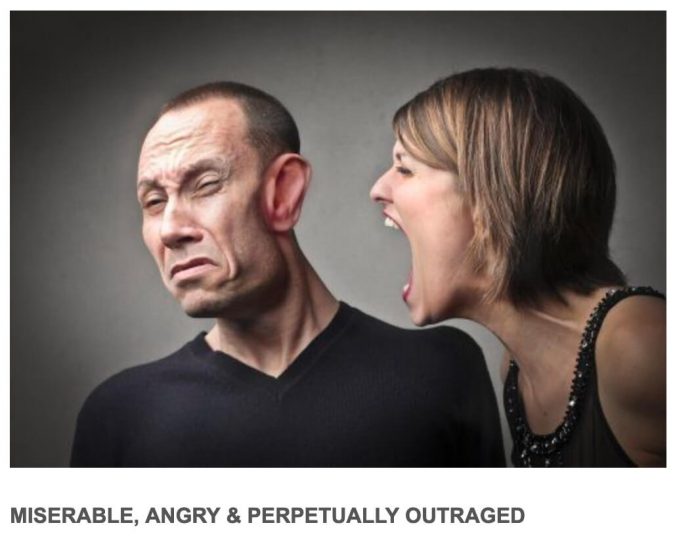 One of the most common Googled questions about feminists is “Why are feminists so angry?” According to feminists, the answer to that ranges from denial,  “We’re not always angry, we are just tired of being oppressed,” to justification for the anger saying it is “a legitimate response to the oppression we’ve been subjected to for millennia.”

As a woman that believes in equality, just as I believe there are very real differences between men and women, which I celebrate, I call bull shit on both those answers.

The first and second wave of feminism did address real oppression, and laws were changed and women obtained true equality, but the feminist movement, rather than celebrating those milestones, moved into another phase, where modern feminist display hatred, intolerance an disdain for men, calling masculinity “toxic.”

Modern day feminists still believe they are “oppressed” while at the same time, attempt to “oppress” their male counterparts.

Their victim hood mentality of thinking they were automatically being oppressed because they were born with a vagina aside, we also note that modern day feminists spend all their time just looking for something to be angry about, are perpetually outraged and end up generally miserable all the time, while trying to make everyone around them just as miserable.

A recent example of feminists just looking for something, anything, to get angry and outraged over, comes from a career feminist, Anita Sarkeesian, who took to Twitter to publicly complain about the first episode of the Star Wars series for Disney Plus, called “The Mandalorian.”

Her complaint came by way of a four-part series of Tweets which began with “Am I extremely tired or is there not a single female speaking character in the first episode of #Mandelorian?? I’ve gotta have missed something right???”

She continued with tweet 2) “I guess Jon Favreau was like “well if we just make all the vehicles female like the ship and the Blurrg then we’re good right? That’s just the right amount of ‘female’”.”

Tweet 3) “It feels especially jarring given how much the recent films have done to amplify women and women of colour who have been historically marginalized in the franchise.”

Tweet 4) “I still feel like I just forgot an entire scene and that in this year of our Lord 2019 an epic blockbuster television show could not be released without any female speaking parts.”

After being reminded that there was a female character in that first show, pretty much making her whole whining little rant moot, she then stated “Shout out to @jaydedaustin for reminding me of the one scene that had a female character. Lol. Sigh. STILL.”

Had this just been one loud mouthed feminist looking for something to complain about, this wouldn’t even be a story, but many more feminists decided to jump on that same bandwagon, showing Sarkeesian is not an outlier, but rather this is the mentality of feminists today.