You Stupid Boy
Home US Politics Another CCP Win 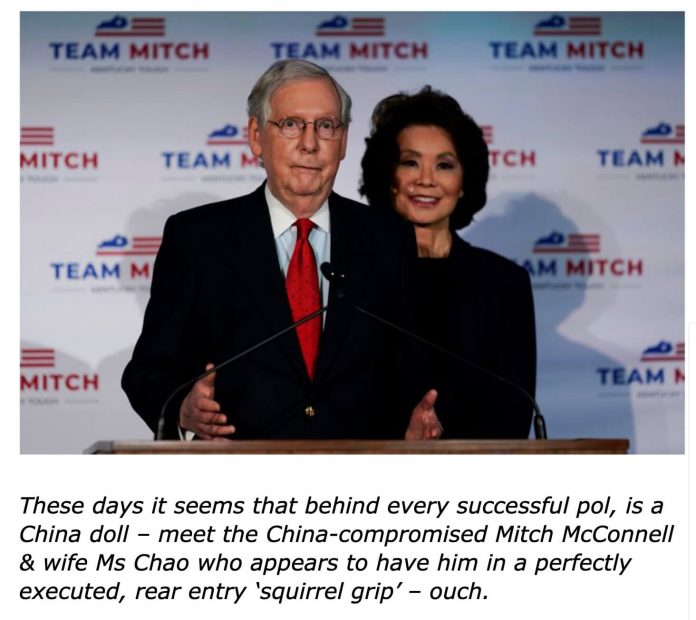 Not only has China Mitch gotten filthy rich by protecting his wife’s Chinese ship-building interests for many years (net worth jump from $3 million to $36 million) – it seems his recent re-election has a back story as well.

Last July, much of the election fraud now paralysing my home nation could have been avoided, had ‘China Mitch’ not blocked two bills providing $775 million to “bolster election security” that would have required “a physical paper trail of every single ballot cast in the country.” (ibid)

Only a recipient of Dominion’s vote-fixing capabilities (and bribes – a.k.a. ‘donations’) could have been against such a move, especially in retrospect.

That’s right.  Mitch and his wife’s family make ships for the Communist Chinese Navy and other CCP interests.

So, when ‘China Mitch’ is barely hanging on to his Senate leadership and seat last year, who better to come to the rescue than CCP’s vote-rigging company, Dominion Voting Systems?

It’s all in the family, right?

‘China Mitch’ acknowledged his fellow CCP operative Joe Biden as President last night, sticking a knife in President Trump’s back as he fights on

Not only did ‘China Mitch’ stab America’s only hope in the back as the election tide turns in Trump’s favour, “Senate Majority Leader Mitch McConnell warned Republican senators Tuesday during a private caucus call not to object to the election results on Jan. 6, according to two sources familiar with the matter.” (POLITICO, 12/15/20)

Why would Mitch McConnell do that?

If a single Senator and even one member of the House of Representatives challenge the integrity of the election, it prompts hearings and can ultimately lead to the House choosing the president and the Senate choosing the Vice-President.

China Mitch is clearly serving his CCP masters in bold fashion, as Trump will win in the House of Representatives and Pence (who would preside over his own re-election vote in the Senate) will win in that body in spite of ‘China Mitch’ if anyone challenges.

That’s right. All it takes is one courageous Senator to ignore ‘dear Leader McConnell’ and go with the President by challenging the most corrupt, fraudulent election in U.S. history – and it’s game over for the CCP.

And that’s why his fellow CCP-compromised pal, Joe Biden, went to China Mitch the week before last to negotiate a way to stay out of prison and keep his cash in a recent bid to concede in exchange for clemency.

They’re on the same team.

Joe Biden and Mitch McConnell both wear CCP jerseys. Mitch’s sister-in-law, Angela Chao, was appointed to Bank of China Board 10 days after Trump was elected, and runs the shipping company with her father, as the largest defence contractor for the Chi-Coms.

Mitch is the second most compromised China puppet in U.S. Government behind Joe Biden and will need him in the White House to protect his own nefarious conduct once this publication and others out his treason against President Trump and America – by doing the bidding of the CCP.

Stay tuned.  The tide is turning and a few back-stabbing turncoats like China Mitch won’t stop the Trump Train.