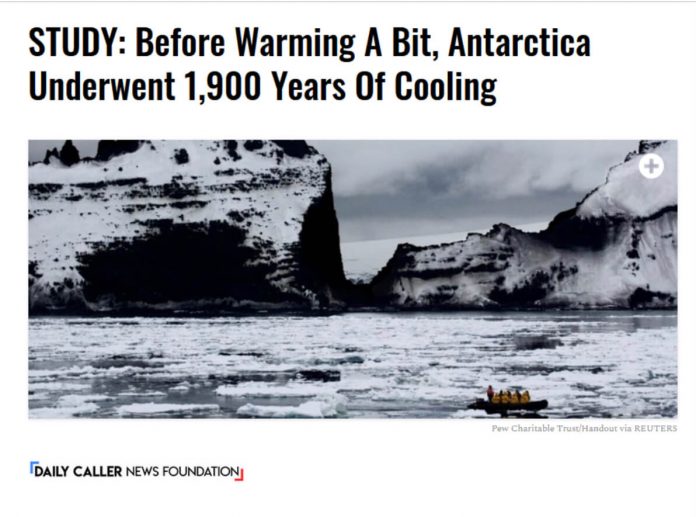 Another study, published in 2017, adds to our understanding of long term Antarctic temperature trends:

Antarctica went through a 1,900-year cooling trend before warming up a bit in the last century, according to a study showing that the South Pole has been much warmer in the past.

The current warming is not unusual for the South Pole, according to the study led by Italy-based scientist Barbara Stenni, which used ice cores to reconstruct Antarctic temperatures over the past two millennia.

“Our new reconstructions confirm a significant cooling trend from 0 to 1900 CE across all Antarctic regions where records extend back into the 1st millennium, with the exception of the Wilkes Land coast and Weddell Sea coast regions,” Stenni and her colleagues wrote.

The study also found that “the warmest period occurs between 300 and 1000 CE, and the coldest interval occurs from 1200 to 1900 CE,” suggesting that today’s relatively warm Antarctic temperatures are not unprecedented.

Antarctica has confounded climate scientists for decades.The continent’s inhospitable conditions make it hard to collect data from the region, and historical records are hard to come by. Scientists can use ice cores, but new evidence suggests there are problems with relying on such methods.

Either way, Antarctica has shown few signs of global warming, defying climate model predictions that the region would warm as greenhouse gases accumulated in the atmosphere.

That’s not been the case for the entire continent.

A 2016 British Antarctic Survey study found that the Antarctic Peninsula had undergone a cooling trend since the 1990s, due to a confluence of the hole in the ozone layer, sea ice and westerly winds.

The media has breathlessly reported on the “unstoppable disintegration” of Antarctica’s ice sheet, despite the lack of a clear manmade warming signal in the South Pole. Stenni’s study puts the recent warming in context.

However, Stenni admits the “absence of significant continent-scale warming of Antarctica over the last 100 years is in clear contrast with the significant industrial-era warming trends that are evident in reconstructions for all other continents (except Africa) and the tropical oceans.”

This lack of warming “is not in agreement with climate model simulations, which consistently produce a 20th century warming trend over Antarctica in response to greenhouse gas forcing,” Stenni wrote.