You Stupid Boy
Home Chinese Virus Are They TRYING To Kill You? 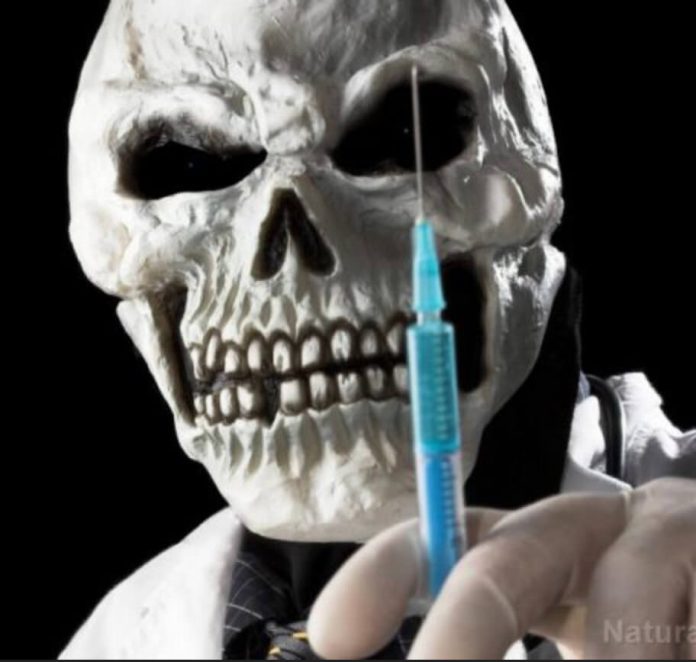 Are They TRYING to Kill You, or Are They Just Corrupt, Avaricious, and Stupid?

Governments [and their bureaucracies] lie. They lie all the time. If they told people the truth, they wouldn’t last very long. –Legendary historian Dr. Howard Zinn

That means the mRNA jabs would have to protect you 100% from COVID death for nearly three years for them to be a break-even proposition. You know the jabs don’t protect you for three years because they’re already telling you you need to risk another jab and it hasn’t even been one year.

But it’s worse than that. This analysis doesn’t include the many vaccine side-effects because the official Israeli records don’t include them. While many of these side effects may not kill you, they may leave you crippled in various ways and mark you for life. Bell’s Palsey, Guilian Barr Syndrome, stroke, heart inflammation, etc. for just a few examples.

And what happens after those dangerous initial weeks?

We don’t know for sure because there aren’t even those meticulous Israeli Government vaccine-related death records after that initial period.

We can, however, get a pretty good idea from the VAERS (Vaccine Adverse Event Reporting System) and equivalent EURO data bases where some — best estimate, only about 10% — of the vaccine related deaths and side-effects are reported. Even that meager 10% reported through VAERS alone shows completely unprecedented levels of vaccine related injury and death – – –

So, even though seriously underestimated, both VAERS and the EU verson reveal an unprecedented — but still only short-term — continuation of jab-related death and serious — often incurable — side-effects and injuries.

Unfortunately, the really long-term negative effects can’t be detected, verified, and analyzed because those require long-term tracking and verification.

How long-term is “long-term?”

In general, because of the major potential harm vaccines can do when widely administered, the normal “long-term” necessary to collect, verify, and analyze vaccine data is about six years but may be as long as 12 years. That means a minimum of six years of long-term data are required before a vaccine’s safety can be legitimately certified.

And keep in mind, such vaccine safety approval is actually a rare event. About 78% of experimental vaccines don’t make the grade.

Do we have six years of long-term data on the mRNA jabs?

So, have they been LEGITIMATELY certified “safe?”

OK, so they’re still “experimental,” regardless of FDA shenanigans.

So, first iteration, “Are They TRYING to Kill You or Are They Just Corrupt and Stupid?”

Either way, that means we’re likely in for some unpleasant surprises in the next five years and possibly many more years to come.

What sorts of “unpleasant surprises?” 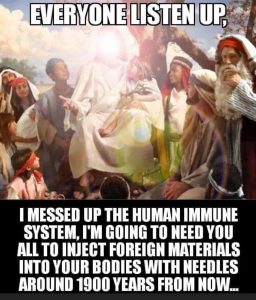 There are at least two longer-term problems caused by the experimental mRNA vaccines — Pfizer, Moderna, AstraZenica, J&J, etc. — predicted by virologists, for which there is significant and developing data — and another problem that’s a lot more unpleasant. There may be others.

The first problem is what’s being called “the leaky vaccine” problem. Since their true efficacy has been lowered from the fake P.R. mid 90% range to a current low in the 30% “leaky” range, these mRNA jabs turn vaccinated folks into factories producing new mutated versions of COVID. This explains the rapid development of Delta, Mu, etc.

The second problem is called antiboddy dependent enhancement or ADE. ADE may cause mRNA vaccinated folks to have much more serious disease when later exposed to the actual COVID virus, especially if it’s a variant.

Further, this research shows that vaccinated folks may be overrun with virus, carrying 251 times as much virus as unvaccinated folks, and thus have the potential to become so-called “super-spreaders.”

But there’s a third problem, apparently unique to mRNA, which has caused animal tests — waived for the mRNA COVID vaccines — to fail. The animal subjects died of a plethora of causes, and may have been rendered incapable of reproduction.

The mRNA jabs program your own cells to produce toxic COVID spike protein. They were specifically designed to do that. It’s these self-produced spike proteins that cause your immune system to produce antibodies.

But these experimental “vaccines” don’t always stay in your deltoid muscle — the usual injection site — like they’re supposed to. They circulate throughout your body, causing cells in many locations to produce the toxic COVID “spike protein.”

According to one Canadian doctor, this happened in 62% of his mRNA vaccinated patients.

But just like the original, the escaped toxic self-produced spike proteins damage cells in many organs — especially in the circulatory system — throughout the body, doing often irreversible micro-damage.

This explains the increased occurrence of circulatory problems like heart inflamation in mRNA vaccinated young men. It would in fact explain the wide range of effects of both COVID itself — and mRNA vaccine side-effects.

The problem is that the circulatory system produces micro-clots in response to the spike-induced cell damage. In many organs, the spike-caused damage doesn’t heal and the clots may block capillaries, thus starving parts of various organs of oxygen. For example, if in the brain, this would cause micro-strokes.

This sort of spike and micro-clot damage is very difficult to diagnose because, well, it’s micro. So far there’s only one test, normally used to diagnose large clots but it works even if there are a bunch of smaller clots as well.

That test is called the D-DIMER test, and if you’ve had the jab or know someone who has, and are having weird symptoms — often written-off as psychological — push for the D-DIMER test.

But we only know about some — and only some — of these mRNA-caused problems because every once-in-awhile, one of them manages to escape the establishment’s vaccine-protective cone-of-silence and then also manages to avoid the rampant media/internet censorship and character assassinations.

To get a clear picture of the net benefit of risking an mRNA jab, any ill-effects during that six-year period must be discovered, analyzed, quantified, and added to the 14.6x death-risk danger which only covers the deaths — not the other side-effects — during the tracked period immediately after the jab(s).

Further, the additional deaths, maimings, etc. only show up in longitudinal studies conducted over time, normally at least six years for vaccines remember. But we don’t have the six-year long-range experience and data to recognize and analyze those long-term effects. The medical establishment is just beginning to react to the clot dangers for example.

But even if the experimental mRNA vaccines were safe and effective — we now know they’re neither — there are still at least three reasons not to get jabbed with them anyway.

FIRST: For nearly everyone under the age of 60, COVID itself is of very little rational concern, less concern than seasonal flu for example — especially when measured against the dangers and expense of the jab. This is spectacularly true for children who hardly ever contract it — and the very few who do almost never die from it. And despite the outlandish media fear-mongering, children don’t pass it on to grandpa.

SECOND: There are extremely effective non-vaccine treatment alternatives with long track records of safety. According to their own rules, that means the F.D.A. is not permitted to grant emergency status to untested vaccines. Of course they did anyway. Afterall, if we’ve learned anything in the last year-and-a half, it’s that the rules only apply to us, not to them.

THIRD: We also know that natural immunity is at least 13 times more effective at stopping COVID-19 and it’s spread than the jab and yet the health bureaucracy and industry wants to vaccinate those with natural immunity anyway — including the kids — despite the 14.6x-plus death-danger from the vaccine.

Why? Do they want to kill you or are they just stupid? Or is there more to it? Are they avaricious? Is it the money?

The real tell is that whoever’s calling the shots on this farce is CENSORING everyone who calls attention to their numerous mistakes, misprints, unintended bias, fudges, fibs, misrepresentations, outright lies, fraud, etc. Some folks call such checking, testing, analyzing — and taking the time to do it — “Due Process of Science.”

NOTE TO DR. FAUCI: Without Due Process, you can’t claim it’s science.

And they’re censoring everyone from Dr. Robert Malone, who developed the mRNA technology used in these “vaccines” while he was working at the Salk Institute of Virology, to progressive star Dr. Naomi Wolf who’s been trying to warn us for over a year. And nearly everyone in between.

In the good old days, resorting to censorship was the kiss of death. The censorship itself was taken as prima facie proof the censor couldn’t rationally deal with challenges and was, well, just completely full of it.

You can draw your own conclusions.

So, are they trying to kill you or are they just corrupt, avaricious and stupid?