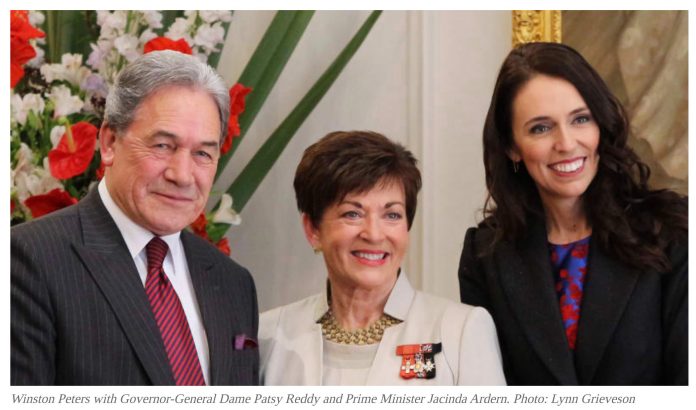 Winston Peters could soon be a knight, if the Government has rushed to honour him and overlooked lingering controversies

In just over a week we will learn if the Government has decided to issue Winston Peters with the knighthood and status his name and double-breasted suit have long awaited.

Sir Winston has a natural ring to it but would it be a move too fast and would it be justified by his political life and times?

The 75-year-old New Zealand First leader is in parliamentary retirement, having lost three electorate seats over his 45-year political career and now, at the October election, leading his party to 2.6 percent of the vote and a second period in the wilderness.

It has been a career of longevity (a tick in terms of the honours list) and ongoing controversy (a question mark when such recognition is conferred).

Peters was a minister in four administrations, having briefly sat in Jim Bolger’s National Cabinet as Māori Affairs Minister in the 1990-93 term, joined Bolger again in 1996-98 with the lofty title of Treasurer and Deputy Prime Minister before exiting that government, become Foreign Minister for (almost all of) Helen Clark’s final term 2005-2008, and foreign minister and deputy Prime Minister in the first Jacinda Ardern Cabinet.

He was also the oldest MP by some margin, and, of course, the leader of one of the minor political parties for 27 years.

In many books, that political CV is an automatic knighthood. Previous Deputy Prime Ministers Bill English (who also did do a year in the big job), Michael Cullen, and Don McKinnon have been so honoured. Peters’ friend McKinnon went on to be Secretary-General of the Commonwealth, Cullen had major and lasting policy achievements as finance minister and senior public roles in retirement.

Other Deputy PMs Jim McLay and Brian Talboys took the knee before the Governor-General or the Queen. But English’s deputy Paula Bennett, (too soon) Jenny Shipley’s sidekick Wyatt Creech and Clark’s first deputy Jim Anderton are among those who did not make the cut – the last two both being made Companions of the NZ Order of Merit (CNZM).

Former foreign ministers’ qualification for the tap on the shoulder are not so clearcut. Peters’ predecessor Murray McCully represented New Zealand for nine years around the world and remains a CNZM and Phil Goff, who was also Leader of the Opposition and now Auckland Mayor, likewise.

(For completeness: Prime Ministers and party leaders David Lange, Bolger and Clark ruled out personal knight and damehoods. Lange was made a Companion of Honour (CH), all three were or are members of the 18-person Order of New Zealand.)

So, using the measure of longevity and Cabinet seniority, Peters would have as good a case as many. Another with a suitably lordly name, Douglas Montrose Graham, also received the ‘Sir’ that had long seemed so inevitable, but Graham contributed substantially to Treaty of Waitangi settlements.

Did Peters’ achievements in office and in Parliament outweigh the political controversies, the negative politics (he took pride in describing his party as the ‘handbrake’ on Ardern’s first government’s policy agenda), his reputation for being anti-immigrant and his ongoing legal action against the Crown, an extraordinary case which has already cost the public more than $1 million, in which he accuses top civil servants of acting in bad faith.

If this Government’s honours committee has had time, or the inclination, to drop Peters’ name into a New Year list that by the time of his exit on election day October 17 had already been well formed, will its members have overlooked the finding of Parliament’s Privileges Committee in 2008 that censured him for providing ‘false and misleading information on a return of pecuniary interests”.

Or his party’s declining a recommendation from the Speaker of the House in 2005 that all parties repaid monies from parliamentary funding deemed by the Auditor-General to have been spent unlawfully. New Zealand First was the only party not to repay its assessed sum, of $150,400.

Or Peters’ legal action against the State Services Commissioner and former head of the Ministry of Social Development (among others) over an alleged breach of his privacy for having been overpaid national superannuation for six years, which carries on in 2021 at the Court of Appeal.

Or the current court case resulting from a Serious Fraud Office investigation into the New Zealand First Foundation which has resulted in charges against two people (not NZ First members or MPs) whose names are suppressed?

Few other politicians would have so many virtues and potential vices, in terms of the honours committee’s lists of ‘for’ and ‘against’ a senior gong.

It might be that wise heads have prevailed and a decision has been made not to rush any knighthood, or even a Companion of the Order of New Zealand title as accorded McCully, Anderton, Creech and Goff, until the next round of honours at Queen’s Birthday 2021.

With the advantage of time, much might have been made clearer in the courts and the political aftermath of Winston Peters.

Previous articleIt’s not over yet
Next articleHave Your Say