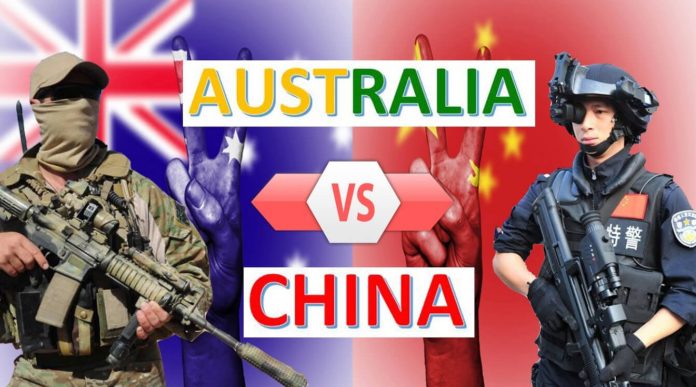 The first reaction of our Trade Minister, Simon Birmingham, to China’s ban on Australian coal imports was “But it will increase China’s CO2 emissions!” if China burns Indonesian, Mongolian or Russian coal instead of the high quality stuff that Australia produces. The stupidity and naiveté of that reaction was enough to generate a headline on Instapundit:

Our Simon hasn’t been able to figure it out for himself, and nobody has told him: CO2 as the bogeyman is just a distraction for the masses. China couldn’t give a tinker’s cuss about C02. They have said they will be emissions neutral by 2060 and will be increasing coal use up to 2040 in the interim. The details don’t matter because it is just verbiage for gullible foreign audiences, like our Simon.

The politically acceptable line as to why China has banned imports of Australian coal, barley, wine etc. is to punish us for calling for an inquiry into the origins of the Wuhan virus. That is China is giving us a whacking at little cost to itself — there are other sources of wine and barley and crayfish.

But in banning Australian coal, the Chicoms are taking real pain and that means the bans have a higher purpose. Cold is a killer and winter has come early to northern China. Deaths from cold start rising once indoor temperatures fall below 17°C. Even the renewables-driven increase in power costs in NSW caused respiratory deaths to increase by 25% at Royal Prince Alfred Hospital in Sydney over the last two winters. Renewables have killed far more people in Australia than the virus, due to the elderly being overly prudent in the use of electric power in reaction to power price increases.

In the 1950s the Chicoms brought in the Haui River policy. The area north of the Huai River receives free or subsidised coal for winter heating. The people south of the river miss out. The line is shown on this map: 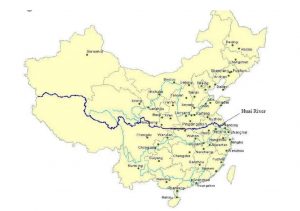 As a consequence of the particulates associated with burning that coal, Chinese living north of the Huai River have their life expectancy reduced by five and a half years relative to those living south of the Huai River. Traditionally, stone beds in northern China had coal-burning stoves built into them. The Chicoms could put scrubbers on all their coal-burning factories and power stations but they would rather spend that money on building aircraft carriers and other machines to kill foreigners. Killing foreigners has a higher priority in China than clean air and clean water.

Due to the early onset of winter, coal is now in short supply in northern China . The Xi regime has reacted, in some areas, by banning internal heating until the external temperature falls below -3°C. A lot of people are going to die this winter in northern China due to respiratory failure caused by the ban on Australian coal.

So what is the higher purpose of all this? It is to winkle Australia out of the Quad. The Quad is the grouping of India, Australia, Japan and the United States formed to counter China’s aggression. A few years ago a Pentagon study concluded that to win against China, the United States just needed bases in Guam and Australia. President Xi must have come to the same conclusion. He is trying to take Australia out of the picture, and his war is coming soon. 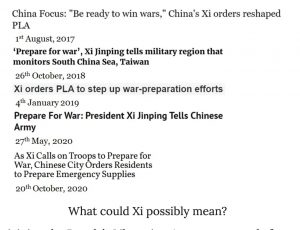 President Xi has been enjoining the People’s Liberation Army to get ready for war ever since he ascended the throne in 2012. The frequency of that instruction has increased in recent years. Banning Australian coal to winkle us out of the Quad is part of the battlespace preparation.

Whatever money we make out of selling iron ore to the Chicoms needs to be spent on weapons systems. Don’t let Simon Birmingham anywhere near that process.

We will be okay. We have chin dribble as our foreign minister. she has suddenly found she is a descendent of the chinks. She will know how to sort them out. They are our rellies, don’t you know!

Previous articleHave Your Say
Next articleWe Are Not Alone: Open Letter from an American.