You Stupid Boy
Home Space Behind a Black Hole

Behind a Black Hole 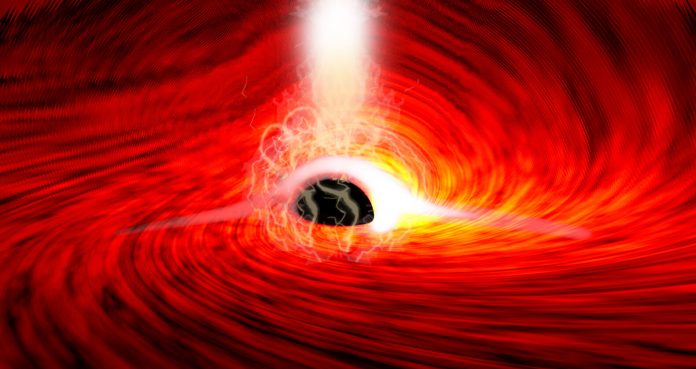 The X-ray reverberations were predicted by Einstein’s theory of general relativity.

Astrophysicists have detected light coming from the far side of a black hole, using telescopes to see physics predicted by Einstein’s theory of general relativity but not yet directly observed. The new findings affirmed ideas about how black holes warp light.

A team of researchers recently inspected the coronal flares produced by the supermassive blackhole I Zwicky 1. They found that some of the X-rays produced by the flares were reflected off the far side of the black hole’s disk, bent around the object by its gravitational field. This is different from gravitational lensing, in which our view of a distant object is distorted as its light bends around a massive object. In this case, X-ray light from the coronal flare reverberated off the black hole’s accretion disk, bending around the black hole and back toward the researchers’ telescopes. The team’s analysis was published today in Nature.

“Any light that goes into that black hole doesn’t come out, so we shouldn’t be able to see anything that’s behind the black hole. The reason we can see that is because that black hole is warping space, bending light and twisting magnetic fields around itself,” said Dan Wilkins, an astrophysicist at the Kavli Institute for Particle Astrophysics and Cosmology at Stanford University and a co-author of the new research. 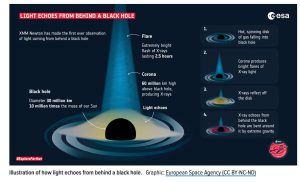 Black holes are so gravitationally intense that not even light can escape them once it is sucked in. Matter falling into black holes is pulled apart by intense forces—ripped apart even at the atomic scale—making a soup of superheated, magnetized plasma around the cosmic structures. That charged plasma forms much of the black hole’s accretion disk (a big, DVD-shaped aggregation of stuff around most supermassive black holes), and results in the black holes’ magnetic fields. When those magnetic fields arc and converge, they cause bright flare-ups in the very hot periphery of the black hole, similar to those that occur in the Sun’s corona.

The idea that black holes’ intense gravity could bend light around itself was proposed by Einstein, but technology has taken a while to catch up (and still hasn’t completely). “Fifty years ago, when astrophysicists [started] speculating about how the magnetic field might behave close to a black hole, they had no idea that one day we might have the techniques to observe this directly and see Einstein’s general theory of relativity in action,” said paper co-author Roger Blandford, a particle physicist at Stanford, in the university release.

The recent observations of light from the black hole’s far side were made using the European Space Agency’s X-ray Multi-Mirror Mission (XMM-Newton) telescope and NASA’s NuSTAR telescope. The team used the telescopes to peer at bright X-ray flares emanating from the 18.6-million-mile-wide black hole, which swirls some 800 million light-years from Earth. But they found those bright bursts were followed with a surprising smattering of smaller X-ray bursts. That indicated the second round of X-rays were an echo of the earlier bursts, reflecting from the black hole’s back side.

Erin Kara, an observational astrophysicist at MIT who was unaffiliated with the recent paper, wrote in an email to Gizmodo that the work is “a very nice demonstration of reverberation light echoes in action.” Kara added that it was important that Wilkins’ team show the amount of energy required for each flare to occur, which helped indicate the echoed flares as just that—reflections of flares warped by the black hole’s physics—and not just smaller flares elsewhere in the hole’s corona.

“Reverberation has been seen in other accreting black holes, both from supermassive and stellar mass accreting black holes, but usually we need to average over many flares on a range of timescales in order to see such a signal. While this observation doesn’t change our general picture of black hole accretion, it is a nice confirmation that general relativity is at play in these systems,” Kara said.

More precise telescopes could sharpen astrophysicists’ understanding of these physical phenomena, as well as other bizarre behaviors of black holes. Theory tends to move ahead of observations, as we’re more limited by our technologies than our own creativity. But more mind-bending realizations on nature’s most extreme objects are sure to come.

Previous articleHow MRNA Vaccination Was Invented
Next articleHave Your Say

Enormous Mysterious ‘Cavity’ Discovered In Space Scientists have discovered an enormous ‘bubble’, or cavity, in space that stretches across almost 500 light-years. The sphere-shaped void is...
Read more
Space

The Future Of The Sun

What will become of our Sun? The first hint of our Sun‘s future was discovered inadvertently in 1764. At that time, Charles Messier was compiling a list of...
Read more