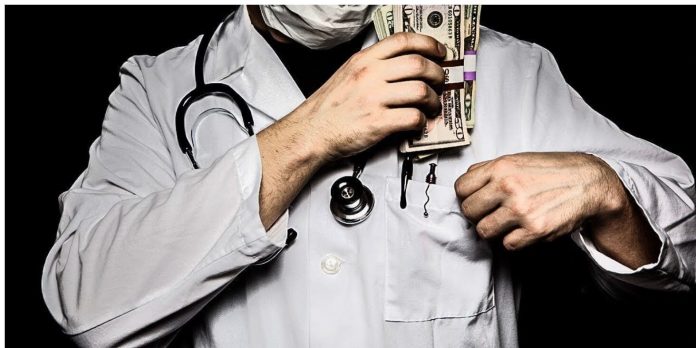 Brandy Vaughan was silenced after exposing Big Pharma and the dangers of vaccines.

The term “Big Pharma” is used quite often to describe massive pharmaceutical companies that make literally billions of dollars every year to keep Americans regularly supplied with a medicine cabinet’s worth of pills.

Big Pharma is all about making money by pushing vaccines, even if they are deadly.

Why does Big Pharma push vaccines that aren’t needed, or even deadly? It’s all about the money.

If you think Big Pharma is looking out for the health of people, you are gravely mistaken.

Bill Gates has a patent on covid, patent 060606. Interesting number.

You cannot patent anything in nature, but you can patent things that are MANUFACTURED.

President Trump said, “Big Pharma ran millions of dollars of negative advertisements against me during the campaign, which I won by the way but you know, you’ll find that out — almost 74 million votes,” said Mr. Trump during the briefing.

Once the word gets out on Big Pharma, they will lose millions of dollars, as will the politicians involved.

It is with a heavy heart I write this post on the passing of the very brave, Brandy Vaughan.

Brandy Vaughan fought hard to expose Big Pharma and the vaccines that were killing kids for big money.

Brandy Vaughan died of “natural causes” in her home after threats and multiple break-ins after exposing Big Pharma and the risks of taking vaccines.

Brandy Vaughan was a former high-level executive at Merck, one of the most powerful pharmaceutical groups on the planet. She blew the whistle on Big Pharma and was threatened multiple times for her to stop, and she never did.

Brandy Vaughan left Merck after discovering that Vioxx, medicine marketed by Merck, caused the deaths of over one hundred thousand patients worldwide. 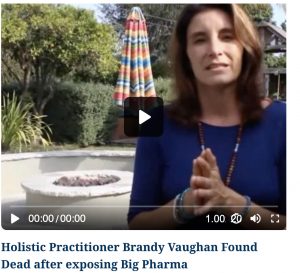 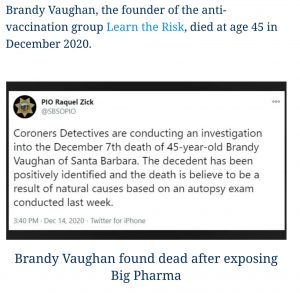 The post I wish didn’t have to write…But given certain sudden tragedies over the last couple of years, I feel it’s absolutely necessary to post these ten facts…and please screenshot this for the record.

1. I’ve NEVER had any thoughts of taking my own life, not once, ever. Even before I had my son.

2. I have a huge mission in this life. Even when they make it very difficult and scary, I would NEVER take my own life. Period.

3. Bastien means everything to me and I would NEVER leave him. Period. I have sole custody and he needs me as much as I need him. I would NEVER think of leaving him for a second.

4. I have NEVER been on an anti-depressant nor been diagnosed as depressed — don’t believe it if you ever hear anything like this.

5. I’ve NEVER taken a daily pharmaceutical drug. And I haven’t taken any pharmaceuticals in 10 years (and ten years ago it was one pill, one day). Nothing over the counter, nothing by prescription. In other words, I’m not on anything that could kill me unexpectedly or suddenly. I’ve never done illegal drugs either. Not even once.

6. There’s no way anyone could get into my house, no robbers, no angry exes (which I don’t have btw), no fanatical people — my house is like Fort Knox…unless it was someone super professional. It just wouldn’t be possible for anyone without highly special equipment and tactics (I.e. remotely taking down my high-level security system, which they have done before, unfortunately). But my place is also highly secure in a hard-wired kinda way. So even if the power was out, most people could still never get in.

7. If something were to happen to me, it’s foul play and you know exactly who and why — given my work and mission in this life. I’m also NOT accident prone. And I got the highest health rating possible when I went through a battery of medical tests a couple of years ago for my life insurance policy.

8. If something were to happen to me, I have arranged for a close group of my friends to start a GoFundMe to hire a team of private investigators to figure out all the details (I have the team and have passed the info on to them). Oh, and money for a PR firm to make It national news. There would be a press release sent to every journalist in this country (and more). It would not be swept under the rug, and it would be their worst nightmare.

9. There have been many on this mission or a similar one that have been killed and it’s time this bullshit stopped. The darkness cannot win.

10. I will NEVER stop speaking out for those who no longer can. Even if from the other side, where I imagine I would be FAR MORE powerful.

I have a team of angels surrounding me every step of this journey, but prayers of protection and love are ALWAYS appreciated.