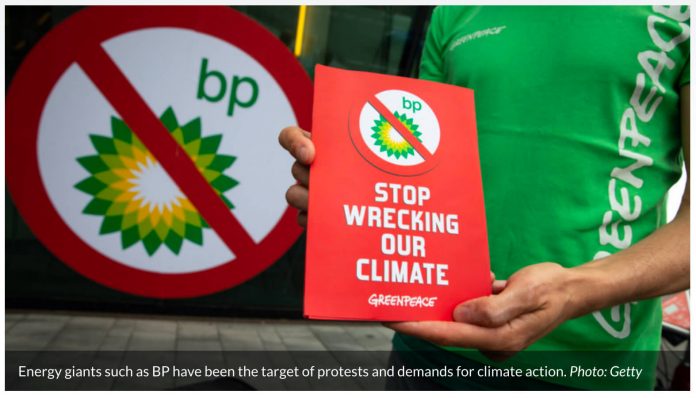 Energy producer BP has announced a bold plan to reduce its carbon footprint to net zero by 2050 by cutting more greenhouse gas emissions every year than produced by all of Britain.

The energy giant’s new boss, Bernard Looney, said the 111-year-old company had to reinvent itself – a move that will eventually mean more investment in alternative energy.

“The world’s carbon budget is finite and running out fast; we need a rapid transition to net zero,” Mr Looney said.

“We all want energy that is reliable and affordable, but that is no longer enough. It must also be cleaner.”

Under the plans, the British company will eliminate or offset all carbon dioxide emissions from its operations and the oil and gas it sells to customers by 2050. It also wants to halve the amount of carbon in its products by 2050.

However, it remains unclear exactly how BP will achieve such an ambitious target.

Carbon dioxide created by customers as they use energy makes up the bulk of the industry’s emissions.

Reducing that net difference to zero would require not only a shift to cleaner energy sources but also coming up with new technologies to offset emissions or extract CO2 from the atmosphere.

BP’s announcement, which came in a presentation in London on Wednesday that climate scientists, investors and journalists, follows similar moves by rival energy companies, including Royal Dutch Shell and Total.

Mr Looney – who is just two weeks into his new role as BP’s chief executive – acknowledged that targets and more specifics would follow.

“We’re starting with a destination,”‘ he said.

“The details will come.”

Today we announce our ambition – to be net zero by 2050 or sooner. Find out how we are fundamentally changing our organisation to deliver #bpNetZero

“How will they reach net zero? Will it be through offsetting? When will they stop wasting billions on drilling for new oil and gas we can’t burn?” he told the BBC.

“What is the scale and schedule for the renewables investment they barely mention? And what are they going to do this decade, when the battle to protect our climate will be won or lost?”

“We need to see a wholesale shift to a net zero economy by 2050,” said Stephanie Pfeifer, a member of the action group’s steering committee.

“This must include oil and gas companies if we are to have any chance of successfully tackling the climate crisis.”

Previous articleHave Your Say
Next article“Ignorance and burying her head is not leadership.”

Luxury Yachts To Be Exempt From EU’s Carbon Pricing Plan By Paul Homewood Only the decrepit EU could come up with this idea! If there is anyone still confused why...
Read more
Climate Change Bullshit

How Many Slaves Does It Take To Build A Solar Panel? Products that are fundamental to nearly all global “green pledges” — including electric vehicle...
Read more