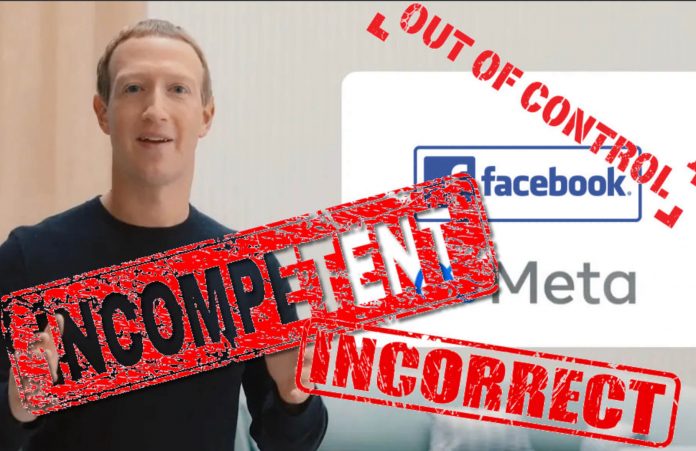 Facebook Faces Bankruptcy as Millions Flee Platform Due to Censorship

Facebook is hemorrhaging billions of dollars every single day and losing millions of users due to its overt censorship practices, according to a new report.

Meta, formerly known as Facebook, lost a whopping $232 billion, the biggest ever suffered by a U.S. company in a 24 hour period. By the end of April, it had lost another fifth of its value.

On top of that, Big Tech is finally facing government regulation – that includes Google, Amazon, Apple and Microsoft. Twitter has agreed to meet Elon Musk’s demands to be more forthright about exactly what the billionaire buyer would receive in his pending acquisition.

And, as American politics turns red next year, the regulatory efforts regarding Big Tech will zero in on free speech, with any luck.

Aside from all that, an interesting piece appeared in the Washington Post June 19. It was headlined: “Peter Thiel helped build Big Tech. Now he wants to tear it all down.”

Thiel is a former board member and investor for Facebook, the entrepreneur responsible for PayPal and a billionaire in his own right. According to the story, Thiel networks with Musk.

Here’s a quote from the Post story. Take it for what it’s worth:

Thiel and Musk may herald the rise of a new breed of tech billionaire, turning their deep pockets and distinct ideologies away from the companies that made their fortunes toward building a new version of the American right. It’s a powerful group that has the potential to anoint a rising generation of political leaders, transforming both the GOP and Silicon Valley.

I hope that’s true. We’re getting vibes along those lines from both billionaires.

He explains: “Peter deeply believes that there is huge opportunity in creating a parallel economy.” A former biotech CEO, Ramaswamy is the author of “Woke, Inc.: Inside America’s Social Justice Scam.”

There are more such disaffected people leaving Big Tech’s talons. The signs are everywhere. Perhaps more than anything else, the sheer size, influence and wealth of these Big Tech companies is raising concerns – and painting bullseyes on their backs.

“If successful, efforts to curb the power of these firms will change the world as we know it,” says a recent Newsweek piece. “It will either mean reducing our dependence on the digital tools these companies have pioneered and largely offer for free, or open up competition to new tech companies that aren’t so quick to invade privacy, transmit disinformation, spray advertising and support our worst behaviors.”

It adds: “Big Tech is facing a reckoning. It won’t go down without a fight, but there may be little it can do to stem the backlash.”

“The public seems fed up with being tracked by the tech giants,” reports Newsweek. “An October survey conducted by the Public Affairs Council and Morning Consult found that Americans rank the tech sector near the bottom of all major business sectors in trustworthiness; only the pharmaceutical, health insurance and energy industries earned less trust. That’s a huge shift from just four years ago, when the same poll found that the tech industry was deemed the most trustworthy. Surveys from four or more years ago suggested that many users were once willing to trade off some privacy for the convenience of online services and platforms, but the newer data suggests that deal is looking increasingly unattractive.”

Big Tech may be, in some cases, its own worst enemy. Apple’s move to block iPhone apps from tracking users by default may be just the first salvo in a war between Apple, Meta and Google to limit each other’s insights into their users, damaging all their businesses, and perhaps dragging down the entire online advertising industry. Greed has gotten the best of them!

“A lot of the effort to undermine these companies is coming not from the public, but from competitors,” explains Rob Atkinson, president of the Information Technology and Innovation Foundation. “Some of the biggest attacks are between the big tech companies themselves.”

Praise the Lord! Right? The monster of Big Tech can now be seen in all of its hideousness.

Unfortunately, it is far, far from the end of Big Tech. This is only the first time in six years I could even glimpse it.

But it’s in sight now: THE END.