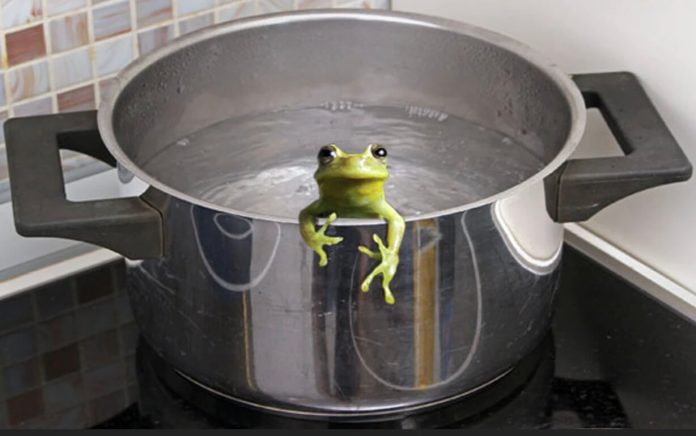 There was once a frog who had been captured by his country and put in a cage. As he was a very scared and naive frog, he believed it when told it was for his own good.  The frog was happy to be safe and not have to worry about predators. He loved the easy food, fully processed, preserved, and always available – even if unhealthy. Slowly he put on weight, didn’t exercise, and became very sick. His chronic conditions caused him to see the veterinarian and go to the hospital often. But the hospitals that he went to were focused on rules, regulations and money. They were set up as gatekeepers, to control healthcare access and make sure no one did anything wrong. They did not really care if he lived or died. They prescribed drugs that were expensive and poisoned his body, but the makers of the “medicines” made a lot of money on them and they shared that money with the veterinarians and hospitals.

The frog didn’t know any better, he accepted his fate and didn’t realize just how much the system was causing his demise. He became sicker and sicker. The sicker he got, the more he went to the veterinarians, who did not counsel him on healthy eating, well-being, community, and exercise, but instead locked him in more cages for hours on end and fed him medicines that helped in the short term but did nothing to cure his conditions. They did not offer him comfort or empathy. The veterinarians did not know of a better way to help people, they had never experienced healthcare that was healing, empathic, and health-based. They too were trapped in the system. The frog had no friends, he had no hope. Truly he felt like he was being boiled alive in chronic pain.

One day the cage door was left open. The frog ventured outside and thought that maybe he needed to find a better way. He ran far away from the country that imprisoned him and found a new place to live. At first, life was hard, as he had to capture his own food or trade for it. But he worked hard to become active, and fit and the process itself was invigorating. He found a local community. He found friends. His new companions gave him a reason to hope.  He felt alive again. Connected. Now, when he needed a veterinarian, which wasn’t very often – he found caring, empathic help, who could help heal him. The frog slowly regained his life back.

See the resemblance between this fable and the LIFE we are all living now?

Previous articleBig Tech In The Shit
Next articleHave Your Say