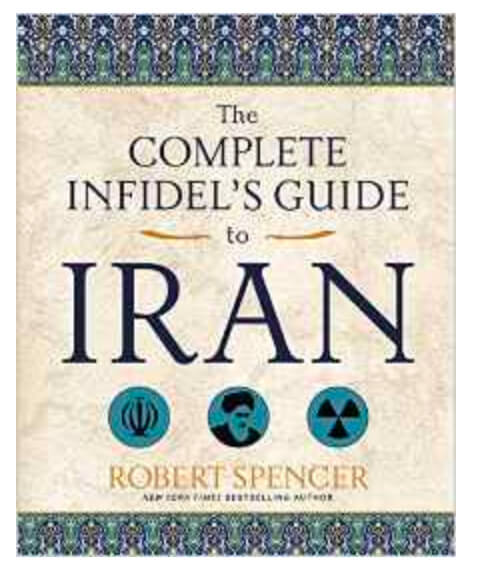 I wrote it in 2016, but I could have written it yesterday. The Complete Infidel’s Guide to Iran details the Islamic Republic’s militaristic aims, its support for global terrorism, its oppression of its own people, and much, much more, including exactly why Barack Obama’s late and much-lamented nuclear deal was so disastrous.

Here is the publisher’s statement about the book from 2016. This sentence jumped out at me: “The Islamic Republic is already at war with America. If we refuse to recognize that fact, we are only falling prey to the mullahs’ campaign of duplicity.”

Our Most Dangerous Enemy

Iran is the terrorist powerhouse of the world—made all the more dangerous by the disastrous “nuclear deal” that restricts Iran’s nuclear ambitions hardly at all.

The Iranian government is an open enemy of the United States—and of anyone who dissents from Shia Islam.

Iran confronts U.S. Navy ships in the Persian Gulf “on a near daily basis.”

It executes more of its citizens than any other nation.

It is a country torn by hypocrisy—lectured by mullahs, and with brutally enforced Islamic religious laws, but rife with alcoholism.

Once America’s ally, Iran now claims leadership of the global jihad, and the ayatollahs’ aim is nothing less than world conquest for Islam.

How the Iranian “nuclear deal” is sheer capitulation to the mullahs, allowing Iran to inspect its own facilities and pursue nuclear weapons

Why Iran wants nuclear weapons—clue: it’s not about deterrence

A new grand strategy: how Iran’s Shi’ite terrorism might be contained and its threat to the United States reduced

The Islamic Republic is already at war with America. If we refuse to recognize that fact, we are only falling prey to the mullahs’ campaign of duplicity.

The Complete Infidel’s Guide to Iran exposes the true nature of the threat, lays out what America must do to defeat it, and gives you all the information you need about America’s least understood yet potentially most lethal foe.

“The brilliant and courageous Robert Spencer rips to shreds the claim that the Iran nuclear deal will bring peace to the world, and shows the truly shocking extent to which Iran is a threat to the stability not just of the Middle East, but of the entire world — and has been for decades while all too many American leaders have dithered, temporized and appeased it. The Islamic Revolution (enabled by Jimmy Carter), the hostage crisis, the Green Movement — it’s all here, including little-known facts about Iran’s role in 9/11 and its sponsorship of terror around the globe. Here is the one book that will put to rest forever the idea that the Islamic Republic will ever be a peaceful member of the family of nations, and shows what’s at stake if our leaders continue to pretend otherwise.” (Lt. Gen. William G. “Jerry” Boykin, Deputy Undersecretary of Defense for Intelligence (2002-2007))

“Robert Spencer has succeeded where many fail, sweeping through Iran’s history with a sure touch and an eye for the essential. He has also understood the monumental significance of Iran’s material contribution to the September 11, 2001 plot. Despite sectarian enmity, Sunnis and Shia can get along just fine when it comes to killing Jews and Americans.”  (Kenneth R. Timmerman, President, Foundation for Democracy in Iran)

“Robert Spencer is arguably the most knowledgeable, authoritative and prolific of American infidels with respect to sharia, jihad and their most dangerous state sponsor: the Islamic Republic of Iran. Naturally, his is the complete guide for what all of us — Muslim and non-Muslim alike — need to know about Iran.” (Frank Gaffney, Center for Security Policy)

“Simultaneously, Iran is the modern iteration of one of human history’s richest civilizations and a paranoid jihadist state bent on global conquest, the destruction of Israel, and ‘Death to America.’ It is our most immediate threat, yet one strangely remote from our understanding. In The Complete Infidel’s Guide to Iran, Robert Spencer punctures our common misconceptions and Washington’s dangerous delusions about Iran, bringing to bear his unique blend of fearlessness, erudition, and clear-eyed analysis. All Americans, and most especially the political class, would do well to read this highly accessible book and grasp the challenge that confronts us.” (Andrew C. McCarthy, bestselling author, National Review contributing editor, and former federal prosecutor)

“Iran is the gravest threat to world peace today, and in this essential new book, Robert Spencer explains why. From all the astonishing details of just how disastrous Obama’s nuke deal is to Iran’s continuing war footing toward the U.S. and Israel and the shocking beliefs that may lead the Iranians to decide to nuke Israel, it’s all here. The Complete Infidel’s Guide to Iran should be placed on the desk of every official in Washington — especially in the Oval Office.” (Steve Emerson, Investigative Project)

“This masterpiece illuminates the most lethal threats against America and civilization today. Iran aims at global and hegemonic control through its terror networks, which are widely dispersed over the planet. Robert Spencer’s vivid, lucid and comprehensive record of Iran’s genocidal apocalyptic nuclear program gives us an invaluable and perspicuous tool for understanding current crucial topics. Essential reading to prevent mass extermination.” (Bat Ye’or, author of Eurabia : the Euro-Arab Axis)

“Eye-opening. Sobering. Informative. Gripping. The Complete Infidel’s Guide to Iran is a comprehensive and unique look at the world’s foremost and most dangerous rogue state. It’s what every American needs to know about the world’s leading state sponsor of terrorism. Robert Spencer makes it all clear: Iran’s magnificent history and terrible present, the full horror of the Obama/Kerry nuclear deal, Iran’s global anti-U.S. and anti-Israel adventurism, its role in 9/11, and the warped theology that makes it so eager to destroy Israel. No one who cares about America’s future and the survival of the free world should miss this book.” (Pamela Geller, President, American Freedom Defense Initiative)

Have just got it on apple books. Will report on how it read. Looks interesting.

Previous articleSafety In Numbers?
Next articleHave Your Say