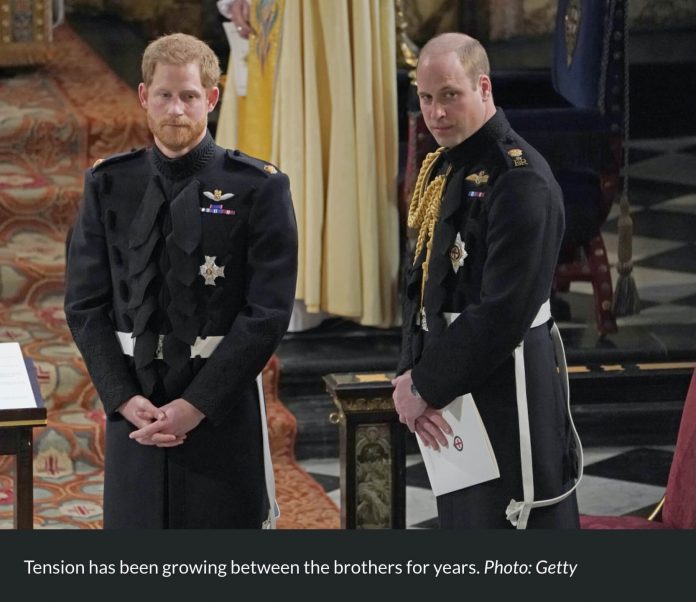 A new royal tell-all has hit shelves, this time detailing the animosity between Prince William and Prince Harry.

Battle of the Brothers: The Inside Story of a Family in Tumult, by historian Robert Lacey, explores the tensions that arose with Harry and Meghan’s whirlwind romance.

“The fundamental conflict was between the two males who had known each other all their lives and had never hesitated to tell each other exactly what they thought and felt,” Lacey writes.

“William worried that his brother was moving too fast in his courtship – and he did not shrink from saying as much when Harry started talking about getting hitched to Meghan quite soon.

“According to another source on this crucial and much-reported confrontation between the brothers that occurred sometime in late 2016 or early 2017, William couched his question in terms of apparent concern for Meghan.”

Lacey’s book goes on to suggest that the Duke of Cambridge’s reservations about Markle were less about his younger brother’s wellbeing and more about the impact his bride would have on the reputation of the Crown.

“’Waity William,’ of course, took so long to commit to Kate for the sake of the monarchy. He had been auditioning her for a job all those years.

“So Harry could not help but wonder whether Wills was really concerned about his personal happiness—or whether he was, once again and as per usual, thinking about the makeup and fortunes of ‘The Firm’ whose boss he would become one day?

“The response from Harry was a brusque and offended pushback.

“Here we have a couple of brothers who loved each other dearly – most profoundly and genuinely, in fact – but who could give as good as they got when it came to a clash over something that mattered intensely to them.

“For William it was the future state of his monarchy – his sacred trust; while for Harry it was the love of the complex and captivating woman who had finally made sense of his life.”