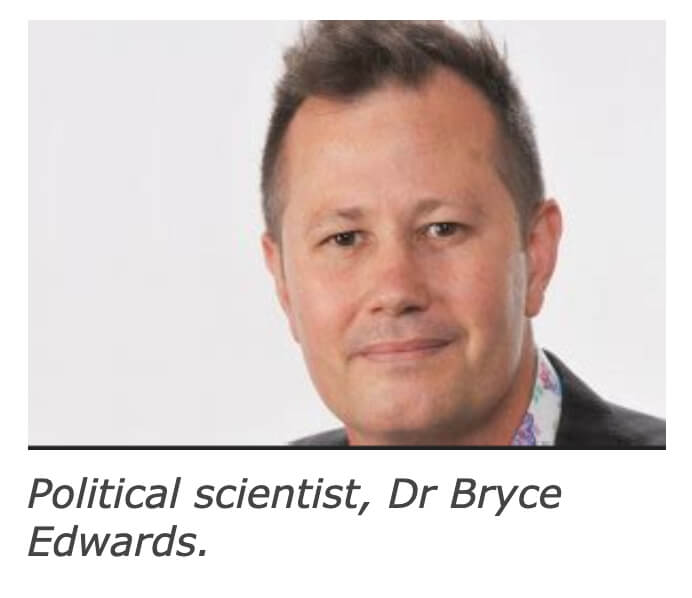 Could the quarantine and testing botch-ups have an impact on the election? The Government might have been hoping that the scandal was a one-week wonder, but the stories of quarantine and testing fiascos keep coming and will be felt strongly by the public. Many voters will now have much less confidence in the Government’s handling of the Coronavirus health crisis, and there is a risk of that flowing through to the election campaign.

Public losing faith in the Government

The Government’s extremely high polling is based on its competent and successful management of the Coronavirus crisis. I was quoted by the Guardian in the weekend suggesting that “The public clearly thought that this government deserved support due to that competency and this is a major blow to that narrative” – see Charlotte Graham-McLay’s From celebration to dismay: the week Covid-19 re-emerged in New Zealand.

Sunday Star-Times editor Tracy Watkins says “The damage done by the government’s border fiasco is almost incalculable” and for the public it’s “been a massive breach of trust” – see: The only way to restore confidence is to order an urgent inquiry into our border failures.

Watkins argues that the public, having made immense sacrifices to beat Covid-19, naturally expected the Government to play their part: “we believed we had entered into a solemn contract with the Government. Their end of the deal was to use that gift of time wisely; the lockdown was their time to plan, to prepare – and to execute a world-class system that would make all the sacrifices worth something. World-class border measures, world-class detection and quarantine procedures, and world-class contact tracing systems. That was the contract.”

She argues the “Government’s border measures have been exposed as farcical”, and for the public it’s as if “all that effort has been thrown back in their face.” Watkins says the only way to restore confidence is a truly independent inquiry.

For Newstalk ZB’s Heather du Plessis-Allan, the scandal has serious political implications: “The impact of this may be that it showcases Woodhouse as a solid performer in National, knocks a bit off the PM’s frothy popularity and reminds a few voters of the Government’s trouble in getting its actions to match its rhetoric. But the biggest disappointment to the Government must be that this blemishes its otherwise fawned-upon health response. Just weeks out from the election, that would’ve been quite the trump card to be able to play” – see: Labour has squandered its trump card (paywalled).

The Government is more concerned “to show Things Were Being Done” about the border mess, rather than fixing the issues or showing accountability, says du Plessis-Allan, with many “pointless announcements” being made to try and spin the problem as being under control. She believes the Government may be hoping that the stories will blow over, and the public will regard the scandal as a “beltway” issue.

Herald political editor Audrey Young is in no doubt that the public will have lost some confidence in the Government over the “deluge of debacles”, showing “just how fragile confidence has been” in the Government’s handling of the crisis. Furthermore, it’s the Prime Minister who may be particularly weakened by the scandal, because it involves another example of her “tolerance of weak ministers” – see: Deluge of debacles over Covid-19 but a swift response from Jacinda Ardern (paywalled).

National has been pushing the narrative that Labour’s talent pool in Cabinet is shallow, and Young says this is only reinforced by the fact that Ardern has had to hand responsibility for the border problems to “Ms Fix-it” Megan Woods, who is already busy attempting to salvage KiwiBuild and running Labour’s election campaign.

What’s more, Young says National leader Todd Muller and health spokesperson Michael Woodhouse have performed well over the issue. Young says: “It has been political gold for National to have a health issue to concentrate on, a departure from its usual focus on the Government’s ability to lead the economic recovery.”

This could all have a massive impact on the election according to new BusinessDesk columnist Jane Clifton, who points out that if more is to come on this scandal, then “the border issue will be an election disruptor, endangering Labour’s commanding lead.” She argues that “Even if little or no covid is found to have spread from such idiocy, the breach of faith with voters could be massive” – see: Good old-fashioned incompetence (paywalled).

Clifton argues that the problem of lost confidence could get worse: “Politically, the border lapses risk multiplying that sentiment many times because people may now feel lied to as well as let down. They were told the border was subject to strict isolation lockdown – by officials and politicians who, it turns out, never actually checked whether that was so.”

Furthermore, she argues that there are many other elements that appear to have been mismanaged or at least not honestly dealt with by the Government – especially in terms of the supply of protective equipment for health professionals, and contact tracing capacity.

Other political journalists are pointing out that such failures could quickly erode the Government’s seemingly secure lead in voter popularity. Thomas Coughlan warns against complacency: “Ardern shouldn’t rest on her stratospheric polling. In a time of national crisis, the numbers move fast. Just ask President George H W Bush who went from being one of America’s most popular presidents to one of its least in the space of a year in 1992. If Ardern can’t find someone to hold to account, voters may decide accountability rests with her” – see: Heads have to roll over border catastrophe, but whose head should it be?.

Today, the New Zealand Herald editorial argues that trust can evaporate quickly: “Basic and obvious competence is the secret sauce any government and ministry need to maintain trust. Incidents that appear to be at odds with what people believed was happening can cast doubt on the bigger picture. People reassess their impressions with fresh information. A long series of blunders can seriously erode confidence in leadership. The drifting poll data for Trump and British Prime Minister Boris Johnson are current examples of that” – see: Our coronavirus reality check is a timely wake-up call.

Who’s to blame? And should anyone be taking responsibility for the fiasco? This is best examined by Thomas Coughlan in his column, above, in which he discusses New Zealand’s constitutional accountability arrangements. He looks at the various candidates for blame: Minister of Health David Clark, Director-General of Health Ashley Bloomfield, John Ombler who is overseeing the government response to Covid-19, and former Police Commissioner Mike Bush, who has been in charge of the isolation facilities.

Coughlan argues that it’s hard to disentangle the fault, but it seems to be a classic case of the Government coming up with good policies in terms of dealing with Covid at the border, but failing to implement these properly, or at least failing to ensure systems were in place so that the policies wouldn’t fail. And Coughlan suggests that this has been the pattern throughout the crisis.

Some people are blaming the two women who were given compassionate leave to drive from Auckland to Wellington. This focus is misguided according to Andrea Vance, who argues that “if anyone deserves kindness, it is these women. A flawed system failed them, just as it did the rest of us” – see: If there must be anger, direct it at those who set unrealistic expectations. She says, “If there must be anger then it should be directed at those who allowed the quarantine system to break down.”

A Stuff editorial defends Director-General of Health Ashley Bloomfield, arguing that although the failures are unforgiveable, we should forgive the person in charge – see: Bloomfield can be forgiven – this time. The newspaper says of Bloomfield: “He is like a football player who creates three marvellous goals against the opposition but then scores an own goal.”

Audrey Young says there’s been a consistent lack of transparency throughout the crisis from the Ministry of Health. In this latest case, “even more disturbing was what else it showed about the Ministry of Health’s systems and its lack of records and procedures. Bloomfield has been unable to quickly produce figures as to how many others who had been granted a compassionate exemption had not been tested. Even yesterday – some four days after the case of the sisters – he was unable to give that figure and indicated the ministry would be gathering the statistics later.”

Does David Clark need to go?

None of the candidates for blame come out of this well. But in Thomas Coughlan’s investigation, he comes down hardest on the Minister of Health: “If there are repeated failings at the Ministry, then Clark is certainly at fault for repeatedly failing to appropriately audit what the health ministry said it was doing. Clark’s angry disavowal of all and any culpability – pushing the blame back on the ministry – is embarrassing. If he’s not responsible for the ministry, then the prime minister should find someone in her caucus who is.”

Of course, Clark has already been in trouble, and although Ardern continues to express confidence in him, a recent Newshub Reid Research poll showed that 57% of the public want him gone, with only 36% wanting him to stay.

Making the strongest case for his departure is John Armstrong, who argued yesterday that Ardern has continually chosen to protect Clark, and this is a big mistake: “Keeping him in that post was a mistake. It was a mistake then. It is an even bigger one now. It quite possibly ranks as the biggest mistake of Ardern’s tenure as prime minister” – see: David Clark is Minister of Health in name only after calamitous Covid-19 testing bungle.

Regardless of Clark’s guilt, Armstrong says his firing is a simple necessity: “sometimes it is necessary to cut through what is a tangled constitutional web and sack a minister from the Cabinet if only to clear the air and restore public confidence and trust in the way a particular portfolio is being managed. In Clark’s case, that time is long past. He should be long gone.”

Similarly, Duncan Garner gives his advice to Ardern about Clark: “I would sit him down and ask him what he knew about the weaknesses in our border and quarantine testing, given the latest and avoidable mess we find ourselves in. If he knew all about it and had said nothing, I would sack him. If he knew nothing and had clearly asked little questions, I would sack him” – see: David Clark leaves people with the impression he’s barely capable of ordering his own coffee – sack him.

Garner argues that Clark’s previous mistakes have been seriously superseded by this controversy: “much, much, much more important than those sideshows is the serious lack of performance and judgement when it mattered most. The Prime Minister looks compromised and weak holding onto Clark. Yes, she’s a formidable communicator but she has failed to send her weakest and errant ministers the tough message when it’s needed most. She needs to be more ruthless with Clark”.

Finally, what role have the media played in the scandal? For a positive evaluation, see Hayden Donnell’s The journalists who helped save New Zealand’s health response, and for the negative version, see Chris Trotter’s Flat Earthers: For how much longer must New Zealand be damaged by Neoliberalism’s demented perceptions of reality?. 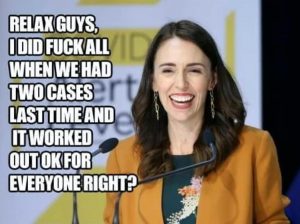