You Stupid Boy
Home Freedom of Speech Cancel culture. What is it?

Cancel culture. What is it? 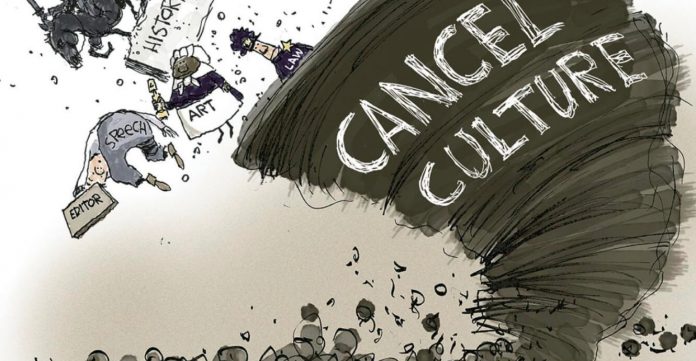 There’s definitely a space where free speech has been curtailed. It’s called the workplace.

‘Cancel culture’ is the latest buzzword in the war over free speech. To those who use this term it means people being fired for what they say and think, usually for something deemed politically incorrect. According to them, mobs of Twitter lefties now chill free speech for public figures of the right – and for their most beloved constituency, ‘ordinary people,’ by which they generally mean their supporters and themselves.

It’s tempting to dismiss cancel culture as a ploy by right-wingers to play the victim. They have laughed for years at what they call the ‘Oppression Olympics’ – the supposed competition between oppressed groups to see who has it worst. By posing as the victims of left-wing censorship, they think they can finally win the gold medal.

But we should resist that temptation because cancel culture does exist. It has lasted a long, long time. Many people have indeed been forced from their jobs and kept out of work for speaking their mind. It just so happens that the real cancel culture targets other ordinary people: those who hold left-wing views, speak up on the job about their employers, or simply join and organise trade unions.

Real cancel culture goes by an older name: the blacklist. Its operation has chilled free speech where unions and left-wing ideas are concerned for the last 200 years. If we want to defend free speech for everyone and stop people from being hounded from their jobs for their opinions, we should think much more about the one space where freedom of speech has never really existed: the workplace.

Where cancel culture comes from.

The denial of free speech at work goes back to the early years of the Industrial Revolution, when British and American bosses had the law on their side. Unions remained wholly or partly illegal well into the nineteenth century. As those restrictions ended, employers developed other methods to keep the spirit of the First Amendment from the factory floor.

In nineteenth-century America these methods developed into an art form. Employers shared the names of troublemakers and union agitators among themselves so that none of their workers would be infected by union talk, and their scribbled notes became the blacklist. Some went further and made all their employees sign a so-called ironclad oath (later known as the ‘yellow-dog contract’), which legally forbid them from union membership. One union leader, Terence Powderly, later recalled the atmosphere formed by these methods in the depression-plagued 1870s:

“No one connected with organized labor dared to allow his name to appear publicly as a member. The blacklist would be employed and idleness, poverty, destitution, and perhaps death would be the reward of open identification with a labor union in that era.”

The great allies of employers in this war on free speech and association were the private detectives. Businesses such as the Pinkerton Detective Agency offered corporations a range of services such as strike-breakers, spies at work and even agents provocateurs to identify union members, make the lists and oaths effective, and discredit unions in the eyes of the public. Under corporate direction, armies of private detectives unleashed violence against unions on a scale not seen in any other industrialized country. Free speech for workers was chilled, not by tweets, but by bullets and spies.

In the twentieth century, British employers substituted the desk jockey for the detective. In 1919, wealthy industrialists teamed up with a former head of Naval Intelligence to create the Economic League to defend free enterprise and oppose the Reds. The League developed a simple method: its researchers read through all the left-wing publications they could find to identify left-wing people and place their details on file. Trotskyists, Communist Party members and other subversives went on their blacklist. Over time they added activists on single-issue campaigns. Their strangest victim was Syd Scroogie, a blind and disabled war veteran from Dundee. His crime was a letter in the local newspaper in the 1980s praising the council’s support for Nelson Mandela.

After the Second World War, the League became more than a private thought police; it also began a profitable partnership with British companies to blacklist union troublemakers, especially in the construction industry. Active union members and workers who raised safety concerns on the job had their details passed on by companies to the League, and ended up on the list. Many never found work in their industry again. Police and intelligence officers contributed to the files, as did – to their eternal shame – some rogue trade union officials.

The League folded in 1992, discredited by repeated exposés of its work in the press. Its files passed to the Consulting Association, which maintained and updated them, and which was raided by the Information Commissioner in 2009 for breaking data protection laws. Several lawsuits later, building companies have paid compensation upwards of £55 million to victims of their blacklist.

The rot extended to the public sector, including what right-wingers see as a key bastion of the woke left: the BBC. Well into the 1980s, BBC managers weeded out what they called “subversives” – mainly Trotskyists and Communists, with some National Front types thrown in to maintain that all-important BBC balance. The civil service had a similar system, and MI5 debriefed school inspectors to gauge the degree of subversion among teachers. By these means, secret police saved the public from readers of the Militant newspaper. 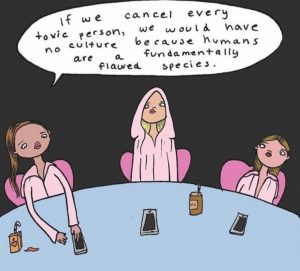 These examples only begin to trace the larger war that has been waged by employers against free speech at work. We have no idea how many people’s lives have been ruined by the blacklist. There is no way to gauge the damage done to unions over time by the cancellation of their members’ rights. All we can say is that the numbers run into many thousands, and the damage was great. Compared with this long and vast attempt to not only chill free speech, but freeze it, complaints about cancel culture today seem petty.

They are also misdirected, because the war on free speech at work goes on. We need only return to April 2020 when Amazon fired Christian Smalls, a worker at its Staten Island warehouse, for raising safety concerns at the height of the Covid-19 pandemic’s first wave. Or the way that Facebook marketed its new employee communications app, “Workplace,” by suggesting to prospective clients that they could stop certain words from trending on the app’s feed. The word they chose as an example was “unionize.”

Employers now arm nineteenth-century tactics with twenty-first century tech. Yellow-dog contracts, banned in 1932, are again in vogue with some American bosses. While they are no longer enforceable in law, they send a clear signal to workers who might otherwise consider joining a union. Armies of Pinkertons no longer roam the land in search of unions to bust, but an industry of anti-union consultants use industrial psychology and big data to help companies predict where workers might organise. One consultant advertises his services in this way:

“With our platform, they can literally log into the platform and have the answer to that question, and say, ‘We see that 20% of that group is at risk of unionization.”

That might be hubris talking, but there are other signs that employers will seize on the smallest thing to stop unions. In 2018, someone leaked a training video meant for Amazon managers; its purpose was to help them find out if their workers were unionising, and what they could do and say to prevent it. The video warned supervisors to listen out for suspicious phrases like “the living wage,” a sure sign of union agitation. Even worse, it warned employers to be on their guard if workers took the drastic step of hanging out together after work.

Social media gives companies new ways to limit freedom of speech at work. Employees can be disciplined, warned, or even fired for ‘bringing the company into disrepute’ by posting critical comments online. The charge of reputational damage to companies by employees can be easily made and hard to disprove. It serves as a catch-all to stop workers from expressing public dissent on the job.

Self-styled defenders of free speech should take note. When they moan about a war by the left on the right to say what you think, they should remember that almost all the men and women thrown out of work for their views have been members of left-wing parties, or workers who wanted to join a union or protest against the actions of their bosses.

This is what cancel culture has really meant in the past. This is what it still means now, and until the free speech warriors of the right are willing to drip their scorn on the people who practice it most – the corporations and public bodies that try to stamp out free speech at work – they convict themselves of wanting rights for themselves but denying them to others.

Nor can the rest of us remain neutral. The powerful will always make their voices heard, so any move to limit what people say and think will hit those who work for someone else. If we want to honour the thousands of lives ruined by the blacklist, we should tell anyone on the Left who does want to shut people up: don’t cancel, organise.

Previous articleBond lives on.
Next articleHave Your Say

New Variant – Now What? A Humorous Look Written by Saeed A. Qureshi, Ph.D. So far, it has not bothered its viewers but looks scary because...
Read more
Freedom of Speech

New Variant – Now What? A Humorous Look Written by Saeed A. Qureshi, Ph.D. So far, it has not bothered its viewers but looks scary because...
Read more