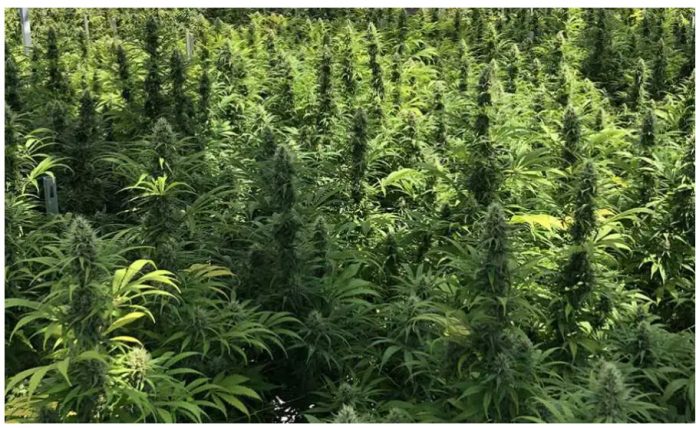 FCBD treatment also substantially increased IL-6 and IL-8 expression in macrophages. FCBD:std, while maintaining anti-inflammatory activity in alveolar epithelial cells, led to reduced phagocytosis and pro-inflammatory IL secretion in macrophages in comparison to FCBD. The phytocannabinoid formulation may show superior activity versus the cannabis-derived fraction for reduction of lung inflammation, yet there is a need of caution proposing cannabis as treatment for COVID-19.

FCBD reduced IL-8 levels more than dexamethasone at 4 µg/mL, and reduced IL-6 and IL-8 to levels similar to that of the crude extract. The crude extract and FTHC led to substantial cell death (61 and 42 percent viability, respectively), whereas FCBD at 5 µg/mL was comparatively less cytotoxic.

In addition to CBD, FCBD contained CBG and minute amount of THCV. The IC50 of a combinations of active phytocannabinoid standards (FCBD:std) at the relative concentrations found in FCBD were similar to that of the original fraction in the alveolar epithelial cell model.

Treatment with CBD by itself led to a reduction in IL-6 and IL-8 levels in an inverse bell-shaped dose–response in alveolar epithelial cells; i.e., only 3 µg/mL was active whereas other CBD concentrations exhibited lower or no cell activity. These results are in line with an earlier publication suggesting that CBD has a bell-shaped dose–response for anti-inflammatory activity by Gallily et al.

CBD is a negative allosteric modulator of CB1 signaling. TRPA1 is a receptor in alveolar epithelial cells involved in the pathogenesis of several airway diseases including chronic obstructive pulmonary disease and asthma. Both TRPV1 and TRPV2 interact with phytocannabinoids, including CBD, CBG and THCV. Also, TRPV1, TRPV2 and TRPA1 were found to be associated with pulmonary inflammation.

In addition to reducing IL-6 and IL-8 levels, FCBD and FCBD:std reduced the expression levels of CCL2 and CCL7 in alveolar epithelial cells by 6 h treatment. The systemic cytokine profiles detected in severe COVID-19 patients includes increased production of inflammatory chemokines such as CCL2. Moreover, CCL2 and CCL7 were shown to be abundant in bronchoalveolar fluid from severe COVID-19 patients and were associated with recruitment of monocytes into the lungs.

Our results suggest that treatment with FCBD or FCBD:std may lead to reduced secretion of inflammatory cytokines associated with the disease, and possibly to a reduction of macrophage recruitment during the cytokine storm. However, dexamethasone was more effective than FCBD in reducing both CCL2 and CCL7 expression.

IL-7 was shown to raise lymphocyte counts in septic patients with low absolute lymphocyte counts and to restore protective immunity in patients that suffer from CD4+ T cell deficiency (e.g., as in the case of HIV infection). It was suggested that treatment against SARS-CoV-2 infections should also attempt to increase IL-7 levels. The fact that FCBD:std reduced IL-7 expression only to a minor extent in comparison to dexamethasone or FCBD suggests that using purified phytocannabinoids may have an advantage over cannabis-derived fractions for COVID-19-like inflammation.

The ACE2 receptor is a part of the dual renin-angiotensin system (RAS). ACE2 was shown to be involved with SARS-CoV-2 human infection; the ectodomain of the S protein of SARS-CoV-1 binds to the peptidase domain of ACE2 with relatively high affinity. In cells of patients with severe symptoms of COVID-19, ACE2 was substantially upregulated 199-fold; this upregulation was suggested to be one of the factors leading to disruption of the RAS, as ACE2 is a part of the counteracting hypotensive axis of RAS.

The increase in ACE2 and other key RAS components is predicted to elevate bradykinin levels in multiple tissues, leading to increases in vascular permeability and hypotension; the latter is highly associated with severe COVID-19 patients. Indeed, a negative correlation was identified between ACE2 gene expression and COVID-19 mortality. FCBD reduced the expression level of ACE2 at 4 and 6 h post treatment.

In the first phase of the disease, a specific adaptive immune response is needed to eliminate the virus and to prevent disease progression to more severe stages. Indeed, the dysfunction of alveolar macrophages are among the abnormal characteristics in some severe COVID-19 patients, and an abundance of increased inflammatory monocyte-derived macrophages replaces tissue-resident alveolar macrophages in patients with severe disease.

Additionally, during SARS-CoV-1 infections that provoke a disease course similar to those seen during infection with SARS-CoV-2, a marked reduction in macrophages phagocytosis activity was detected. Also, phagocytosis was important in the antibody-mediated elimination of SARS-CoV-1 in a mouse model.

Notably, FCBD and FCBD:std, and CBD to a lesser extent, led to a marked increase in macrophage polarization and to cell actin remodeling that corresponds to the growth of filopodia-like membrane structures. FCBD reduced expression of SCARB1; SCARB1 encodes SR-B1 that is a scavenger receptor (class B) and is also responsible for phagocytosis of silica particles in macrophages.

However, FCBD treatment also led to an increase in FcγRII and CD36 gene expression. Phagocytosis is initiated by the ligation of Fcγ receptors to IgG-opsonins on the target cell, whereas CD36 expression in macrophages was shown to be involved with lung fibrosisin in mice. Alveolar macrophages play an important role in Fc receptor-mediated responses during acute virus infections and in phagocytosis-mediated clearance of respiratory virus infections.

CD36 is an important scavenger receptor for phagocytosis of Streptococcus pneumoniae, a primary bacterial agent associated with pneumonia, which is down regulated by influenza. Indeed, FCBD led to a marked increase in the internalization of silica particles by macrophages, and in so doing, increased levels of phagocytosis.

Possibly, the increase in macrophage polarization and phagocytosis, and the upregulation of FcγRII and CD36 expression in these cells following FCBD treatment may facilitate phagocytosis-mediated clearance of respiratory viruses, and benefit the first phase of the immune response to SARS-CoV-2.

However, it should be noted that macrophages themselves can be infected by the virus, as SARS-CoV-1 infects macrophages as a result of IgG-mediated phagocytosis that requires FcγRII receptor signaling pathways. Advantages and disadvantages of increasing macrophage phagocytosis activity should be carefully considered.

Indeed, FCBD contained multiple terpenes, some including γ-Curcumene and Guaiol at considerable percentages. The presence of terpenes in FCBD may account for the differences in activity between FCBD and FCBD:std.

During the second phase of COVID-19, pneumonia patients exhibit features of macrophage activation syndrome (MAS) in which macrophages play a major pro-inflammatory role by releasing pro-inflammatory cytokines such as IL-6, IL-8 and CCL2. Moreover, subsets of macrophages in patients with COVID-19 were found to express genes associated with IL-6, whereas expression of IL-6 was again associated with severe depletion of lymphocytes from the spleen and lymph nodes.

Notably, FCBD led to a marked increase of IL-8 expression and IL-8 protein levels in macrophages. It also led to an increase in IL-6 expression levels, above that induced by PMA. These results suggest a substantial, in vitro, pro-inflammatory role for FCBD in macrophages. However, FCBD;std was less active in ILs induction, again demonstrating a notable difference between FCBD and FCBD:std, which may originate from the presence or absence, respectively, of terpenes.

To conclude, treatment with cannabis compounds CBD, CBG and THCV may have clinical value in reducing cytokine secretion in lung epithelial cells. However, treatment with FCBD containing terpenes in addition to these phytocannabinoids substantially induced macrophage phagocytosis and increased their IL levels.

Yet, to confirm more specifically the pro-inflammatory effect of FCBD in macrophages it is necessary to perform the same experiments on primary alveolar macrophages (e.g., from mice). Nevertheless, these results suggest a pro-inflammatory role for cannabis extract that is higher than that of the phytocannabinoid standard mix.

The increase of macrophage-secreted IL-6 and IL-8 levels by cannabis-based treatment may potentially lead to a worsening of the “cytokine storm” identified in severe COVID-19 patients.

It should be stressed, in agreement with Pastor et al, that for now, users and healthcare personnel should avoid the use of cannabis for COVID-19 prevention or treatment.

Previous articleHave Your Say
Next articleEvidence of Truth Or Lies