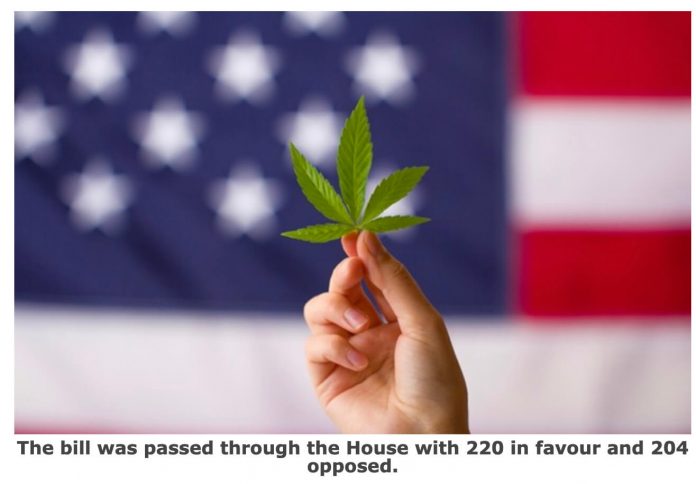 US House of Representatives passes bill to decriminalise cannabis nationwide

The US House of Representatives has cleared a bill to decriminalise cannabis, paving the way for the drug to be legalised across North America and removed from the list of controlled substances.

The Marijuana Opportunity Reinvestment and Expungement (or MORE) Act promises to eliminate non-violent federal marijuana convictions for anyone who manufactures, distributes or possesses the substance.

It aims to establish procedures for wiping previous convictions from an individual’s criminal record and will impose a 5% tax on the sale of cannabis products.

Money to be made

There is potentially a lot of money to be made for the US Government if state-level experience is anything to go by.

California was one of the first jurisdictions to legalise marijuana use recreationally, with the move generating more than $1.34 billion in marijuana tax revenue over the following 24 months.

Legal cannabis sales in that state are projected to reach $54 billion by 2025.

The landmark bill could also potentially save the US Government hundreds of millions of dollars in law enforcement and incarceration costs.

The congressional budget office estimated it would reduce the federal deficit by nearly $4 billion over the next 10 years.

At present, marijuana is listed as a Schedule I drug under the Controlled Substances Act, meaning it has a high potential for abuse, has no currently accepted medical use in treatment in the US, and has a lack of accepted safety for use under medical supervision.

If the Democrat’s bill is passed by the Republican senate and signed by president Joe Biden, it would remove the drug from this Act and align the treatment of cannabis possession nationwide.

The proposed bill would make small business administration loans and services available to legitimate cannabis-related businesses while setting standards for them.

As cannabis remains a federally-controlled substance on par with much harder drugs such as heroin, banks insured by the federal government have traditionally been reluctant to make their services available to the growing marijuana industry.

Sales in the marijuana industry totalled $26 billion in 2020 and are projected to more than double by 2025, according to the bill.

But those transactions have been conducted largely in cash, without the aid of banking services.

US democratic congressman Jerrold Nadler, who has sponsored the bill, said it was well overdue at a national level.

“For far too long we have treated marijuana as a criminal justice problem instead of as a matter of personal choice and public health,” he said.

“Whatever one’s views are on the use of marijuana for recreational or medicinal use, the policy of arrest, prosecution and incarceration at the federal level has proven both unwise and unjust.”

It is not yet known if the bill will sail through the senate, with some Republicans questioning why cannabis was under the microscope in preference of “higher national priority issues” such as rising food and fuel prices and the Russia-Ukraine war.

Other members have claimed that marijuana is a “gateway drug” which allows users to eventually move on to more addictive substances.

The bill needs to secure 60 votes to pass the senate.

This week’s proposal is the latest effort to decriminalise marijuana across the US.

In December 2020, a version of the bill cleared the house but stalled in the senate.

The recreational use of marijuana has become legal in 18 US states, while a total of 37 states and four territories allow the use of it for medical purposes.

The drug remains illegal at a federal level.

How To Grow Your Own Out Of This World Cannabis Bonsai Tree Growers have experimented with creating cannabis bonsai, primarily to produce clone clippings from...
Read more
Cannabis Referendum