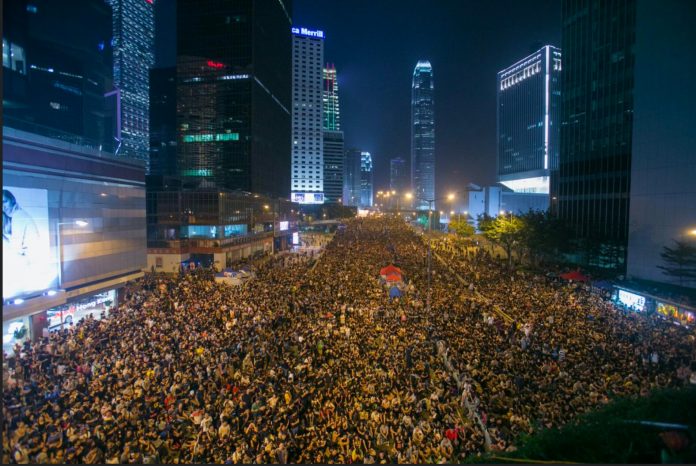 The Chinese Communist Party appears to be trying to take advantage of the global fixation on the pandemic to achieve their goals. One of the pro-democracy Hong Kong legislators described his fear that we may be witnessing “the end of Hong Kong as an international financial and business center.”

That may very well turn out to be the case if China continues their crackdown unchecked, but the impact on the freedoms traditionally enjoyed by Hong Kong residents under the control of Great Britain will probably be taking an even worse beating. It may not just be the end of Hong Kong as a financial center, but a complete shift toward what looks more like a “one country, one system” policy where Hong Kong is essentially just another province under the thumb of Beijing. And at least thus far, leader Carrie Lam is singing the CCP’s tune in a pitch-perfect fashion.

Hong Kong leader Carrie Lam says her government will “fully cooperate” with the Chinese parliament to safeguard national security, which she said would not affect rights, freedoms or judicial independence.

“We are not wealthy people and not financially sound. To earn a living is of the utmost importance so as to feed my family,” said Ben Ip, 45, a mechanic and owner of a vehicle paint shop in the city’s Tai Hang district.

“As an ordinary Hong Kong citizen, we want to have a stable life in a safe environment. The law may speed up some people to leave … it can be a good thing in the longer run, leading to a calmer Hong Kong.”

They’ve reached the point where some of the residents are actually hoping that the pro-democracy protesters will simply give up and leave the country, which is rather sad. But some of those activists will probably be considering that option carefully in the near future. The new social order under these “national security” laws is going to look very different. Details of the law are thin, but that’s largely because the laws are so vague. It’s basically a ban on anything the CCP doesn’t like. CNN recently assembled a roundup of some of the ways these laws are already being applied on the mainland and it’s chilling to say the least.

Nobel Peace Prize winner Liu Xiaobo was sent to prison for “inciting subversion of state power.” (Which could mean virtually anything.) He died behind bars of cancer without ever leaving the prison. Uyghur economist Ilham Tohti was given a life sentence for “separatism.”

Journalist Gao Yu was sent to jail for seven years for “illegally providing state secrets to foreign entities.” (She had given an unclassified, internal CCP document to a foreign media outlet.) A pastor named Wang Yi got seven years for “inciting subversion of state power.” (You can translate that as… “talking.”) Lawyer Zhou Shifeng received an identical sentence for “subverting state power.”

In other words, under the new law, Hong Kong residents can be detained, rushed through some sort of Kangaroo court and tossed into a dungeon for the act of saying anything that the CCP disapproves of. China was already in the process of cracking down on democracy-minded residents of Hong Kong, but they’d previously left at least a facade of some sort of Democratic process in place. It now appears that they’ve grown tired of the charade and are ready to bring down the hammer.

The real question is, what, if anything, can the United States and the rest of the west do about it? Slap more sanctions on them that they’ll just ignore anyway? Let’s face it… we’ve got a lot on our collective plates already and nobody is seriously talking about military action against China in defense of Hong Kong. (Or Taiwan for that matter.) The CCP clearly doesn’t want to let a good global crisis go to waste and they’re seeking to take advantage of it. And it really looks like they might get away with it.