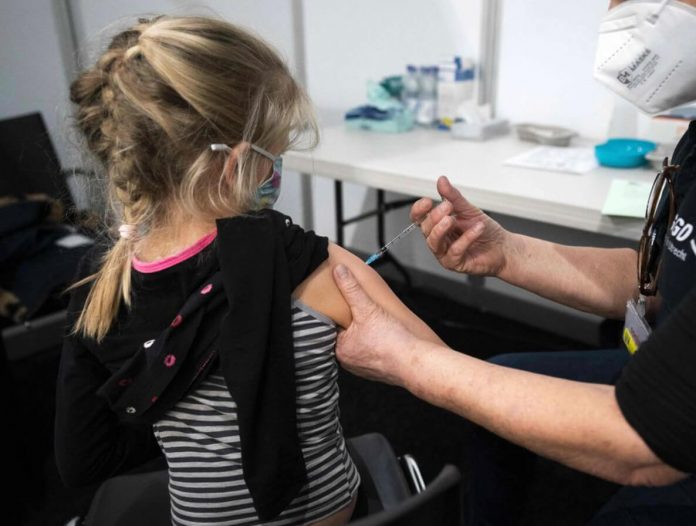 Letter to the Editor Cairns News

Two more little angels taken by the jabs, just 12 minutes from where I live on the Gold Coast. Bet you won’t hear about this on the 5:30 – 6pm news!

Below is the gist of the story:

Extract from what looks like a tweet by Krystle Lee Candy: “This is so crazy I actually know this person she’s a very lovely lady and her 2 babies passed away. I am so sorry hun and I am here for u if u need me”.

Yesterday at the Pacific Pines MedCentre. 9.20am
A Mum, with 3 young girls was attending to have the girls vexed for [“C-word 19”] – I added the words incorrectly – just in case. The girls were aged 6-10.
While I was in the waiting room, the girls came back out of the room where they had been injected, to wait for 20 minutes to ensure they were ‘alright’. Within about 10 minutes one of the younger girls hands and face suddenly tightened, her neck muscles were straining and she started convulsing. She was uncontrollable.
The nurse screamed for Dr. Wilson Chin say “you’re the vaccine stand doctor, do something”. Then not more than 30 second later, the older girl, aged about 9, did exactly the same thing. Violent convulsions. The Mum was totally distraught. She was screaming in despair. The doctor could do nothing. All the Mum could say was “I’m so sorry, I’m so sorry”.

Don’t know what happened to the 3rd young girl, but this makes me so angry, I just cried.

Editor: Every Premier of every state, the PM, the AMA and the TGA and many others are complicit in the murder of little kids (and many adults). Let us all pray we live long enough to see them at Nuremberg then the gallows. Dr Wilson Chin does practice at the above clinic.

The guys on BFD Backchat are talking about a child dying at the clot shot station in Greymouth today and apparently within an hour or so the parents got an email from the MoH offering $450k to keep quiet. Obviously it has to be confirmed but two people who know the family confirm it. 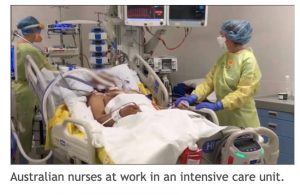 FROM Queensland to California to the UK and Europe, dedicated health professionals are speaking out against the big pharma-driven genocide agenda taking place in hospitals, made worse recently by the immoral, unlawful imposition of fascist vaccine mandates.

In Australia 30-year career nurses like Debbie Jane Harris have quit under pressure from the vaccine mandate and have spoken out against the horrors of vaccine-induced injuries and deaths being suffered by thousands of Australians but ignored and covered up by imbecile ministers, clueless chief health officers and bent bureaucrats who inhabit bodies like the TGA, AHPRA, ATAGI and the AMA.

The exact same horrors and lies exposed by nurse Harris have also been exposed by whistleblowing health professionals at Ventura County Hospital in California and published in the Conejo Guardian by journalist Joel Kirkpatrick.

As in Australia and everywhere else suffering under the WHO-Gates-Rockefeller-Fauci medical mafioso, Kirkpatrick describes the totally corrupting effects of COVID-related protocols, vaccine mandates and politically and financially motivated bullying of medical staff.

“Before COVID, nurses, staff and the community were confident in treatment modalities and in doctors’ competencies,” said one nurse. But now, “People are confused.” They are also shocked that doctors and administrators refuse to report rising numbers of unexplained medical problems in otherwise healthy people as potential adverse reactions to COVID-19 experimental vaccine shots.

Nurses said that to suggest the shots were the cause of any medical problem or contributing to the alarming rise in non-COVID-related hospital populations, invited professional ridicule with certain staff refusing to believe they were anything but “the safest thing ever produced”.

Yet these same doctors and medical staff who have chosen to run with the narrative have no explanation for the increase in non-COVID-related ailments, including a reported increase in heart attacks in young people, mainly men, who received the COVID-19 vaccines. Doctors in Australia and California “chalk it up to genes”, the whistleblower nurses said.

These were the same nurses who watched in amazement in early 2020 as media and governments everywhere screamed that the hospital COVID wards were about to be overrun, while reality was telling another story. Twenty months on, nurse Harris in Queensland discovered there had only been six Covid patients in ICU at her hospital all that time. Was this the real reason for those ridiculous “dancing nurses” videos that surfaced everywhere? They were supposedly a noble effort by the frontline workers to lift morale but more likely part of the organised psychological operation.

Across the Pacific at Ventura County, nurse Daniel sent his wife and kids to live elsewhere for a month and a half while he prepared to handle “the rush of dead and dying” but “nobody came.” The hospital cancelled elective surgeries and only six COVID patients turned up in the ICU there as well.

And then the “unmentionable” began to happen – the number of non-COVID patients boomed. There were pneumonia cases, strokes – more than normal – and women with venous sinus embolisms. The US nurses reported seeing many auto-immune issues: rashes on the body, the body attacking the nervous system, producing symptoms like a weakening of the muscles.

One patient presented with severe respiratory distress and went into respiratory failure, with symptoms first showing three weeks after he took the Pfizer shot. His lungs were completely destroyed, totally wrecked, Daniel said.

One healthy nurse in her twenties who Daniel knew went into cardiac arrest three weeks after her Pfizer shot. An aortic dissection ruptured her aorta like a balloon. She underwent open-heart surgery and made a full recovery but would not believe the COVID vaccine shots had caused it.

Nurse Davis, speaking at a public meeting at the Gold Coast in November 2021, broke down when she began to relay the post-vaccination adverse events, which at both locations remain mostly unreported. They include the clotting, bleeding, brain bleeds and heart attacks, stillborn and deformed births.

COVID-related data amounted to what one US nurse called “voodoo statistics.” In her unit and others, they are no longer testing everybody for COVID. Rather, they test only those who are symptomatic and those who say they are unvaccinated. The daily figures spouted by CHOs and media are totally misleading because they deliberately cover up the fact that 80 percent of the people in the ER are vaccinated, while only 40 percent of Ventura County is vaccinated.

The US nurses found in a recent group of COVID patients at one hospital, the sickest ones were double-vaccinated. Nurse Daniel said the first to die had both Pfizer shots.

Equally appalling is the enforced treatment of COVID patients with a highly dangerous “approved” drug called Remdesivir. Dr Bryan Ardis has gone on Rumble to expose the scandalous use of the drug that Dr Anthony Fauci has brazenly lied about. It blocks the kidneys and can kill patients by causing a type of internal drowning of organs.

Meanwhile the response of medical authorities in both countries has simply been to cover it all up and reward administrators with virtual bribes for reporting skewed and incorrect statistics. Most notorious among Australian whistleblowers is the Australian Health Practitioners Regulation Agency (AHPRA) and the Australian Medical Association.

A retired doctor from Logan Hospital near Brisbane said AHPRA were interfering with and dictating to doctors in overt acts of overreach. Truth and freedom were the casualties, he said. Nurses were also threatened with having their social media pages monitored. The US nurses relayed similar stories of medical bullying, especially against the unvaccinated nurses.

So warped had procedures become in the Ventura county hospital that people were literally left to die on the COVID floor, as happened to one young patient with an autoimmune bowel issue. Her condition worsened, and “nothing was really done” until she went into cardiac arrest and died.

Now, with lawless and brutal vaccine mandates imposed and the loss of many veteran staff like nurse Harris, health care at Australian and Californian hospitals is in crisis. And the fools at AHPRA and the AMA twiddle their thumbs, spin-doctoring their latest phony statistics to media and politicians between their pharma-sponsored cocktail gatherings.

The thousands of staff who left these hospitals because they are appalled by the results of Pfizer, Moderna and AstraZeneca’s fraudulent, failed jabs, no longer exist. A recent interview on Australia’s ABC news covered the staffing crisis but in an Orwellian twist, simply ignored the fact of the vaccination mandate and those who had been kicked out of the system.

But the tide of deceit may be turning. Nurse Daniel knows “a lot of [health care workers] who will not get a booster shot”. “They felt like they took a huge risk. I know a lot of people who felt terrible for months after the shot, and they don’t want to experience that again,” he told the Conejo Guardian.
The newspaper reported that more than half of the nurses they spoke with were “heading for the exits” and looking to retire or move to another state to continue their careers. Nurse Daniel said he had “lost all faith in the medical field” and suspected money was pushing the drugs more than evidence. Independent thinkers like him were the enemy now.

“The state sees you as an opposition force, for your opinion,” he told the newspaper. “All these mandates and enforcements are not based off of science; they’re based off of peer pressure. Fear, politi­cal, emotional manipulation.”

Like their Aussie counterparts, the Californian nurses are looking to create private member association hospitals, where unvaccinated people can go to work in their own separate, parallel system. Already the Aussie nurses are organising their own state and federal groups under the Red Union banner.

Previous articleYou Heard It Here First
Next articleHave Your Say