China Cannot Be Trusted Ever Again 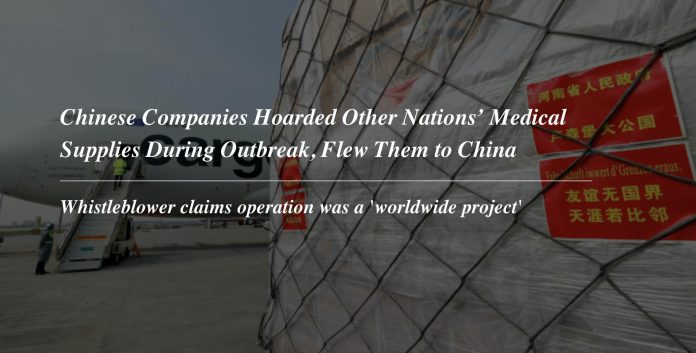 Massive supplies of critical medical gear have been hoarded by major Chinese companies in other countries and flown to China during the Wuhan coronavirus outbreak, according to reports.

Chinese property developers with offices in Australia organized multiple planeloads of critical medical equipment to be sent from Sydney to Wuhan and other parts of China, according to the Sydney Morning Herald.

The operations — at least one of which was executed worldwide, according to a whistleblower — saw employees ordered to suspend normal tasks and spend weeks sourcing and stockpiling items such as surgical masks, gloves, thermometers, hand sanitizers, and protective coveralls and outfits from around Australia and beyond.

“The chartered plane with 90 tons of medical supplies, including 100,000 most needed protective coveralls and 900,000 pairs of medical gloves, has successfully departed from Sydney and arrived in Wuhan on 24 Feb.,” announced a recent LinkenIn post from Risland Australia — a Chinese property development company whose major stakeholder is Yang Huiyan, the richest woman in Asia — the Herald reports.

Another Chinese-owned company, Greenland Australia, reportedly executed a similar scheme in Australia and other countries.

“Employees of Greenland Australia, a subsidiary of the Chinese government-backed global property giant Greenland Group, were instructed to put their normal work on hold and source bulk supplies of essential medical items to ship back to China,” the Herald reported, citing a whistleblower who said it was a “worldwide project.”

The Greenland Group reportedly hoarded and shipped an estimated 3 million respiratory masks, 700 hazmat suits, and 500,000 pairs of gloves to China.

Australian hospitals are now facing a scarcity of some of these critical supplies.

“The shortage of personal protective equipment in NSW hospitals is scandalous,” a medical worker told the Herald. “Doctors and nurses on the front line feel inadequately protected, exposed and vulnerable.”

The number one lie so far this week from our PT PM: "COVID KILLS" I kid you not. On Saturday night on TV One, when announcing...
Read more
Chinese Virus

From RNZ News Multiple people in the February cluster have flouted the self-isolation directives: the latest, a 21-year-old who visited numerous locations while potentially infectious. On...
Read more