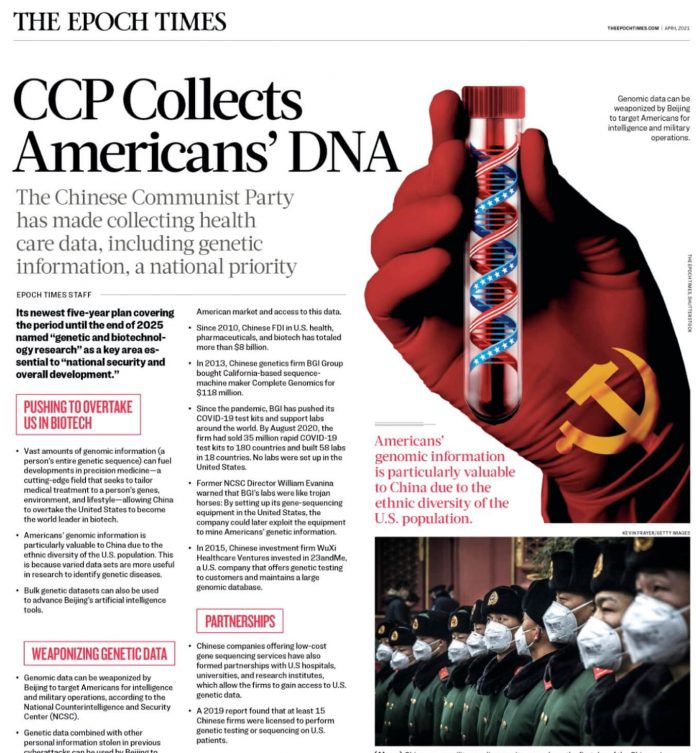 WHY DOES CHINA COLLECT AMERICANS’ DNA?

As a Technocracy, China’s Technocrat scientists believe that the future of mankind lies in the engineering of its collective DNA. Nevertheless, China’s agressive collection of American DNA should be doubly-alarming because it can only spell one ultimate outcome: bio-warfare. That is, genetically engineering viruses or other diseases that will be selectively harmful to U.S. populations.

It has been relatively easy for China to acquire American DNA, and what it could not get through semi-legal means, it simply stole.

Anyone who is unable to discern this strategy being applied to America is either naive, blind or deceived by Chinese propaganda that tells you it can’t possibly be true.

Previous articleHave Your Say
Next articleApple Does It Right

Letter To A Friend

A Letter to My Vaccinated Friend By James Kullander You texted me: “I miss my friend.” And I replied, “I miss you, too.” Aside from that,...
Read more
Human Stupidity

IS VACCINE ‘HESITANCY’ THE NEW IQ TEST? By Howell Woltz AT THE RICHARDSON POST, WE FOLLOW THE SCIENCE – AND IT BODES POORLY FOR THE VAXXED “According...
Read more