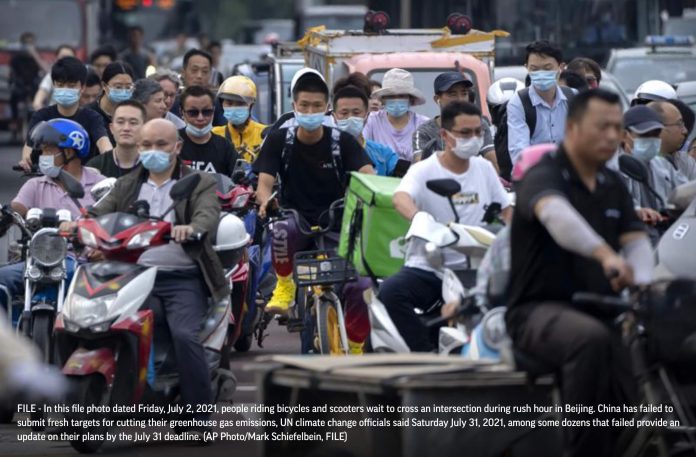 In a warning shot across the bows of Joe Biden and Boris Johnson, China, India, and 85 other nations have decided to ignore a UN deadline to submit its pledges for cutting CO2 emissions in time for the UN climate summit in Glasgow later this year.

To underscore their opposition to Joe Biden’s and Boris Johnson’s Net Zero agenda, India has snubbed the UK’s climate meeting last week while China is rolling back its climate policies in an attempt to prop up its economy.

Meanwhile, South Africa has demanded that developed countries should set a target of $750 billion a year to help poorer nations transition to renewable energy.

The latest demands and developments look increasingly like a farcical repeat of the fiasco of the Copenhagen climate summit (COP15) in 2009.

As seasoned COP observers remember, after two weeks of deadlocked negotiations in Denmark’s capital, the leaders of Brazil, Russia, India, China, and South Africa (the so-called BRICS nations) took charge of the climate summit which was on the brink of disaster and drafted the final communique behind closed doors.

A humiliated US President Obama had to gatecrash the meeting while the entire EU was excluded from the meeting and the final statement.

In many ways, Copenhagen’s diplomatic and political fiasco was a historical watershed that marked the turning point when 500 years of Western dominance was symbolically terminated by China and India.

If Boris and Biden are not very careful, they may face a very similar situation in Glasgow. If push comes to shove there is a pretty good chance that China and India (together with a number of emerging nations) could take over a deadlocked COP yet again and draft an agreement that suits them and humiliates the US, UK, and the EU.

There is, of course, one shrewd game plan to avoid a Copenhagen-type fiasco: Boris Johnson could simply pull the plug on current summit plans, turn COP26 into a virtual conference, and blame Covid for the failure to achieve a breakthrough.

After all, Boris has developed a habit of kicking irreconcilable issues into the long grass … just saying.

BERLIN (AP) — China and India have missed a U.N. deadline to submit fresh plans for cutting their greenhouse gas emissions in time for the global body to include their pledges in a report for governments at this year’s global climate summit, officials said Saturday.

The world’s two most populous countries are among dozens that failed to provide an update on their targets for curbing the release of planet-warming gases to the U.N. climate change agency by July 31.

China is the country with the world’s highest emissions, while India is third. The United States, which submitted its new target in April, is the second-biggest global emitter.

U.N. climate chief Patricia Espinosa welcomed that 110 signatories of the United Nations Framework Convention on Climate Change had met the cut-off date, which was extended from the end of 2020 due to the pandemic. But she said it was “far from satisfactory” that only 58% had submitted their new targets in time.

Saudi Arabia, South Africa, Syria, and 82 other nations also failed to update their nationally determined contributions (NDCs) in time to include them in a report Espinosa’s office is preparing for the U.N. climate change conference in November.

Espinosa noted that a previous report found countries were doing too little to meet the goal of keeping global warming below 2 degrees Celsius (3.6 Fahrenheit) by the end of the century compared with pre-industrial times, let alone the more ambitious target of capping warming at 1.5 degrees C (2.7 degrees F).

“Recent extreme heatwaves, droughts and floods across the globe are a dire warning that much more needs to be done, and much more quickly, to change our current pathway,” said Espinosa. “This can only be achieved through more ambitious NDCs.”

Under the 2015 Paris climate accord, countries set their own emissions reduction goals but are required to be transparent about them and jointly raise their targets over time to ensure that global warming remains at agreed acceptable levels.

Previous articleThe World Is Truely Stuffed
Next articleHave Your Say