The foreign ministers of China and India, Wang Yi and Subrahmanyam Jaishankar, will meet today on the sidelines of a conference in Moscow. Their conversation is sure to be frosty: earlier this week, a four-month stand-off between the two countries’ armed forces escalated into warning shots being fired in the western Himalayas. This was the first discharge of guns between the two nations in 45 years.

Chinese president Xi Jinping and Indian prime minister Narendra Modi have so far refrained from speaking to each other to defuse the tension. Worryingly, the belligerence from the Chinese bears resemblance to its tone before the two countries went to war in 1962. ‘The Chinese troops will resolutely fulfil their duty and defend China’s territorial integrity,’ the Chinese foreign ministry spokesman warned.

Last week, Indian soldiers took control of a strategic mountain spot. The Chinese foreign ministry spokesman called this ‘a serious military provocation’. Former Indian army lieutenant general, H S Panag, a veteran of the 1962 war, felt ‘it would be difficult for China to swallow the bitter pill’. This tension comes just months after China’s People’s Liberation Army killed 20 Indian soldiers in brutal hand-to-hand combat. Several rounds of talks between military commanders and diplomats have failed to defuse the situation. So what will happen now?

There’s been a continuous build-up of manpower and munitions along the Line of Actual Control (LAC) by both armies, including deployment of tanks and missiles, and coordinated exercises with their respective air forces. India knows that China has nuclear missile launching facilities in Tibet and Xinjiang and is constructing another at the India-Nepal-China tri-junction. As a result, India has shifted emphasis from Pakistan to China by stationing nuclear weapons at undisclosed locations facing the Chinese frontier. On 8 September, India successfully tested a hypersonic missile delivery vehicle. 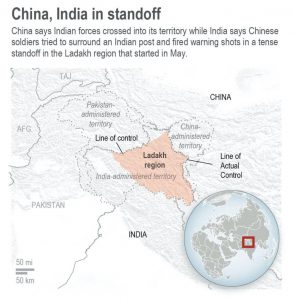 We can trace the roots of this tension back to December 1978, when the Chinese Communist Party embraced its then paramount leader Deng Xiaoping’s visionary roadmap to become exporter-in-chief to the world. However, China’s rise to monetary and military superpower status has increased its intolerance of competition in Asia. Consequently, India’s progress since its landmark economic reforms of 1991 – albeit diminished lately under Modi – has on the one hand benefitted Beijing’s exports and on the other made it wary of its future potential. And the analysis that China was unlikely to rock the boat because of its significant trade turnover and surplus with India, has been disproved by an assertive Xi, whom Modi majorly misread.

The equanimity of Modi’s predecessor Manmohan Singh ensured China’s erratic tendency did not spill over into violating agreements signed between the two nations in 1993, 1996 and 2013 to maintain ‘peace and tranquillity’ on the LAC. But Modi’s ‘muscular’ foreign policy – blended with ganging up with the United States – has resulted in an upping of the ante by the Chinese, with Modi blissfully continuing to believe he can win over Xi. Only current western hostility towards China provides a safety valve to India, for now. 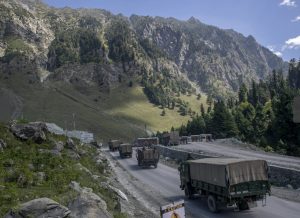 But this border issue still comes at a difficult time for India. With a -23.9 per cent contraction in India’s GDP in the April-June quarter (and Goldman Sachs predicting a -14.8 per cent dip for the current financial year overall) in contrast to a Chinese growth of 3.2 per cent in the same period, the gap between the sizes of the their economies has widened further. With no real stimulus imparted by the Indian government to meet the Covid-19 challenge, an estimated 140 million Indians are jobless. Where China has aggressively contained the virus, Modi’s religious rather than scientific response has raised a spectre of India heading for the highest number of cases and deaths in the world.

The claim that China sensed India as being at its weakest and therefore ripe to be rendered a jolt is unconvincing. It doesn’t make sense either diplomatically or in terms of durable gain. Admittedly, there was never total trust between the two powers. But there was 20 years of relative understanding since the 1993 treaty when the border dispute was thrust into the back burner, trade burgeoned and most importantly kept the peace.

Xi’s shock treatment signals the death of ‘peace and tranquillity’ and a resumption of a cold war between the Asian giants. The parties are too deeply entrenched for there to be a positive outcome to the Wang-Jaishankar meeting. ‘I don’t believe there is ground for much optimism,’ a former Indian ambassador to China Nirupama Rao has said. H S Panag, in an article in the Indian press, wrote ‘I foresee a repeat of 1962…..I expect the (Chinese) reaction any time hereafter’. He is theoretically correct, since conditions for military manoeuvres are well-nigh impossible in the Himalayas in winter. The all-out conflict 58 years ago occurred in the autumn of that year. Could a repeat be on the cards?