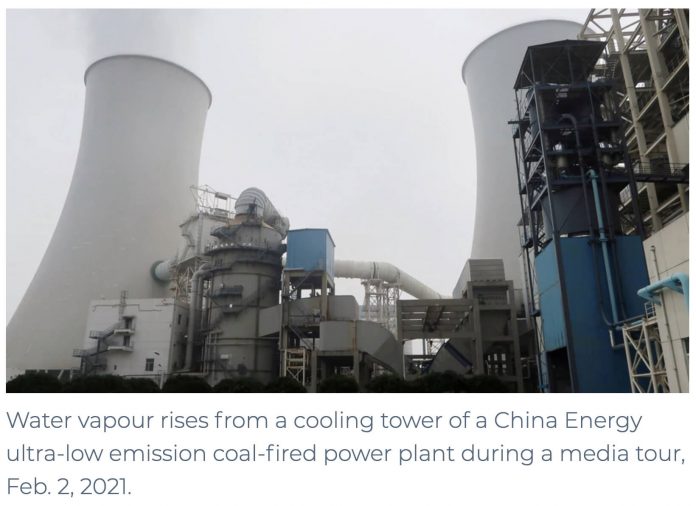 China put 38.4 gigawatts (GW) of new coal-fired power capacity into operation in 2020, according to new international research, more than three times the amount built elsewhere around the world and potentially undermining its short-term climate goals.

The country won praise last year after President Xi Jinping pledged to make the country “carbon neutral” by 2060. But regulators have since come under fire for failing to properly control the coal power sector, a major source of climate-warming greenhouse gas.

Including decommissions, China’s coal-fired fleet capacity rose by a net 29.8 GW in 2020, even as the rest of the world made cuts of 17.2 GW, according to research released on Wednesday by Global Energy Monitor (GEM), a U.S. think tank, and the Helsinki-based Centre for Research on Energy and Clean Air (CREA).

China approved the construction of a further 36.9 GW of coal-fired capacity last year, three times more than a year earlier, bringing the total under construction to 88.1 GW. It now has 247 GW of coal power under development, enough to supply the whole of Germany.

A team of central government environmental inspectors delivered a scathing assessment of China’s energy regulator last Friday, accusing officials of planning failures and focusing too much on guaranteeing energy supply.

The NEA had allowed plants to be built in already polluted regions, while projects in less sensitive “coal-power bases” had not gone ahead, they said.

China has been criticized for pursuing an energy-intensive post-COVID recovery based on heavy industry and construction, and experts say new coal plants could end up becoming heavily-indebted “stranded assets.”

“Hopefully as the Chinese government determines its coal power capacity targets for the next five-year plan (for 2021-2025), it will severely restrict if not end new coal plant builds and accelerate retirements,” she said.

Do these silly little researchers really believe the Chinese government will pay the slightest attention to their witterings?

I note they also repeat the fake claims about capacity often made by Greenpeace:

Quite what China’s economic decisions have to do with some beardies at Greenpeace is beyond me. But the reality is not what they want you to believe. China is still desperately short of reliable power generation, and will need much more in coming years as their economy continues to grow:

No wonder they are desperate for that good Australian Coal. The CCP would rather freeze it’s population than be seen as losing to Australia.