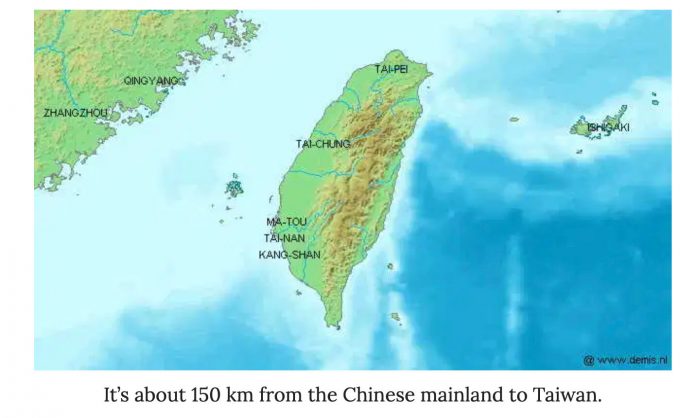 What a Chinese Invasion of Taiwan Would Mean For Australia.

It is the Chinese themselves who repeatedly say they have not ruled out the use of force to take Taiwan.

Americans at the highest level of military command have said there is a strong possibility of Chinese forces invading Taiwan. So have Taiwanese government ministers. So have countless strategic analysts.

That there is a real chance of military conflict is an undeniable given. …

It is an island democracy of 24 million, a 24-carat democracy that breaches nobody’s human rights. It has a different history from China but was generally part of China until 1895 when the Japanese took control.

After World War II it reverted to mainland Chinese control in 1945. Beijing was then governed by the anti-communist Kuomintang party of Chiang Kai-shek.

The Chinese Communist Party defeated the KMT in the Chinese civil war, and Chiang and his forces fled to Taiwan where they set up a government, and a nation, in exile. The KMT was pretty autocratic in Taiwan but it democratized in the 1980s and Taiwan has been stable, peaceful and prosperous ever since, with a free media, hi-tech industries, the peaceful rotation of power and the stable rule of law.

So in the past 124 years Taiwan has been ruled directly by Beijing for just four years, the last time more than 70 years ago.

When the US established diplomatic relations with Beijing in 1979 it established a diplomatic formula to cover Taiwan. Both Washington and Beijing agreed there was “one China” but they also declared that Beijing would seek reunification through peaceful means.

The US passed the Taiwan Relations Act, which commits it to maintain Taiwan’s security and holds that neither side — neither Beijing nor Taipei or Washington for that matter — can change the status quo by force.

China’s President Xi Jinping has declared that it must be absorbed and the issue cannot pass “from generation to ­generation”. …

There is no chance at all, zero, that Australia could sit out such a conflict. Depending on how serious the conflict became, Australia affords a raft of attractive targets for a Chinese military seeking to hurt the US and its military capability.

The Joint Defence Facility at Pine Gap is the most obvious. It is a critical link in Indo-Pacific signals intelligence. At a time of US-China conflict, it would be focused overwhelmingly on operational intelligence about China.

It is also through Australian facilities that the US gets early warning of ballistic missile firings in this part of the world.

In a serious conflict, Beijing may want to blind the US, which would make Australian communications facilities high-priority targets. The same probably applies to our over-the-horizon Jindalee Operational Radar Network, which has a long-range and would certainly be militarily relevant. …

Our most important capability would be our Collins-class submarines. These would be out and about for intelligence gathering purposes but might well play a direct role in combat. The Chinese military might think it worth knocking out the Stirling submarine base south of Perth. …

An alliance is a two-way street. The US alliance is the single most important factor of Australian security.

In any kind of US-China conflict that went for more than a couple of weeks, say one around a Chinese blockade of Taiwan, it is very likely that Australia would contribute F-35 fighters, Wedgetail command and control aircraft, or electronic warfare Growler aircraft to work as part of the American force. These presumably would operate out of Guam or some other US-allied base. …

Economic consequences (over 30% of Australia’s exports go to China):

Few countries in the world would suffer more severe or immediate dislocation than Australia in the event of any conflict. …

The global economy would probably shatter into two rival systems, a US system and a China-dominated system. Even if this happened a little less fully than we might forecast, the consequences for Australia would be huge.

For a start, all of our exports to China would stop immediately. Whether that was Beijing’s decision or Canberra’s wouldn’t matter. It is completely inconceivable that we could export iron ore to a nation that was at war with the US. It just wouldn’t happen. ….

Who would win a conflict?

Beijing is trying to win the Taiwan conflict without firing a shot by convincing the world that its triumph is inevitable and would be swift and that resistance is futile.

In fact, this is not remotely true. Taiwan is 130km from mainland China. It is difficult water to cross and Taiwan is a difficult island to invade. In World War II, US commanders decided Okinawa would be easier to invade than Taiwan.

It is true that China has an overwhelming military superiority against Taiwan and that Taiwan has not done enough to make itself an unbearably costly prize. But Taiwan could do this relatively cheaply. Just as Beijing has adopted an asymmetric military strategy against the US, so other nations need to adopt asymmetric strategies against Beijing.

If Taiwan deployed several hundred smart sea mines, these would make it all but impossible for Beijing to transport the vast numbers of troops it would need across the Taiwan Strait.

Why There Are So Few Female Chess Grandmasters. By Walter Block. At the time of writing, there are 1,731 chess grandmasters, the acknowledged leaders in their field....
Read more
World News

Microsoft vs Indian Farmers: Agri-Stacking the System By Colin Todhunter In April, the Indian government signed a Memorandum of Understanding (MoU) with Microsoft, allowing its local partner...
Read more