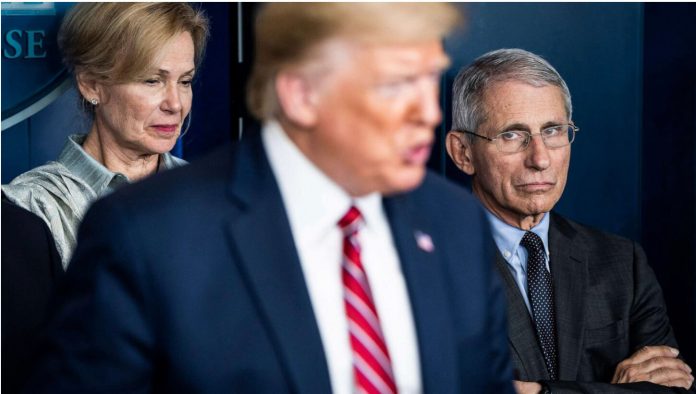 China, the World Health Organization and the U.S. National Institutes of Health have dimissed the theory that the virus causing the global pandemic that has killed more than 2 million people and devastated economies worldwide escaped from the Wuhan, China, lab funded by the United States.

But there’s no disputing the fact, as Newsweek reported in April 2020, that NIH executive Dr. Anthony Fauci promoted a highly controversial type of research involving the manipulation of viruses to explore their potential for infecting humans. And it’s known that more than 200 scientists pressured the Obama administration in 2014 to temporarily halt U.S. funding for that research because of the risk of a manipulated virus accidentally escaping a lab and igniting a pandemic. Nevertheless, under Fauci’s direction, the dangerous virus engineering resumed in 2017 and continued until April 2020.

Now, documentary evidence makes it a “near certainty” that the coronavirus pandemic originated in the Wuhan Institute of Virology in China, where so-called “gain-of-function” research was funded by Fauci’s National Institute of Allergy and Infectious Diseases, according to Steve Hilton, who is leading a special investigation for his Fox News show “The Next Revolution.”

Significantly, his investigation found a direct link between a bat coronavirus discovered a decade ago in a mine in Yunnan province and one that had been engineered in the Wuhan lab, 1,000 miles away.

Hilton noted on his show Sunday night that scientists at the Wuhan lab published a paper in February 2020 stating they had recently discovered a virus in Yunnan province that “showed high sequence identity” to COVID-19.

However, Hilton discovered after running the virus’s genome sequence through the NIH’s GenBank database that only one virus was an exact match to COVID-19. It wasn’t the virus discovered recently. It was the once discovered a decade ago in Yunnan province that killed miners who had stirred up bat faeces.

Hilton found it curious that the Wuhan researchers not only didn’t reveal that fact, they changed the name of the Yunnan virus, as indicated by GenBank.

As evidence that the Yunnan virus was manipulated in the Wuhan lab, Hilton pointed out that the two viruses are the same, except for two key elements: The COVID-19 virus is more infectious and can enter human cells in the respiratory system.

“Those are the exact places in the viral sequence where gain-of-function techniques would be applied, if … you were funded by the NAID to research bat coronaviruses to explore emergences or spillover potential,” he said.

“Spillover potential” refers to the ability of a virus to jump from animals to humans.

That exact gain-of-function research, he pointed out, was touted in a Nov. 30, 2017, progress report tied to an NAID grant. The crucial question is, Hilton said, was the virus at the center of that U.S.-funded work the one that was discovered in the mine a decade ago?

“The match between that virus and the work commissioned by NAID is so perfect, it’s impossible to believe they weren’t,” he said.

He noted that workers in the Wuhan lab were the first identified cases of COVID-19 in the fall of 2019.

The WHO and others are leaning on a “natural” explanation for the pandemic, Hilton noted. But if the COVID-19 pandemic originated naturally in the Yunnan mine – as the genome sequence indicates – but had nothing to do with research at the Wuhan lab, you would “have to believe in a laughably implausible set of coincidences.”

The bats in Yunnan province would have had to infect each other and another unknown animal or a human and then travel 1,000 miles – without infecting anyone else – until they got to Wuhan.

Before any mutations, he argued, the virus was 10 to 20 times more infectious than any previously observed virus occuring in nature.

“And most incredibly of all,” he continued, “the infected animal or human would have somehow chosen to make that 1,000-mile trek to the only place in all of China that had been working for years on the virus it was already infected with,” the Wuhan lab.

Significantly, the Chinese regime has blocked access to the Wuhan lab. Last week, NBC News reported a Wuhan Institute of Virology database with 20,000 entries was removed last spring due to “security reasons.”

But Hilton said the U.S. government also has not been forthcoming. After two weeks, the NIH finally responded last Friday to his request for comment on the coronavirus gain-of-function research project that began after the Obama administration’s halt in funding.

Calling the response “deceptive,” he wanted to know whether or not the director of NIH, the famed scientist France Collins, was aware of the statement.

The Chinese regime can certainly be blamed for a cover-up allowing the outbreak to become a global pandemic, Hilton said. But the reason the virus exists and is so contagious, he asserted, can be traced back to the decision of Collins and Fauci to go ahead with the gain-of-function research as a “risk worth taking” after the Obama administration stopped the funding.

“Of course Dr. Collins or Dr. Fauci didn’t create the pandemic on purpose. That is obviously ludicrous. They’ve dedicated their careers to fighting disease,” Hilton said.

“But there’s little doubt that one of their weapons of choice in that fight did lead to this pandemic.”

And they were warned that it could happen.

A Newsweek report in April 2020 confirmed that NAID funded scientists at the Wuhan Institute of Virology and other institutions for work on gain-of-function research on bat coronaviruses. In 2011, Fauci played an important role in promoting the work, arguing the research was worth the risk, because it could enable scientists to prepare treatments and vaccines in advance if a pandemic occurred, Newsweek said.

Fauci and two co-authors defended the work in the Washington Post in December 2011, arguing that “determining the molecular Achilles’ heel of these viruses can allow scientists to identify novel antiviral drug targets that could be used to prevent infection in those at risk or to better treat those who become infected.”

The work was halted by the Obama administration in 2014 under pressure from scientists but resumed in December 2017 when the NIH lifted the moratorium. Going forward, scientists had to get approval from a panel of experts who would determine whether or not the risks were justified.

The research was conducted in secret until, in early 2019, a reporter for Science magazine discovered the NIH had approved two gain-of-function projects, drawing rebuke from scientists in an editorial in the Washington Post.

“We have serious doubts about whether these experiments should be conducted at all,” wrote Tom Inglesby of Johns Hopkins University and Marc Lipsitch of Harvard. “[W]ith deliberations kept behind closed doors, none of us will have the opportunity to understand how the government arrived at these decisions or to judge the rigor and integrity of that process.”

In April 2020, a U.S. government report concluded the Wuhan lab was the “most likely” source of COVID-19, finding other explanations “highly unlikely.”

The report noted the activities of Shi Zhengli, a leader in bat coronavirus research at the Wuhan lab. A 2015 academic report in Nature Medicine by Shi and 14 other scientists said that while researching the potential for bat coronaviruses to infect humans, “we built a chimeric virus encoding a novel, zoonotic (animal-origin) spike protein … that was isolated from Chinese horseshoe bats.”

The U.S. government analysis, reported by the Washington Times, found virus-carrying animals had been “sold as pets, dead laboratory animals were not properly disposed of, and lab workers were known to boil and eat laboratory-used eggs.”

The report noted that China was clamping down on efforts to investigate whether the virus came from a lab, issuing a “gag order” and putting a military microbiologist in charge of the Wuhan lab.

Look at the look of pure hatred on the face of Fauci.