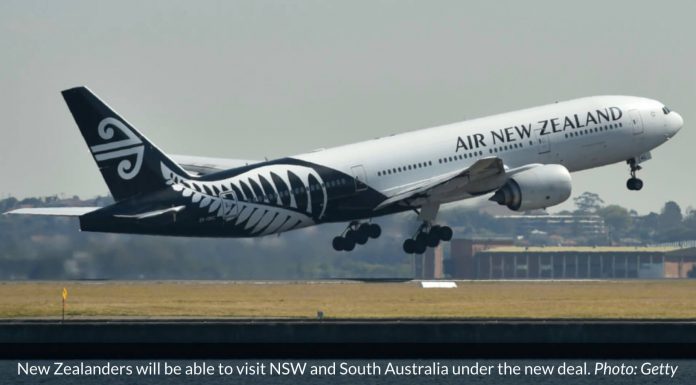 Nadda, Nein, Non, Nyet, No Way, Not a chance, Forget about it, Don’t even think about it, Never, Not now, Not ever. No means no. And, not only no, but fuck no!

It’s on: NZ-Australia travel bubble cleared for a one-way take-off

Australia has finalised a deal for a limited travel bubble between New Zealand and select Australian states, with flights expected to start arriving from across the Tasman within weeks.

Deputy PM Michael McCormack said New Zealanders would be able to fly to NSW and the Northern Territory from 12.01am on October 16.

There will be no requirements for visiting Kiwis to complete 14 days quarantine, but they will not be allowed to travel from any designated virus hotspots in that country.

“This is the first stage in what we hope to see as a trans-Tasman bubble between the two countries,” he said on Friday.

“I have just gotten off the phone with [NT] Chief Minister [Michael] Gunner, who says the fish are biting and the beers are cold and he wants to see as many of his New Zealand cousins and friends as possible.”

NSW and the NT were included in the bubble after accepting the federal government’s definition of a ‘hotspot’.

Under the definition, New Zealanders from places with more than three new cases in three days will be excluded from quarantine-free travel.

But the move signals intensified pressure on states to bow to the Commonwealth hotspot definition – which could also trigger more interstate borders reopening.

On Thursday, Mr Morrison had flagged travel beginning between NZ and NSW and South Australia, because they have also opened their borders to other Australians.

Mr McCormack said SA was not part of Friday’s announcement because it had not yet accepted the federal government’s definition of a hotspot.

Allowing quarantine-free travel from New Zealand will also free up more places in hotel quarantine for returning Australians. Mr McCormack said there would be 325 more places a week in Sydney alone.

“Safe travel of New Zealanders to Australia will enable space in the quarantine system to be freed up for Australians returning from other countries,” he said.

“If Queensland were to agree to this definition, around an additional 250 quarantine places could be freed up.”

But Australians hoping to cross the Tasman will have to wait a little longer, with the New Zealand government not yet satisfied with Australia’s infection rates.

New Zealand is pursuing a COVID-19 elimination strategy that requires criteria that must be met before its borders open to people from other nations, and will not yet reciprocate on quarantine-free travel for Australians.

Ms Ardern said on Friday that it was still too early to allow Australians to enter New Zealand.

“We have resisted that because we want to keep New Zealanders safe,” she said.

“We will not open the borders for quarantine-free travel with Australia until it is safe to do so, because doing it too early risks losing all of the freedoms that we already have in our economy. “

The move could also potentially allow Pacific islanders to spend two weeks in New Zealand before coming to Australia to work during this summer’s harvest.

“They can come and pick fruit, shear our sheep, fall in love,” Mr McCormack said.

Cannot wait for the election to be over. All this covid shit will suddenly go away. Cindy is a control freak who loves nothing more than having the stupid kiwis under her thumb. If she agrees to this at this stage, questions need to be asked why not sooner. Protecting the border was all they had to do. With the second lockdown of Auckland as a result of this failure, there is no way she will allow any Aussies into the country until after the election.

Previous articleHave Your Say
Next articleWhite supremacy is an idea.