You Stupid Boy
Home NZ Politics Cindy Will Be Pissed

Cindy Will Be Pissed 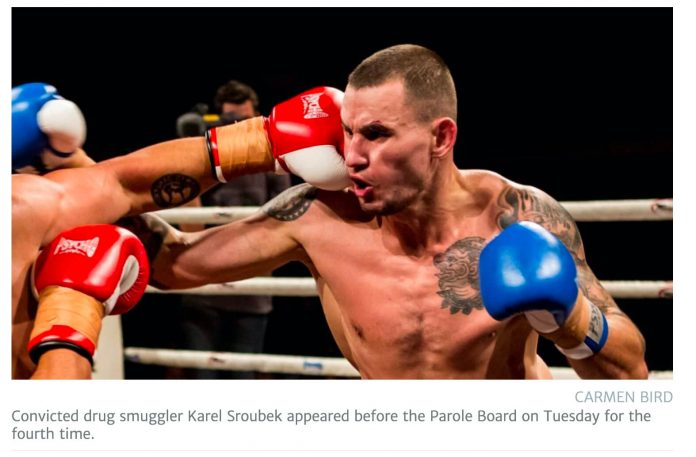 The Czech kickboxer and convicted drug smuggler Karel Sroubek has been declined parole.

Sroubek appeared before the board on Tuesday at Wiri prison in south Auckland for the fourth time.

Also known as Jan Antolik, he is serving a sentence of five years and nine months in prison for importing MDMA with a street value of $375,000.

Dressed in a maroon t-shirt and grey running shorts, Sroubek was accompanied by two supporters, his case officer and lawyer Paul Wicks QC.

Parole Board chairman Sir Ron Young told Sroubek that the board would see him again in November.

In the meantime, Sir Ron said he hoped Sroubek would employ a private psychologist for treatment inside prison.

Sroubek’s latest appearance marks his fourth time before the Parole Board.

In September 2019, the board determined Sroubek still posed an “undue risk” to the community, despite staff from the private prison operator Serco concluding him to be of low-risk of re-offending.

In its decision, the board said “we do not think it is low at all … We think it is significantly higher than low.”

Serco had “seriously underestimated” Sroubek’s risk to the community, the board said.

He had a “significant history of illegal activity in both the Czech Republic and New Zealand”, spanning years, the board said.

“Some of the offending is violent, some drugs and some dishonesty.”

The board also acknowledged Sroubek’s association with the Hells Angels in New Zealand and with criminals in the Czech Republic – factors it said increased his risk to the community.

Sroubek is currently the subject of a liability for deportation order but is appealing the decision to the Immigration Protection Tribunal.

Days after that appearance, Sroubek released a statement to the media, criticising the Board’s decision.

He said the parole system was contributing to the record high prison population and recidivism rates.

“Whatever you think of my particular situation you should be concerned that parole, when applied like this, is a system that judges and penalizes people twice and runs directly counter to the Kiwi sense of fair play.”

A sticking point for the board was that while Sroubek had a plan for employment and an address if he was released in New Zealand, he had no such plans if he was deported back to the Czech Republic.

Sroubek came to New Zealand in 2003 on a friend’s passport and was convicted of importing MDMA in 2016.

In 2018 Immigration Minister Iain Lees-Galloway confirmed to Stuff that he had given Sroubek New Zealand residency. The revelation sparked political controversy and eventually led to a review of Immigration New Zealand’s preparation of the file.

The Minister then reversed his decision. Lees-Galloway apologised to Prime Minister Jacinda Ardern but did not offer his resignation.

Sroubek was controversially granted residency in New Zealand despite the prison sentence and having gang affiliations.

Immigration Minister Iain Lees-Galloway was criticised for his initial decision to grant residency, and eventually issued a new deportation liability notice. That meant once Sroubek finished his drug-smuggling sentence he would be ordered out of the country.

Immigration NZ also underwent an independent review into its processes.

In todays environment of releasing the bad buggers back into the community, to be denied parole for a fourth time is most unusual. One wonders why Angry has been overruled in this. Is there more to this than what we are told?

Previous articleWho Can You Trust These Days?
Next articleHave Your Say