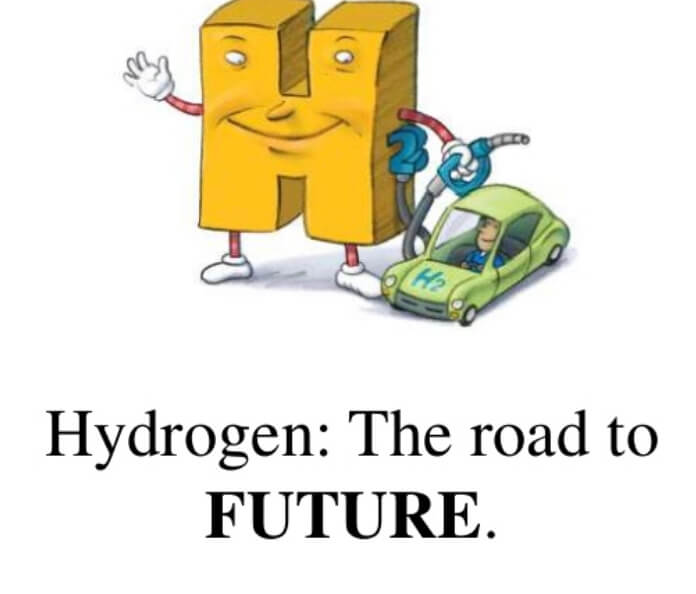 In 2020, Europe swung behind hydrogen as a pillar of its strategy to reach net zero emissions. Now in 2021 the focus of industry, investors & policy makers is how hydrogen deployment will work in practice.

Why is hydrogen so important?  It facilitates the decarbonisation of key areas of the industrial, heat and transport sectors that are difficult or expensive to electrify. It also provides important power sector flexibility to support high levels of renewables penetration.

The key challenge for 2021 is defining policy support and business models that will drive rapid investment in hydrogen supply chains.  Hydrogen needs to scale much faster than renewables have over the last decade, to kick start decarbonisation beyond the power sector.

In today’s article we look at 5 factors that are set to drive hydrogen investment, supply chain value and impact on existing energy portfolios.

The European Commission and the UK government realise the importance of the rapid scaling of hydrogen across a variety of production technologies.  Headline policy announcements have so far targeted green hydrogen produced from renewable electricity. The long term vision for green hydrogen is compelling: electrolysers will soak up surplus renewable energy and convert it into a high value flexible fuel, to facilitate deep decarbonisation.

However targeting electrolysers alone will result in a slower pace and scale of hydrogen deployment, given significant renewable & network infrastructure constraints. Incremental demand driven by the EU + UK electrolyser targets announced to date (~45GW) is set to increase European power demand by around 5% by 2030 (similar to the impact of EVs). Yet the volume of green hydrogen produced by meeting these 2030 targets, falls well short of what is required to progress decarbonisation of ‘hard to electrify’ areas of the industry, heat & heavy transport sectors towards 2050 targets.

A broader and more pragmatic focus is emerging this year in recognition of these constraints. The EU is swinging behind a role for blue hydrogen produced from natural gas, as a transition technology.  The UK is particularly interested in blue hydrogen given its existing natural gas infrastructure and access to storage in the form of depleted field reservoirs and salt caverns.

The EU’s climate commissioner Frans Timmerman has been increasingly public in his support for scaling hydrogen via fostering competition across multiple production sources. This was reinforced in a motion adopted last week in the European Parliament’s climate committee in support of the role of the transition role of blue hydrogen alongside green.

This is an important sign that European leaders are pragmatic about scaling hydrogen and doing it fast. Let’s consider 5 factors that will shape how this may happen in practice.

1.Hydrogen is an expensive fuel

There are three main hydrogen production methods currently in play:

We focus on green & blue hydrogen in this article given these are the technologies likely to dominate the scaling of hydrogen over the next 10-15 years. Turquoise hydrogen (via pyrolysis) could play an important role in the longer term, but is currently at an earlier stage of evolution. Chart 1 summarises production costs for green and blue hydrogen relative to current costs for natural gas and grey (unabated) hydrogen. 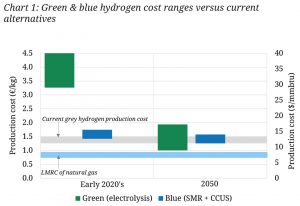 Blending of hydrogen in existing high pressure natural gas networks is possible up to at least 20% by volume (around 7% by energy).  Blending does not target high value end use, but it does support the broader scaling of hydrogen production to displace natural gas over time.

Production cost structure will shape the deployment and utilisation of hydrogen as a fuel. Yet green & blue hydrogen have very different supply chain structures, as summarised in Chart 2. 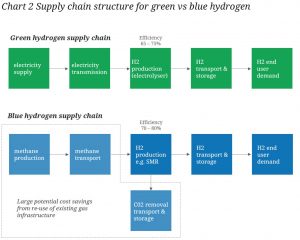 The green hydrogen supply chain is characterised as follows:

In the long run e.g. 2040+, incremental investment in hydrogen production capacity is likely to be dominated by green hydrogen. In fact the deployment of electrolysers will likely be a key means of facilitating very high penetration of wind & solar, by helping to balance huge swings in generation.

But across the next 20 years there are practical limits as to how fast electrolysers can be scaled.  These are driven by constraints relating to the pace of renewables build, network congestion and availability of low cost power.  This paves the way for green and blue hydrogen to compete & co-exist.

We are used to price responsive power & gas markets that dynamically balance independent sources of supply & demand.  Hydrogen may evolve into a more liquid market over time, but for at least the next 10 years, end user requirements will play a key role in shaping hydrogen deployment and supply chains.

Many of the ‘foundation customers’ for low carbon hydrogen are likely to be industrial sites e.g. steel & chemical producers. The requirements of end users will be important in shaping the evolution of hydrogen. For example:

As was the case in the early stages of gas and LNG market evolution, hydrogen offtake contracts will play a key role in defining the price & volume structure and risk sharing relationships between producers and consumers.

Local hydrogen markets are likely to develop much more quickly than cross border markets. Industrial & power generation clusters require only 2 or 3 hydrogen end users to spawn transactions in a local market e.g. resale of surplus volumes or purchase of incremental volumes. There may also be instances where owners of otherwise potentially stranded gas assets can bring existing infrastructure to the party (pipes, storage, compression) at costs much lower than new build.

A liquid pan-European market is many years away, but it if it comes, growth will likely be driven organically from expanding local markets.

4.Hydrogen is cheaper to store than power

The ability to store energy across periods of low wind & solar output is one of the key challenges of decarbonisation.  Storage of power is expensive, particularly over longer durations (e.g 8 hrs +). Hydrogen production may be expensive, but its storage is relatively cheap.  This will be an important factor shaping hydrogen supply chains & utilisation.

Electrolysers can also provide key flexibility services to power networks to compliment electricity storage e.g. balancing/ancillary services.  Revenues from these services are set to form an important part of the investment case for green hydrogen projects.

The EU and national governments have learnt some key lessons from renewables deployment that will shape their approach to hydrogen. These lessons are likely to support a much faster evolution of hydrogen support mechanisms. Evidence to date points to competitive bidding to access some form of revenue stabilisation & support mechanism e.g. CfD based.

Renewable support mechanisms have the benefit of being linked to a transparent and liquid power price.  This not yet possible for hydrogen, which means an alternative reference is required e.g. related to some transparent measure of hydrogen revenue or level of carbon abated.

Although policies are set to support competition across different production sources, there are likely to be policy mechanisms that act to close the cost gap between green & blue hydrogen. For example:

The details of national support mechanisms that are set to emerge over 2021-22 will be a key catalyst for scaling investment in hydrogen infrastructure.

What are these views based on?

The 5 factors we set out above are based on Timera’s client work on hydrogen across the last 2 years.  It is interesting how broadly and quickly industry interest in hydrogen gas grown.

The problems we are working on with clients illustrate a cross section of industry focus areas. For example:

It is difficult to overstate the pace at which momentum is building behind hydrogen investment, given clean hydrogen existed largely in the realms of science fiction only 2 years ago.

Previous articleHave Your Say
Next articleBring Back Kayleigh McEnany