Climate lunatics vs. the laws of physics: 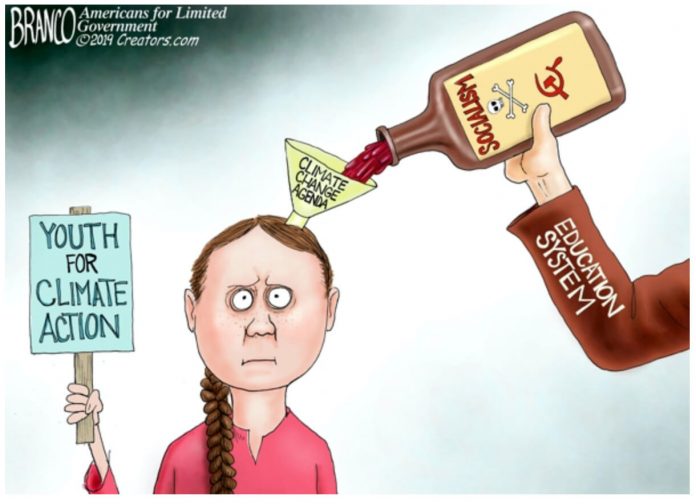 A dozen climate protesters nearly run over by a train they tried to stop by standing on the tracks… because momentum is a real thing, unlike climate change

When she’s not busy calling for mass executions of uncooperative politicians, climate child Greta Thunberg is inspiring her deranged cult members to disrupt commerce as a way to “save the planet.”

According to reports, a cohort of Greta worshipers in the Northeast has been throwing their bodies in front of coal-filled freight trains for at least the past month in the hopes of stopping these fossil fuel payloads from reaching their destinations.

Video footage of an incident in Worcester, Massachusetts, as one example among many, shows a handful of rabid climate activists almost getting run over by one of these freight trains while it was en route to New Hampshire. Similar incidents have occurred at various other points along the same track.

An activist group known as “350 New Hampshire Action” reportedly took ownership of at least one of these dangerous stunts, announcing that nobody was hurt but that the trains “refused to stop” – as if they somehow should have turned right back around and gone back to the coal mine.

But momentum is a real thing, unlike climate change.

And the Darwin award for 2019 goes to: Greta Thunberg’s brain-dead climate army

Reports about the most recent train incident in Worcester reveal that climate activists were darting across the tracks with flashlights – flashlights that were presumably powered with fossil fuel-derived electricity – in the expectation that the train would somehow stop on a dime for them.

Little do these idiots realize that it takes a moving freight train about a mile to a mile-and-a-half of distance to come to a full and complete stop, even after the emergency brakes are applied. In other words, jumping in front of a moving train while hoping that it’s going to stop for you is absolute idiocy.

But what else would you expect from the climate crowd, which gets its “education” from George Soros-backed climate children who have no idea what they’re talking about beyond what their scripts tell them to say? You might even call this phenomenon climate retardation, where mentally ill group-thinkers gather together to broadcast their ignorance by engaging in ridiculous climate stunts.

Earlier this month, another climate group known as the “Climate Disobedience Center” engaged in a much broader effort to stop the transfer of coal via freight train because, according to the group, the average coal power plant “pollutes the river and causes asthma and contributed to climate change.”

The Climate Disobedience Center, whose members all appear to be entitled white leftists, reportedly blocked a freight train that was heading to Bow, New Hampshire, all while taking photos of themselves for social media.

“It is crucial that the actions that we take not be one-off actions,” stated a spokesperson from 350 New Hampshire about the purpose of these stunts. This spokesperson went on to state that such protests will “continue until the power plant is taken offline once and for all,” referring to the Merrimack Station power plant in Bow.

The reason why we’re linking these groups and their actions to the rhetoric of Greta Thunberg is that the leaders and founders of 350 New Hampshire have publicly admitted that they received their inspiration from the Swedish Antifa member, whose own climate rhetoric is becoming increasingly more violent.

“The climate apocalypse is coming,” reads a propaganda piece in The New Yorker that sounds as if it was written by Greta or some member of 350 New Hampshire.

“If you’re under thirty, you’re all but guaranteed to witness it … you can accept that disaster is coming, and begin to rethink what it means …”

To build back better, we must reinvent capitalism. Here's how: Peter Bakker The pandemic has brought into focus many of the vulnerabilities in our systems...
Read more
Climate Change Bullshit

Finally we get the truth.

THE VIRUS IS THE MURDER-WEAPON TO KILL CAPITALISM. Now we know the end-goal for Corona being unleashed: Global reset, World without Borders, One World Governance. The...
Read more

Trump Pushing to Revive Firing Squads and Electrocution as Feds Ramp Up Executions By Elias Marat: While the final 50 days of a president’s tenure are...
Read more