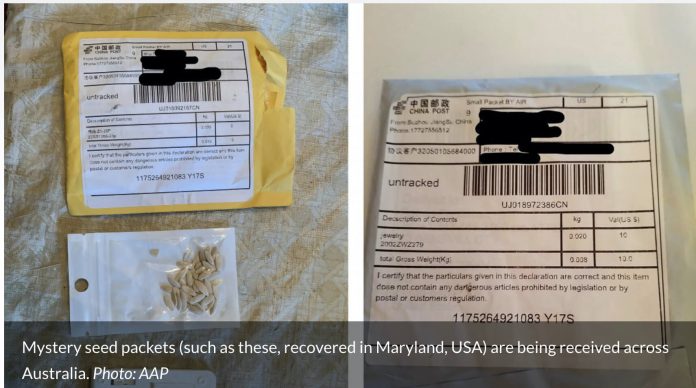 Solved: The reason why foreign ‘mystery seeds’ are being mailed to Australian homes.

Australian officials believe they have unravelled the mystery of dozens of unsolicited packets of seeds being randomly mailed to addresses around the country, as the number of the cases grows.

It’s thought the bizarre ‘mystery seed’ reports may be linked to an online e-commerce scam.

The New Daily reported on the ‘mystery seed’ trend earlier this month, after the Department of Agriculture, Water and the Environment revealed multiple reports of seed packages being received in the post.

Australian recipients of the packets had not ordered or requested them, with the perplexing mail – sent from countries including China, Malaysia and Taiwan – destined for addresses in Queensland, Victoria, South Australia and Western Australia. 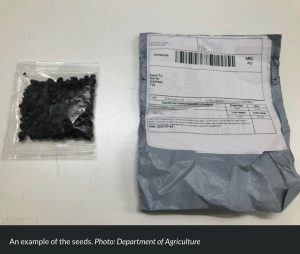 On Wednesday, the department revealed the puzzling trend had grown in recent weeks, with dozens more reports received and the list of origin countries growing.

“The department has received 46 confirmed reports of unsolicited seeds arriving in Australia over the past five weeks,” a department spokesperson told The New Daily.

Queensland and NSW recorded the highest number of reported cases of mystery seeds, with 15 each.

Another seven were reported in Victoria, with several more apiece in Western Australia, the Australian Capital Territory, South Australia and Tasmania.

“The seed packets were predominantly sent in mail arriving from China, Malaysia, Taiwan, Uzbekistan and Pakistan,” the department said.

“All packets of seeds were unidentifiable, however, investigations and identification of the seeds are ongoing.”

The department did not initially reveal any hint of why the seeds may have been sent. However, this week, it shed some light on the possible reason for the mystery seed trend – linking it to a common online scam.

“Seeds are often sent in the mail as a result of an e-commerce practice called ‘brushing’, the spokesperson said.

“Brushing is used by a vendor to bolster their store’s orders and ratings, to increase their visibility online.

“Seeds are often used because they are light and cheap to send through the mail.”

The seed trend, which also was earlier noticed in the United States and Canada, had been linked to such e-commerce scams by authorities in those countries.

Australian officials have urged anyone who receives such unsolicited seeds to report them to the department and to not plant or use the seeds under any circumstances. It’s feared unknown seeds could carry viruses which can devastate Australian crops and plants.

“Seeds that do not meet Australia’s biosecurity import conditions can pose a significant threat. They could be an exotic, noxious or invasive species, or be carrying harmful plant pathogens,” the department said.

“If you do receive seeds in the mail that you did not purchase, do not plant the seeds, or put them in the garbage. Secure the seeds and immediately report it to the department.”

Previous articleHave Your Say
Next articleWaterton is on to it!