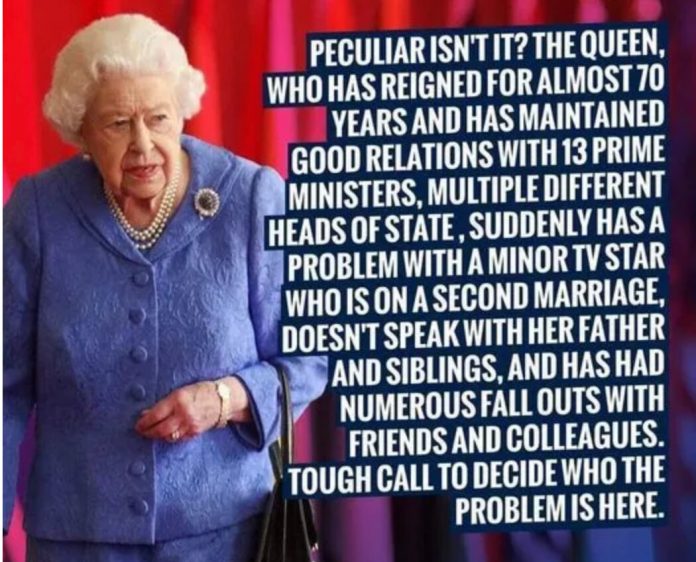 Meghan & I: In another life, we’d be besties.

Meghan Markle is a vicious, conniving, hypocritical, manipulative, unlikable witch. In another life, we’d be the best of friends! But she’s just not royal material. And it has nothing to do with the colour of her skin. It’s because she’s a tarantula, a succubus, the living embodiment of the phrase, ‘It cries out in pain as it strikes you’.

As she basically admitted to Oprah, Markle thought that by marrying into the British royal family, she’d become a celebrity on steroids. Marrying Harry, she assumed, would be a passport to a life of unimaginable privilege in which she could bask in adoration, never more than 24 hours from the next custom Givenchy outfit.

But it didn’t pan out, because the Duchess of Sussex forgot the flip-side of all that pomp and circumstance: You only get to enjoy it as part of a lifetime of public service, dedicated to the little people.

Markle must have been horrified at her first public engagement. After all, the sort of people who show up for royal events are exactly the gauche, unsophisticated working-class right-wingers whom Markle abhors, associating them with Trump voters — and with her own trailer-park origins, an early life the Duchess has tried desperately to forget.

The British royal family is the hardest-working institution in the world, dedicated to the idea of noblesse oblige — or, to put it another way, ‘to whom much is given, much is expected’. It must bore the knickers off Her Majesty to snip ribbons outside hospitals and attend endless awful charity events, but she does it without complaint, and has done for decades.

That’s why we like her. And that’s why we don’t like Meghan, whose snooty, nasty and cruel treatment of staff was apparently legendary in Hollywood. …

Even Michelle Obama, normally the most racially tribal of political figures, broke ranks this week to wag a finger at Meghan for classlessly crapping on the Windsors, in a statement that pointedly reminded Markle that family comes ‘first and foremost’. Like the rest of us, the former First Lady is amazed at how many bridges Markle has burned with both her own family and her adoptive one. …

Is it appropriate to blame Harry for not reining in his wife’s excesses? He’s the man of the house, after all. The darkest corners of the internet, where I like to hang out, are overflowing with memes and jokes about how hopelessly under the cosh he is.

I dunno. Perhaps it’s cruel to expect any woman in public life to exercise agency in 2021. After all, women are such victims, aren’t they? If I’m reading contemporary feminism correctly, the poor dears can’t take living in reality with the rest of us.

Women desperately need special treatment, lowered standards in the military, tiptoeing around on television so their delicate feelings aren’t trampled on, and reassuring lies about ‘wage gaps’ and ‘sexist air-conditioning’.

And I do agree on the whole that women go where men lead, and that half the problem with modern culture is that men have forgotten how to say ‘No’ to overwrought cat ladies. …

But just as I muster up fury at Harry, I come across a photo montage on the internet showing how Meghan has scrupulously imitated half a dozen of the late Princess Diana’s most iconic outfits, and it makes me shudder.

This strikes me as sinister and creepy, channeling Harry’s dead mother to hypnotise and bamboozle the poor git into nodding along with her ludicrously transparent and self-serving machinations. Meghan poisons everything she touches, draining the life and joy out of all who cross her path.