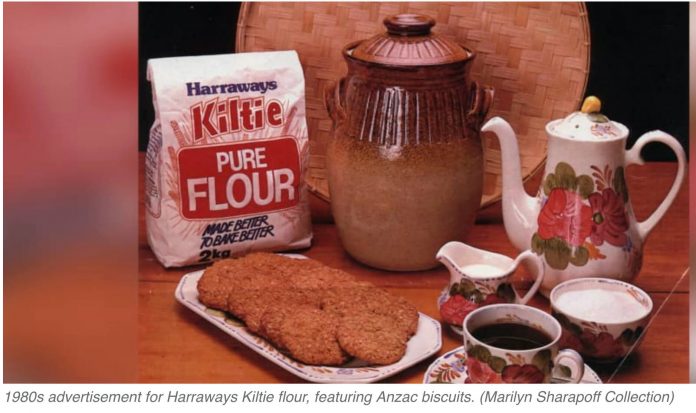 If there’s anyone thriving in these locked-down times it’s the makers of baking goods. With Anzac Day – and the excuse to make the great Anzac biscuit – nearly upon us, Rebecca Reid looks at a homegrown company that has been providing comfort to generations of Kiwis.

Since the Covid-19 lockdown was announced four weeks ago, flour and oats have flown off the nation’s grocery shelves. For many, not always being able to get their hands on the baking staples has been verging on traumatic.

But for New Zealand’s only oat mill, Harraways, it’s been a boom time. Retail oat sales are up by 113 percent compared with March last year, and the mill is running 24 hours a day, pausing only for maintenance.

With its oat range in hot demand, Harraway and Sons oat mill in Green Island near Dunedin is making the most of being deemed an essential service. Marketing manager Peter Cox says the retail market for the oats business is “on fire” and they expect demand to remain steady as the focus has turned to the home kitchen and the pressure on baking staples has shot dramatically up the scales.

Milling flour and making bread – “the staff of life” – is a tradition that reaches back to well before the start of Christianity. In the young colony of New Zealand, growing wheat started early, too, with both Māori and Europeans involved.

Flour mills spread through the country, following population growth and industry, including the southern gold rushes of the 1860s. In rural areas, flour and oat mills were as important to the community as today’s corner store.

It was this developing industry that Henry Harraway discovered when he arrived in New Zealand from Australia in the 1860s, having already been in Australia on a quest for gold. With a flour-milling background he worked in a number of Otago flour mills before moving his growing family (eventually 21 children, of whom 18 survived) to Green Island to take over what became the Harraways Mill.

The flour, oatmeal and barley mill had begun in 1867, and went on to survive the Great Depression, two world wars and the 1918 influenza pandemic, to eventually become the largest oat mill in New Zealand, recently celebrating 150 years in business.

Early on, the company marketed oats as the wholegrain ‘king of foods’ due to their nutritional value, but really the secret of its success is a lot to do with taste. Oats and flour are the basic ingredients of comfort food, and have been for countless generations, through world wars, recessions and now pandemics. Having a ready supply of nutritious grains provides security and familiarity during uncertain times.

And the human instinct to hoard for the leaner times was particularly evident early on in the lockdown, when the supermarket baking goods aisles were largely corridors of empty shelves.

If there has been a silver lining to the Covid cloud, then, it’s our newfound passion for baking. We’ve gone from a nation of takeaway lovers to a country of obsessive bakers, forced back to the kitchen in a national bake-off of reality show proportions. Bread, scones, cakes, biscuits, pancakes, oat cakes, porridge, muesli – all heart-warming foods and all filling the pantries, tummies and Instagram feeds of Kiwis.

The industry is well used to reacting to market seasonality spikes, particularly in winter when our desire for porridge in colder climes kicks in. For most of us, currently being home-based, eating oats in breakfast cereals and/or in baking will help us at least maintain one healthy habit.

And of course, there is Anzac Day coming up – although without the usual parades and social gatherings at the local RSA. One thing we can do, however, is bake some Anzac biscuits – a tradition going back to WWI when women’s groups in New Zealand and Australia baked oaty morsels that would keep well during transportation to the soldiers overseas.

If you really want to go for authenticity, this is the earliest Anzac biscuit recipe currently known in New Zealand.

Put dry ingredients into basin, add melted butter with treacle and hot water; mix all together; bake in small pieces, flattened out, in moderate oven.

And if you simply want the scrumptious modern variation (and you can find the ingredients), here is the Harraways Anzac biscuit recipe.

Instead of stuffing around forming it into balls and flattening it, she puts it in a brownie pan and cuts into squares once  cooked.

She says it’s so easy, even moi could make it when I retire.

Retirement is not in my immediate future. This lock down has shown how boring it would be without something worthwhile to do.

Previous articleSix Days in Hubei
Next articleTime To Tell The Truth, Cindy Are You Listening!!!!!

Physics offers explanation to why time flies as we get older by John Anderer DURHAM, N.C. — For many of us, when we think back to childhood...
Read more
Lifestyle