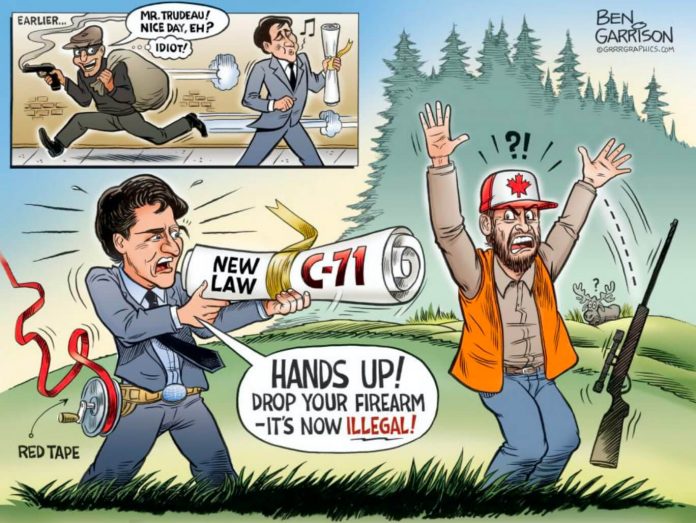 Canadian Prime Minister Justin Trudeau’s ban on commonly-owned firearms hasn’t been received well in many parts of the country. The province of Saskatchewan announced on Wednesday that it will hire its own chief firearms officer in a rebuke to Trudeau, and the first lawsuit over the prime minister’s executive action has now been filed as well. The Canadian Coalition for Firearm Rights argues in a new federal lawsuit that Trudeau’s Order in Council to ban thousands of makes and models of commonly owned firearms is unlawful, is asking Canada’s judicial system to strike down the order.

Following the Order in Council, the RCMP began making amendments to the Firearms Reference Table (“FRT”), changing the classification of hundreds of firearms to “prohibited”, thereby unilaterally writing law and creating criminals out of law-abiding Canadians. Accordingly, the CCFR is asking the Court to declare that these purported “bans by FRT” are of no force or effect, both for similar reasons as applied to the regulation above, as well as the fact that the RCMP simply have no legal power to unilaterally make laws reclassifying firearms in Canada and creating criminals out of Canadians. This is especially troubling given that the RCMP aren’t even notifying the affected Canadians about these unilateral reclassifications.

Not only did Trudeau bypass Parliament by using an Order in Council to pursue his gun ban, he left it up to the Royal Canadian Mounted Police to actually determine which firearms should be banned. That way he can claim that he’s just leaving it up to the “experts” to decide what firearms Canadians should be allowed to own.

Because the firearms affected by the regulation and the “bans by FRT” are in fact reasonable for use in Canada for hunting and sporting purposes, the CCFR is asking the Court for a declaration of that, and also for a consequential declaration that all of these firearms are to be deemed to be classified as non-restricted for all purposes, and therefore may be enjoyed by Canadians for both hunting and sporting purposes.

In order to protect the interests of Canadians from irreparable harm in the interim, the CCFR is also asking the Court to grant an injunction staying the effect of both the regulation and the “ban by FRT”, until these matters can be properly adjudicated.

I won’t even pretend to be an expert in Canadian law, so I have no idea what the prospects of success might be for the new lawsuit, but I’m glad to see that gun owners are taking the Trudeau administration to court even as many provinces struggle to figure out ways to push back against the new ban. In Saskatchewan, officials are hoping that a new chief firearms officer may be able to better “articulate Saskatchewan’s concerns to the federal government,” according to Christine Tell, the province’s Minister of Corrections and Policing.

The Saskatchewan government has openly opposed the ban on “previously legal firearms,” saying it’s unfair to “law-abiding” gun owners. The province added it was not consulted on the ban and that it would rather criminals be targeted in the effort to stem gun violence. 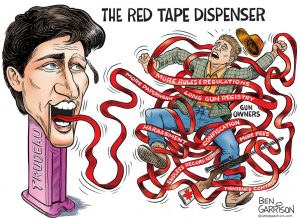 “Saskatchewan’s opposition to changes made to federal firearms legislation will continue,” Tell’s ministry said in an emailed statement Tuesday that went on to mention the move toward the new provincial CFO.

Trudeau still hasn’t explained how Canada’s compensated confiscation program is supposed to work, and given that it comes with a price tag, it’s highly unlikely that he’ll be able to avoid a vote in Parliament forever. Critics have accused the prime minister of exploiting the recent active assailant attack in Nova Scotia as a pretext for the ban, and Trudeau has resisted calls for a federal investigation into the attack, including why the RCMP used social media instead of an automated alert system to inform residents of the attack, which lasted for about twelve hours. Some victims and their families also want to know why the suspect in the attack never faced any real consequences for a series of domestic violence incidents stretching back for several years before the attack took place.

Sadly, Trudeau seems far more interested in taking guns from law-abiding Canadians than delivering answers to the families of those killed in the Nova Scotia attack. Canada’s court system probably can’t compel Trudeau to launch and investigation, but it does have the power to put a stop to his unconscionable gun grab.

Previous articleEnemies Of The People
Next articleShit always rises to the top.