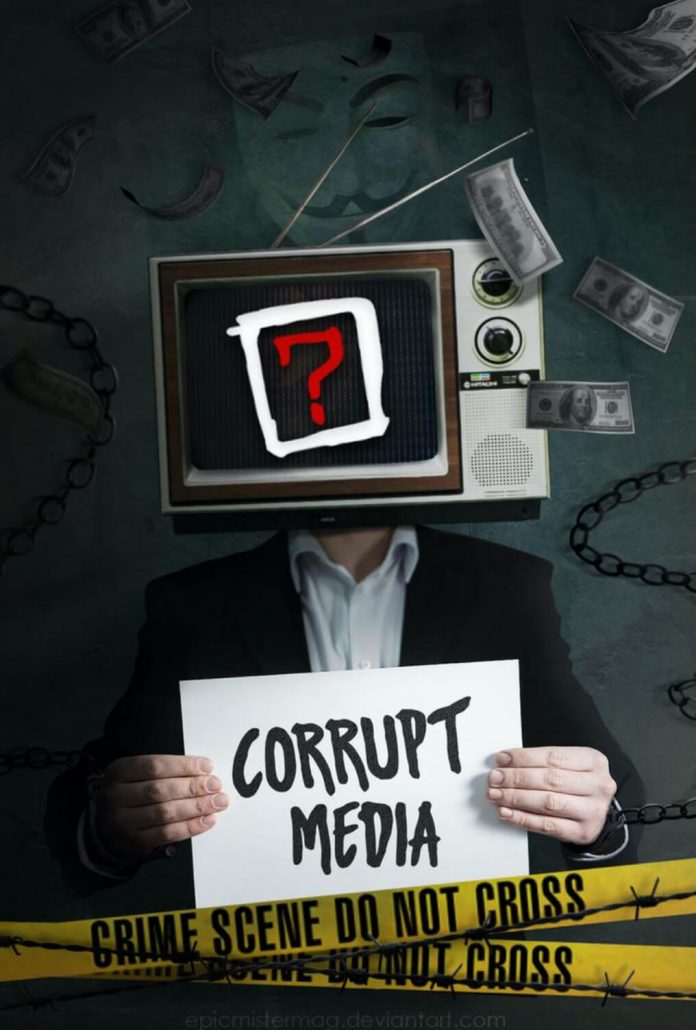 “My biggest opponent isn’t Biden. It’s not the Democrats. It’s the corrupt media,” Trump told Fox News’ “Fox & Friends” in a phone interview yesterday. “We have a corrupt media in this country.”

It’s one truth that should be self-evident to every American, but President Donald Trump still nailed it Monday morning.

President Donald Trump won’t be taking on Joe Biden, Kamala Harris and the increasingly leftist Democrat Party in the November election, he will be taking on the entire corrupt media.

It’s the massive, dishonest establishment media that has spent four years plotting to make voters reconsider the rebellion of 2016, when millions of Americans decided to put a stop to the country’s seemingly relentless drift to the hopeless socialism of the “hope and change” Obama years.

Every Republican president is fighting an uphill battle against the mainstream media, of course. They hated Richard Nixon, they loathed and feared Ronald Reagan, they despised Bush 43 and they abhorred Bush 45. But the ferocity of the media war against Trump is beyond all that — and everyone on every side of politics knows it.

A new analysis published Monday by the conservative Media Research Center proves Trump’s point – and makes it clear just how far the establishment media have gone in their propaganda war against the White House the American people elected four years ago.

Published at 8:15 EDT, it went out at virtually the same time Trump was being interviewed.

“I’ve been studying the news media and elections for more than 35 years,” wrote Richard Noyes, MRC’s research director. “Trust me — there’s never been anything like it.”

According to Noyes, MRC studied ABC, CBS and NBC evening newscasts from June 1 through July 31 — two full months, including weekends.

The study found 512 total minutes of coverage devoted to Trump specifically, not counting coverage of the administration or its policies generally, Noyes wrote. That compared with 58 minutes devoted to Biden — a ratio of almost 9-1.

“The extra airtime devoted to Trump consisted almost entirely of anchors and reporters criticizing the President,” Noyes wrote. “During these two months, our analysts documented 668 evaluative statements about the President, 95 percent of which (634) were negative, vs. a mere five percent (34) that were positive. Using the same methodology … we found very few evaluative statements about Joe Biden — just a dozen, two-thirds of which (67%) were positive.

“Do the math, and viewers heard 150 TIMES more negative comments about Trump than Biden. That’s not news reporting — that’s a negative advertising campaign in action.”

It’s actually worse than a “negative advertising campaign.” It’s a propaganda war directed personally at the president of the United States and – by extension – the 63 million voters in the 50 states who decided he was the man to lead the country over the clearly corrupt Hillary Clinton.

This doesn’t even count the Leni Riefenstahls at CNN and MSNBC. It doesn’t include the endless column inches of anti-Trump vituperation printed in papers such as The New York Times over that same period.

Taking all that into account, it’s clear that no one who pretends to have even a shred of intellectual honesty can disagree with Trump’s point.

By himself, the doddering Joe Biden can’t excite his own basement. On its own, the increasingly leftist Democratic Party wouldn’t draw much approval from anyone who wasn’t still being declared a “dependent” on a parent’s tax return.

But with the massive power of the American “news” media, with the blaring megaphone of celebrities in the entertainment world, Biden is actually being considered capable of taking on one of the most demanding jobs in the world. (For Biden, that probably describes putting on his own shoes these days.)

“No presidential candidate — not even Barack Obama in 2008 — has ever been on the receiving end of such a wide array of media favors. (While Obama received highly positive coverage, there was no massive media effort to destroy his GOP opponent, Senator John McCain.),” Noyes wrote.

“While the former Vice President sits snugly in his basement before his nomination later this week, the entire liberal ‘news’ media complex have spent the summer on the attack against his opponent, even as they refuse to report anything negative about Biden himself.”

It’s true there might be self-serving explanations for it. Reporters, editors and executives in the mainstream media might even have convinced themselves that Trump is a danger to the republic and therefore the rules of journalism no longer apply (as New York Times media commentator Jim Rutenberg declared even before the 2016 election).

Regardless, there is literally no way to deny the essence of the president’s charge.

For Trump supporters, then, there’s more than just a sign of optimism in headlines about a poll released Sunday — by CNN, of all places – that showed the president and Biden in a statistical tie nationally, with Biden at 50 percent and Trump at 46 (the poll had a margin of error of 4 percent.)

In states considered “battlegrounds,” the poll found Biden leading by a mere 1 percent – 49-48.

Given what the country witnessed about polls and Trump’s victory in 2016, it’s a virtual certainty that his support against Biden is stronger than those numbers indicate — even in the face of a media blitzkrieg.

That’s a sign that voters are looking past the propaganda — or seeing straight through it.

That’s the one factor the media can’t control — and it’s the only one that matters.

Read through this and replace USA with NZ and Trump with Judith Collins or David Seymour, and the story will be the same. Why do lefties always try to be so underhand.

Biometrics Data Collection is All Around You The worldwide digital panopticon isn’t coming – it’s already here.  While China has the most surveillance cameras in...
Read more