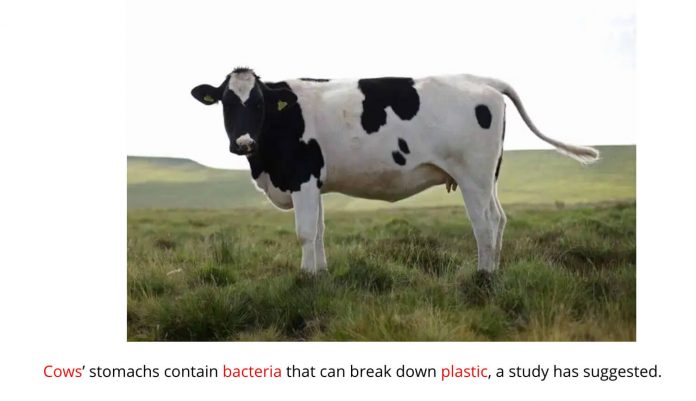 With the use of single-use plastics creating an ever-growing pollution problem, scientists are searching for ways to degrade the material, with research in recent years considering microorganisms, including bacteria and fungi, as a biological means of recycling plastic in an environmentally friendly way.

Researchers at the University of Natural Resources and Life Sciences in Vienna hypothesized that some of the microbes in the cow’s rumen, the largest compartment of a cow’s stomach, should be able to degrade polyesters, due to their diets. Cows consume a natural polyester produced by plants, called cutin, which can be found in peels of tomatoes and apples, Dr Doris Ribitsch, a senior scientist on the research team told Live Science.

The researchers examined the effect of liquid from the rumen on three types of polyesters by incubating each plastic for three days. It was tested on PET (a synthetic polymer often used in food packaging); PBAT (biodegradable plastic commonly used in compostable plastic bags); and PEF (a material derived from plant or vegetable sources). Each type was tested in both film and powder form.

The study, published in the journal Frontiers in Bioengineering and Biotechnology, found that all three plastics could be degraded by the microorganisms found in the rumen, although they broke down PEF best. The plastic powders broke down quicker than plastic film.

The team analysed DNA from the liquid to identify which microbes were behind the degradation, finding that 98 percent were bacteria.

The research could in turn allow scientists to identify the bacteria driving the material’s degradation and the enzymes they produce. They could then be genetically engineered and used in the recycling process.

Dr Ribitsch said the research team was also trying to find microbes that can consume more stubborn plastics such as polyethylene – and wonders if they could also possibly be found in the stomachs of cows. “Maybe we can find, in such huge communities, like in the rumen liquid, enzymes that can also degrade polypropylene and polyethylene,” she told Live Science.

At present, most of the UK’s plastic waste is burned or dumped, often after being shipped out to other countries. A Greenpeace investigation earlier this year found plastic bags and packaging from UK retailers and supermarkets dumped at sites across southern Turkey, leading the organisation to condemn British firms for dumping their waste abroad.

How Ultra-Processed Food May Affect Your Brain Written by BBC The way ultra-processed foods may affect the brain has caused concern among some health experts. They...
Read more
Science