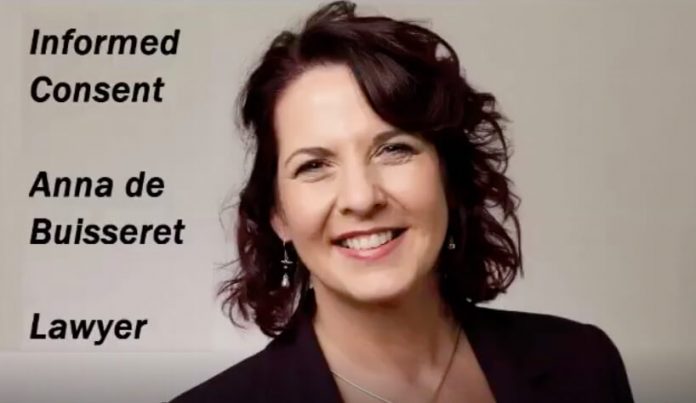 Anna de Buisseret is a senior UK lawyer and a retired Army Officer with nuclear, biological warfare training. “That’s why I’m standing up and speaking out. I’m upholding my Oath to We the People to ‘Protect and Serve’,” she says. She has previously also worked as a management consultant at Pfizer.

For the past year she’s been working with a team of lawyers, both in the UK and internationally, to drill down into the evidence and the legal analysis of the Covid-19 pandemic.  They are also working with various campaign groups including: HART; Covid19Assembly; World Doctors Alliance; UK Freedom Alliance; and, Us for Them.

During an interview with Tony Gosling de Buisseret explained what led her to believe Covid-19 was biowarfare. Because of her previous nuclear, biological and chemical weapons training and knowing that bioweapons had been in the making for a long time, she was “on high alert for bioweapons being released”. In March/April 2020 she contacted an ex-army friend in China to discuss “the evidence, what was going on and comparing notes about what he was being told over in Beijing compared to what we were being told over in the UK.”  For example, pictures at the start of the ‘pandemic’ of people falling dead in the streets in China – her contacts in China said, “it’s all nonsense”.  De Buisseret had also heard Francis Boyle speaking out very early on saying, “this is a bioweapon, this is biowarfare”.

“We took enough witness evidence and looked at enough of the evidence – and as you know, with lawyers it has to become beyond a reasonable doubt if you’re going to allege criminal activity – and it got to a point where, unfortunately, we reached the conclusion that it was beyond a reasonable doubt,” de Buisseret said.  After reviewing the definitions of genocide, crimes against humanity and biowarfare compared with what was going on, it was irrefutable. In April 2021 they made an urgent application to the International Criminal Court requesting an investigation of the UK government.

During the interview she was asked about her “encounter with the police” where, outside a vaccination centre, police officers prohibited her serving notices of liability to the those injecting the public, “the vaccinators”.  “It’s not legal,” de Buisseret said, “because it’s not being authorised and regulated under the correct [legal] framework.”  She goes on to explain, “This is not a human medicine. These, specifically the mRNA injections, cannot be legally defined either as a vaccine or as a human medicine, which is how they’ve been regulated – under the human medicines regulations.”  According to expert teams the mRNA synthetic genetic code, which is nanotechnology encased in a lipid particle casing, fits the definition of a medical device rather than a human medicine.  As such, it should be regulated under the medical device regulations.

The question of legality of the mass vaccination programme goes across several areas of law. It’s not just whether it’s being regulated properly under that particular bit of legislation. “And they’ve only got an emergency temporary authorization on the basis that a) there’s an emergency well, there is no emergency because we’ve got alternative treatments and we know the figures have been manipulated etc.  And, as for the basis on which to justify it: it has to be on the basis that there are no alternative treatments, well there are. So, their whole legality comes massively into question which is why I was very firm saying it’s not legal,” Buisseret said.

“With criminal law you have to commit the acts. The acts that led to the harm, suffering, loss or death. And you have to have committed the act with intent, to do harm. But the thing about intent is that you can infer the intent because it’s based on knowledge. So, if you know that the act you’ve committed is going to cause harm, loss, suffering, or death then that’s your intent to do it,” de Buisseret explained.  She continued, “it crosses many different areas of both statute law, civil law, criminal law, common law, God’s laws, international laws. So, frankly, the legal analysis is vast because there is so many different laws being broken. It’s absolutely horrendous. We lawyers are totally gobsmacked at just how all the laws seem to be being trashed and nobody seems to care to uphold them. And it’s a crisis.”

She points out that another of the reasons the UK was in such crisis is because the police – being our public servants are obliged to investigate if a member of the public comes with prima facie evidence but, – are just “not interested” and do not even “want to look at it”.

“In our local community [we established] that there was sufficient evidence to know that various clinics in the area would not obtaining informed consent from people.   And that people were in fact dying and being seriously harmed by [the Covid injection],” de Buisseret said.

“And yet, when you hear how those defences were put forward and then how the tribunal dealt with them, you will see very clearly that, there is first of all, ignorance of the law is no defence. So, the fact that people say ‘well, I didn’t know I was breaking the law’, is no defence,” said de Buisseret.  And, turning a blind eye or just assuming any comparison to the Nuremberg Trials is “a crazy conspiracy theory”, is ignorance. Because, it is a legal process of bringing people to account.

De Buisseret gave some ideas how the public can get involved in their “Informed Consent Campaign” and if you want to find out more, they will be setting up a website “Consent Alliance” and a channel on Telegram.

“COVID jabs are experimental and still in phase 3 clinical trials,” de Buisseret explained. “The Nuremberg Code therefore applies. The injector MUST obtain the individuals fully informed consent freely given. All MATERIAL RISKS must be made clear to them and an individual risk assessment conducted.”

In April, Doctors for COVID Ethics served Notices of Liability for COVID-19 vaccine harms and deaths on all European Parliament Members.