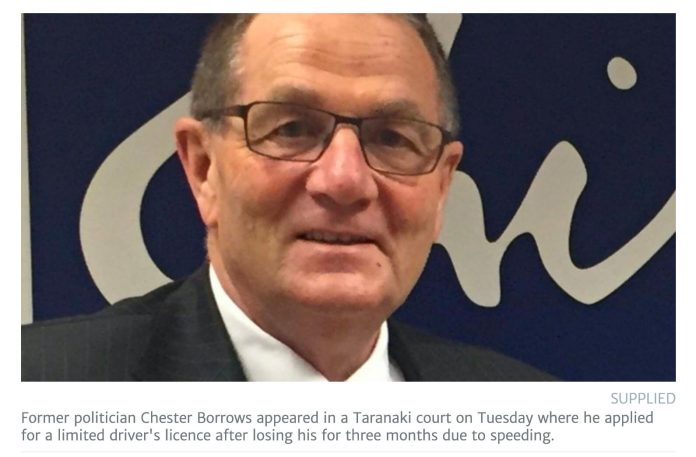 Former politician and police officer Chester Borrows has made a brief appearance in court.

The 62-year-old, who was with National for 12 years before retiring as the Whanganui electorate MP in 2017, was in Hāwera District Court on Tuesday where he was granted a limited driver’s licence.

Only weeks before Christmas Borrows, who is based in the South Taranaki town of Hāwera, had his licence suspended for three months after racking up 100 demerit points within two years.

At the time, Borrows, who currently chairs a Government advisory group charged with helping reform the criminal justice system, told Stuff he was deeply embarrassed about the misdemeanours.

The penalty points followed four speeding tickets issued to Borrows within the two-year time frame. Demerit points are given for all non-speed camera speeding infringements. The penalty points given depend on by how much the speed is exceeded, with the maximum points of 50 given to drivers exceeding the speed limit by more than 35 kilometres per hour.

At the end of a demerit suspension, the driver will be unlicensed until they have reinstated their licence.

A limited licence can be granted during the period of suspension under circumstances of extreme hardship, such as not being able to get to work.

Defence lawyer Nathan Bourke represented Borrows, who was called by his legal name of Kerry James Borrows and was not required to stand in the court dock.

It’s not Borrows first appearance in court, in 2017 he was found not guilty of a charge of careless driving causing injury after driving over the foot of a protester in Whanganui in 2016.

Previous articleAllah Must Be Pissed With His Weird Flock
Next articlePolitical Raid?