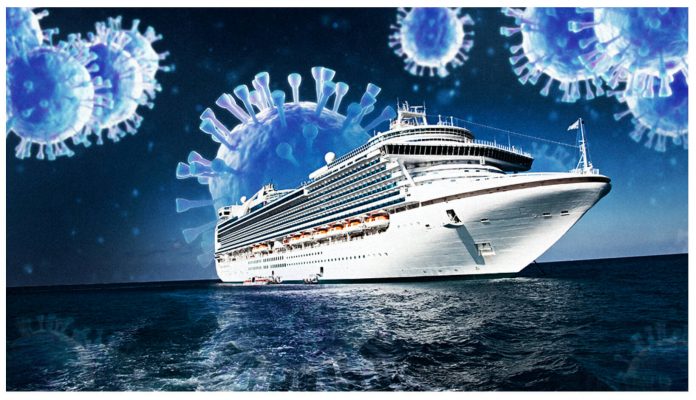 Cruise ships are floating quarantine death camps, since all passenger rooms share the same (contaminated) air, and there’s no way to escape

As reported by the South China Morning Post, the Diamond Princess cruise ship that’s currently quarantined off the coast of Japan had 70 confirmed infections just two days ago, but now that numbers has leaped to 136 confirmed infections as testing is expanded to a large number of passengers. Early test results showed that 22% of the passengers were testing positive for the Wuhan coronavirus, and while that number may settle as more passengers are tested, it’s legitimately worrisome to anyone thinking about taking a cruise.

Now a new story out of Liberty Times Net in Taiwan reveals that 100 more passengers are showing symptoms such as fever, raising the possibility that hundreds more passengers might have already been infected with the coronavirus and are in the incubation period themselves. If this trend continues, we could be looking at several hundred infection passengers eventually being identified.

These infections are no fault of the cruise lines themselves. Rather, they are a product of the very structure of cruise vacations: Constricted vessels carrying thousands of people from different countries who all share the same air, same hand rails, same elevator buttons, same poker machines, and so on. A cruise ship is a paradise for a pandemic, since it’s a captive population of potential victims who are, by their very nature, co-mingling in shared public spaces throughout the entire cruise experience.

So why, then, isn’t the media warning people about the risks associated with taking a cruise amid a global pandemic outbreak that has infected people in dozens of countries?

The answer, of course, is that the media wants to keep the public in the dark in order to protect the faith-based stock market rally and stock prices of the cruise lines, which are highly vulnerable to changes in public sentiment.

Cruise lines in a state of emergency, trying to keep the passengers coming

My personal opinion is that any person who boards a cruise line right now is certifiably insane, but the cruise lines are working overtime to assuage such fears and keep passengers as safe as possible. Some cruise lines have already banned passengers from China, Hong Kong and Japan, for example, which is probably a prudent move (although sure to elicit cries of “racism” from lunatic Leftists).

No doubt those same cruise lines are also running accelerated sanitation operations aboard all their ships, perhaps doubling the cleaning schedules and using more aggressive virucidal solutions that are documented to kill viruses on surfaces. (The Wuhan coronavirus is now known to survive up to five days on surfaces.)

These steps are wise, and they may indeed help halt infections from spreading. However, the existence of coronavirus “super spreaders” — who can spread the infection to 50 or more people just by standing among them in a crowd — bypasses the utility of such measures. When the virus is highly infectious and spreads through the air, it almost doesn’t matter how much chlorine you dump into the pool on the top deck, in other words.

Despite their best efforts, cruise lines simply do not have the screening capacity, nor the on-board infrastructure to properly handle a sudden outbreak of a BSL-4 biological weapon that is now known to easily evade detection / screening efforts.

The complicity of the mainstream media, which now seems to want the virus to spread even more quickly

The complicity of the mainstream media in spreading the coronavirus pandemic and worsening human suffering and death is abundantly found in the fact that no media outlet is warning passengers to avoid boarding cruise ships. Cruise ships are essentially floating quarantine death camps, in my view, and you are literally a prisoner on the ship, with no right to leave the ship once a quarantine has been declared. (If you doubt that statement, ask the people on the Diamond Princess ship about their experience… they are essentially prisoners.)

At the same time, the passenger room air isn’t isolated on a room-by-room basis, meaning you’re often breathing the same air that’s been mixed with other passengers’ rooms. Obviously, when you’re dealing with an airborne pathogen, this fact becomes more than a bit concerning.

Once a pandemic is declared on board your ship, you are essentially a prisoner in your own room, completely dependent on the ship crew (which is also exposed) to bring you food, water, soap, medicine and other basic needs. You are not allowed to de-board the ship, nor to even walk around on the top decks without supervised permission, because allowing passengers to co-mingle would obviously spread the pandemic even further. So cruise ships, in my opinion, quickly become floating quarantine prison camps / death camps where you have zero personal freedom and no control over your own fate.

Again, this is no fault of the cruise line companies themselves, it’s an inherent property of the very structure of cruises and ships.

The financial reality of running a cruise line

Cruise line companies are heavily burdened with debt due to the extremely high capital costs associated with building their ships. The only way to service that debt is to have a steady stream of passengers paying the bills. When passengers stop buying cruise tickets, the fixed debt service costs of cruise lines don’t get any lower, which means cruise line companies still have to keep paying the same debt costs, even if retail revenues plummet.

This is why any interruption of cruise passengers sets off panic in the halls of the cruise line companies. Many are operating with very thin margins and likely have narrow profits after their debt is serviced. Sustained interruptions in passenger traffic can seriously threaten the financial solvency of these companies, if such interruptions are allowed to continue for extended periods of time.

Note carefully that in all my reporting here, I’m not blaming the cruise lines for anything. They haven’t done anything wrong. As far as I can tell, they’re acting responsibly for those few ships that have already experienced outbreaks, and they are no doubt ramping up contingency plans if more ships experience similar outbreaks. But running a tourism-oriented business carries inherent risks, and one of those risks is the risk of a global pandemic. When people decide to isolated themselves from crowds and vacation activities, all sorts of tourism-related industries will plunge, including ski resorts, cruise ships, Disneyland and everything else you can imagine.

The sad reality is that cruise line companies can do everything right and still get financially clobbered by this “black swan” event that no one could have forecast. (Well, I did publicly warn the entire world about this eight years ago, in 2012, but I was banned and nobody listened.)

In summary, in my view cruises are made inherently more risky by the presence of this exploding global pandemic, which has already infected a considerable number of passengers on at least two cruise ships (that we know of). Given these facts, I would personally not step foot on a cruise ship right now, not until this whole coronavirus pandemic blows over, which will happen sooner or later, one way or another, perhaps producing millions of dead around the world if its spread is not immediately stopped.

Being stuck on a ship in the middle of the ocean is not a good way to survive a global pandemic, bluntly stated. At least with air travel, they get you off the plane quickly, since you aren’t expected to actually live on the plane for two weeks. On a cruise ship, you’re basically being “kenneled” for as long as they want to keep you there.

Just wait until there’s a vaccine available for the Wuhan coronavirus: They probably won’t let you leave the ship until you agree to take the vaccine shot.

Meanwhile, look at this map and tell me it’s not coming here. Someone needs to tell Cindy to start preparing for it’s outbreak. Wearing a head scarf will not help her in this case. 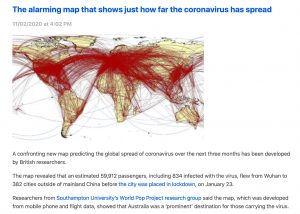 Previous articleNow We Have Proof
Next articleLatest SSANZ News

How Farmers And Scientists Are Engineering Your Food “Flavour is a re-emerging trend, without a doubt,” says Franco Fubini, founder of fruit and vegetable supplier...
Read more
World News

Why There Are So Few Female Chess Grandmasters. By Walter Block. At the time of writing, there are 1,731 chess grandmasters, the acknowledged leaders in their field....
Read more