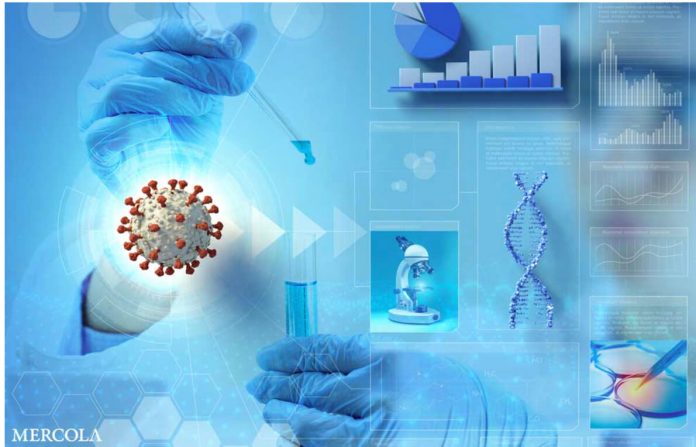 “Let’s start with a thought experiment: If an engineering design flaw exists and no one measures it, can it really injure people or kill them?” a Twitter user named Ehden writes. He goes on to discuss an overlooked aspect of the COVID mRNA shots, something called “codon optimization,” which virtually guarantees unexpected results.

“Trying to tell your body to generate proteins is hard for many reasons. One of them is the fact that when you try to run the protein information via ribosomes which process that code and generate the protein, it can be very slow or can get stuck during the process.

Luckily, scientists found a way to overcome this problem, by doing code substitution: instead of using the original genetic code to generate the protein, they changed the letters in the code so the code would be optimized. This is known as Codon Optimization.”

A codon consists of three nucleotides, and nucleotides are the building blocks of DNA. An August 2021 article in Nature Reviews Drug Discovery, addressed the use of codon optimization as follows:

“The open reading frame of the mRNA vaccine is the most crucial component because it contains the coding sequence that is translated into protein.

Although the open reading frame is not as malleable as the non-coding regions, it can be optimized to increase translation without altering the protein sequence by replacing rarely used codons with more frequently occurring codons that encode the same amino acid residue.

Although replacement of rare codons is an attractive optimization strategy, it must be used judiciously. This is because, in the case of some proteins, the slower translation rate of rare codons is necessary for proper protein folding.

Specifically, unmodified mRNA is recognized by pattern recognition receptors, such as Toll-like receptor 3 (TLR3), TLR7 and TLR8, and the retinoic acid-inducible gene I (RIGI) receptor. TLR7 and TLR8 receptors bind to guanosine- or uridine-rich regions in mRNA and trigger the production of type I interferons, such as IFNα, that can block mRNA translation.

Both the Moderna and Pfizer–BioNTech SARS-CoV-2 vaccines … contain nucleoside-modified mRNAs. Another strategy to avoid detection by pattern recognition receptors, pioneered by CureVac, uses sequence engineering and codon optimization to deplete uridines by boosting the GC content of the vaccine mRNA.”

According to Ehden, 60.9 percent of the codons in COVID shots have been optimized, equivalent to 22.5 percent of the nucleotides, but he doesn’t specify which shot he’s talking about, or exactly where the data came from.

That all mRNA COVID shots are using codon optimization to one degree or another is clear, however. A July 2021 article in the journal Vaccines specifically evaluates and comments on the Pfizer/BioNTech and Moderna mRNA shots, noting:

Both 5′-UTR and the downstream 3′-UTR should be optimized for mRNA stability. The replacement of uridine by N1-methylpseudourinine (Ψ) complicates some of these optimization processes because Ψ is more versatile in wobbling than U. Different optimizations can conflict with each other, and compromises would need to be made.

I highlight the similarities and differences between Pfizer/BioNTech and Moderna mRNA vaccines and discuss the advantage and disadvantage of each to facilitate future vaccine improvement. In particular, I point out a few optimizations in the design of the two mRNA vaccines that have not been performed properly.”

What Can Go Wrong?

One key take-home from the Nature Reviews Drug Discovery article cited above is that replacing rare codons “must be used judiciously,” as rarer codons can have slower translation rates and a slowed-down rate is actually necessary to prevent protein misfolding.

The spike protein is the toxic part of the virus responsible for the most unique effects of the virus, such as the blood clotting disorders, neurological problems and heart damage. To expect the COVID shot to not produce these kinds of effects would be rather naïve.

A (adenine) and U (uracil) in the third position are rare, and the COVID shots replace these A’s and U’s with G’s (guanine) or C’s (cytosine). According to Seneff, this switch results in a 1,000-fold greater amount of spike protein compared to being infected with the actual virus.

What could go wrong? Well, just about anything. Again, the shot induces spike protein at levels unheard of in nature (even if SARS-CoV-2 is a “souped up” manmade concoction), and the spike protein is the toxic part of the virus responsible for the most unique effects of the virus, such as the blood clotting disorders, neurological problems and heart damage.

So, to expect the COVID shot to not produce these kinds of effects would be rather naïve. The codon switches might also result in protein misfolding, which is equally bad news. As explained by Seneff in our previous interview:

The spike proteins that these mRNA vaccines are producing … aren’t able to go into the membrane, which I think is going to encourage it to become a problematic prion protein. Then, when you have inflammation, it upregulates alpha-synuclein [a neuronal protein that regulates synaptic traffic and neurotransmitter release].

So, you’re going to get alpha-synuclein drawn into misfolded spike proteins, turning into a mess inside the dendritic cells in the germinal centers in the spleen. And they’re going to package up all this crud into exosomes and release them. They’re then going to travel along the vagus nerve to the brainstem and cause things like Parkinson’s disease.

So, I think this is a complete setup for Parkinson’s disease … It’s going to push forward the date at which someone who has a propensity towards Parkinson’s is going to get it.

And it’s probably going to cause people to get Parkinson’s who never would have gotten it in the first place — especially if they keep getting the vaccine every year. Every year you do a booster, you bring the date that you’re going to get Parkinson’s ever closer.”

Other significant threats include immune dysfunction and the flare-up of latent viral infections, which is something Mikovits has been warning about. In our previous interview, she noted:

You’ve bypassed the plasmacytoid dendritic cell, which combined with IL-10, by talking to the regulatory B cells, decides what subclasses of antibodies to put out. So, you’ve bypassed the communication between the innate and adaptive immune response. You now miss the signaling of the endocannabinoid receptors …

A large part of Dr. [Francis] Ruscetti’s and my work over the last 30 years has been to show you don’t need an infectious transmissible virus — just pieces and parts of these viruses are worse, because they also turn on danger signals. They act like danger signals and pathogen-associated molecular patterns.

So, it synergistically leaves that inflammatory cytokine signature on that spins your innate immune response out of control. It just cannot keep up with the myelopoiesis [the production of cells in your bone marrow]. Hence you see a skew-away from the mesenchymal stem cell towards TGF-beta regulated hematopoietic stem cells.

This means you could see bleeding disorders on both ends. You can’t make enough firetrucks to send to the fire. Your innate immune response can’t get there, and then you’ve just got a total train wreck of your immune system.”

We’re now seeing reports of herpes and shingles infection following COVID-19 injection, and this is precisely what you can expect if your Type I interferon pathway is disabled. That’s not the end of your potential troubles, however, as these coinfections could accelerate other diseases as well.

For example, herpes viruses have been implicated as a trigger of both AIDS and myalgic encephalomyelitis (chronic fatigue syndrome or ME-CFS). According to Mikovits, these diseases don’t appear until viruses from different families partner up and retroviruses take out the Type 1 interferon pathway. Long term, the COVID mass injection campaign may be laying the foundation for a rapidly approaching avalanche of a wide range of debilitating chronic illnesses.

As noted in the Vaccines article cited earlier, the codon optimization in the Pfizer and Moderna shots could be problematic:

“As mammalian host cells attack unmodified exogeneous RNA, all U nucleotides were replaced by N1-methylpseudouridine (Ψ). However, Ψ wobbles more in base-pairing than U and can pair not only with A and G, but also, to a lesser extent, with C and U.

Such readthrough events would not only decrease the number of immunogenic proteins, but also produce a longer protein of unknown fate with potentially deleterious effects …

The paper also points out the importance of vaccine mRNA to be translated accurately and not merely effectively, because if the wrong amino acids are incorporated, it can confuse your immune system and prevent it from identifying the correct targets.

Accuracy is also important in translation termination, and here it comes down to selecting the correct stop codons. Stop codons (UAA, UAG or UGA), when present at the end of an mRNA coding sequence signals the termination of protein synthesis.

According to the author, both Pfizer and Moderna selected less than optimal stop codons. “UGA is a poor choice of a stop codon, and UGAU in Pfizer/BioNTech and Moderna mRNA vaccines could be even worse,” she says.

What Health Problems Can We Expect To See More Of?

While the variety of diseases we may see a rise in as a result of this vaccination campaign are myriad, some general predictions can be made. We’ve already seen a massive uptick in blood clotting disorders, heart attacks and stroke, as well as heart inflammation.

Mikovits also suspects many will develop chronic and debilitating diseases and will die prematurely. At highest risk, she places those who are asymptomatically infected with XMRVs and gammaretroviruses from contaminated conventional vaccines. The COVID shot will effectively accelerate their death by crippling their immune function. “The kids that are highly vaccinated, they’re ticking time bombs,” Mikovits said in my May 2021 interview.

What Are The Options?

While all of this is highly problematic, there is hope. From my perspective, I believe the best thing you can do is to build your innate immune system. To do that, you need to become metabolically flexible and optimize your diet. You’ll also want to make sure your vitamin D level is optimized to between 60 ng/mL and 80 ng/mL (100 nmol/L to 150 nmol/L).

I also recommend time-restricted eating, where you eat all your meals for the day within a six- to eight-hour window. Time-restricted eating will also upregulate autophagy, which may help digest and remove spike protein. Avoid all vegetable oils and processed foods. Focus on certified-organic foods to minimize your glyphosate exposure.

Sauna therapy may also be helpful. It upregulates heat shock proteins, which can help refold misfolded proteins. They also tag damaged proteins and target them for removal.