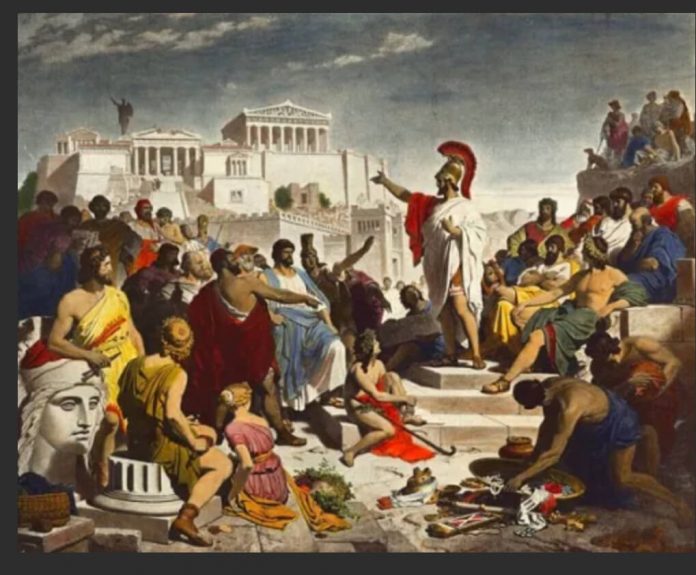 Democracy, Then and Now.

The word is, of course, Greek and literally means “rule” (kratos) by the “common people” (demos). That is to say, democracy is rule of the whole political community (polis) by a part of that community.

There are other parts: principally the few — whether understood as the rich, the powerful, the moral, the wise, the brave, the strong, or some combination thereof.

There also may be a “one,” in the de jure sense of a monarch or the de facto sense of someone so preeminent in virtue that all, or nearly all, recognize his innate superiority — for instance, Pericles in nominally democratic Athens.

Classical philosophers and historians alike condemn democracy as a bad form of government, in part because of its partiality but mostly because of the specific nature of the demos, which they contend is the polis’s least wise and least moderate part. …

The classics instead recommend what Aristotle calls a “mixed” regime, in which no one part of the political community has a permanent upper hand but all share power, each contributing its particular strength(s) and checking the others’ particular weaknesses.

An updated version of this “mixed regime” is more or less what America’s founders worked to create. Sovereignty would rest with the people as a whole, but “the common people” as a class would not predominate. Power would be shared across regional, factional, social, and economic lines, with no one constituency ever gaining total control.

Our founders avoided the word “democracy,” in part because of its bad reputation, but also because they didn’t believe the government they built was — strictly speaking — democratic. Yet over time, “democracy” came to mean something like their solution to the political problem: popular sovereignty, a government whose fundamental course is set by voting, yet whose authorities are limited by natural rights, enumerated powers, checks and balances, the separation of powers, federal versus state and local spheres of authority, and so on.

More recently, “democracy” has come to mean one thing and one thing only: majority rule. Of course, the core purpose of democratic — and republican — rule is to ensure a voice for the collectivity, to prevent the state from becoming an instrument that serves only the few, or the one.

But pure majority rule takes us back to the original meaning of “democracy”: the rule of a part over the whole. Which is essentially what “democracy” means in Blue cities and states now. Sure, all the Red folk get to vote. For the ruling class, this alone satisfies the requirements of justice, of “democracy.” That the Reds are outvoted every time, their preferences never considered, their interests never respected, is not merely irrelevant but a positive good. If those people had their way, we know what they’d do! “Progress” and “justice” require that they never get the chance.

This is why fundamentally republican but not purely democratic institutions such as the Electoral College are so viciously attacked and despised. They hinder the operation of “democracy.” In this understanding, the 2016 election was illegitimate simply because Hillary won the popular vote. But consider: she won California alone by 4.3 million votes — and lost the other 49 states by 1.4 million. …

States such as California, Colorado, Illinois, New York, and now Virginia are utterly dominated by one party, and often one city, which amounts to the same thing. This is how Virginia — cradle of the American Revolution and home to four of our first five presidents — suddenly, just like that, became implacably hostile to the first two amendments to the United States Constitution. Five cities and counties, three adjacent to Washington, D.C., essentially dictate to the other 128.

The uncomprehending angst of people who’ve lived the same way, in the same places, for generations suddenly finding themselves harassed by a hostile government — ostensibly “theirs” — is mocked by the ruling class as a lament over “lost privilege.” After Virginia flipped from purple to Blue in 2019, the state legislature immediately enacted draconian gun restrictions that flew in the face of centuries of tradition and peaceful practice. Too bad! You lost! That’s “democracy.” As Joel Kotkin has remarked, “The worst thing in the world to be is the Red part of a Blue state.”

We should not, however, give the powers-that-be too much credit for principled consistency. If and when popular majorities produce outcomes the rulers don’t like, their devotion to “democracy” instantly evaporates. Judges, administrative state agencies, private companies — whichever is most able in the moment to overturn the will of unruly voters — will intervene to restore ruling class diktats. On the other hand, when voters can be counted on to vote the right way, then voting becomes the necessary and sufficient step for sanctifying any political outcome. It doesn’t even matter where the votes (or voters) come from, so long as they vote the right way. The fact that they vote the right way is sufficient to justify and even ennoble their participation in “our democracy.”

Blues perpetually outvoting Reds and ruling unopposed: this, and only this, is what “democracy” means today.

Reds, increasingly, are catching on. They know the game is rigged, that they cannot win, and the veneer of their participation and consent is a sham.

This is why the gaslighting is being dialed up to the lumen levels of blue stars. Every objection to Blue despoilation is now openly ascribed to “white supremacy.” Don’t want to be late for work because regime-favored thugs “protesters” are illegally blocking an intersection? White supremacy! Object to being beaten on the streets? White supremacy! Want to see the laws enforced equally and impartially? White supremacy!

Agitating about an immutable characteristic like race is a distraction from economic class, as well as a surefire way to produce a resentful, divided population.

The Democrats opened Pandora’s box by abandoning the white working class, and instead forming a coalition of the fringes — bidding for the affections of favored identity groups with promises of special treatment. Thus, the left expect to ride to power forever on demographic change.

So dumb. They might end up in charge, but it won’t be over a dynamic admirable nation on the up-and-up like the USA of old.

Previous articleHave Your Say
Next articleHow Did A Disease With No Symptoms Take Over The World?