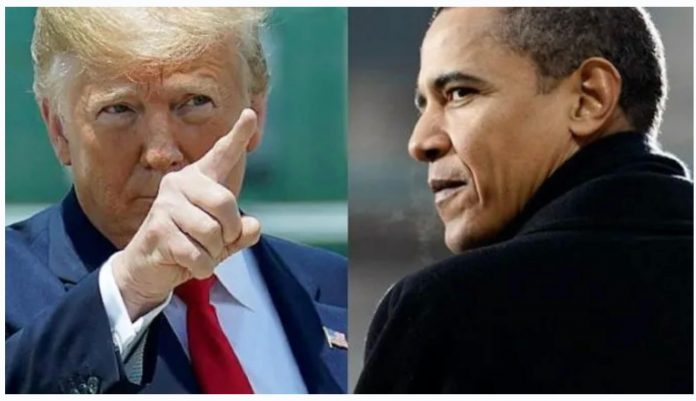 Trump Is The First POTUS In 40 Years Not To Start a New War – Democrats Outraged:

President Donald Trump is the first president of the United States not to start a new war in his first term in the Oval Office for forty years — and globalist Democrats are outraged.

“Sometimes it’s easy to miss the things that don’t happen,” said Tucker Carlson this week. “We are living in an unusual period in American history where we are living under an administration that hasn’t started a new war. That hasn’t happened in more than 40 years.“

“No one ever says that. Some people are upset about it. Some people want more war. A lot more war,” Tucker continued. “If you were watching the proceedings at the Democratic National Convention last night, you heard speaker after speaker urging America’s young people to get out there and get killed in some foreign country they can’t find on a map.”

“You saw the Democratic nominee from several years ago, John Kerry, urge voters to vote Democrat so we can have more wars.“

In contrast to Trump, Barack Obama, the president who promised change, actually provided more of the same. The former president can congratulate himself on being the first Nobel Peace Prize winner to bomb seven different countries back to the Stone Age.

The president who preached hope also kept the military-industrial complex in fine fettle, selling a record $115 billion in weapons to Saudi Arabia, the world’s most repressive regime, and destabilized entire regions, creating a vacuum in which terrorists thrived.

During Barack Obama’s presidency, the U.S. bombed seven countries while supporting other destabilizing military actions throughout the Middle East.

Here’s a look at these seven countries and the effects of bombing. MPN reports:

Iraq — The Obama administration has conducted over 5,000 airstrikes in Iraq and Syria in just the past year, David Lerman reported for Bloomberg Business. Despite ongoing U.S. military involvement, terrorism continues to be a deadly presence in Iraq’s cities.

Libya — While the European Union and its allies carried out many of the airstrikes during Libya’s civil war, the U.S. was instrumental in destabilizing that country through both military aid and direct support, especially during the lead up to Gen. Moammar Gadhafi’s overthrow in 2011. Now ISIS is also gaining a stronghold here and the country has been described as a failed state.

Pakistan — Drone strikes are also frequent in Pakistan, where the Bureau of Investigative Journalism estimated that only 4 percent of the victims could be identified as al-Qaida members. Although drone strikes on Pakistan began under George W. Bush, their frequency has dramatically increased under Obama, RT reported last year.

Somalia — Over 100 U.S. troops have been stationed in Somalia since 2007, Reuters reported last year. In September, the U.S. again carried out airstrikes there, apparently killing Ahmed Abdi Godane, leader of the extremist group Al-Shabaab, which the U.S. claimed was allying with al-Qaida.

Syria — The U.S. renewed its bombing campaignin Syria earlier this month, with U.S. war planes taking off from bases in Turkey. Airstrikes were also used in a failed attempt to defend “Division 30,” the failed American attempt to train so-called “moderate” Syrian rebels.

Yemen — U.S. cables revealed by WikiLeaks show that Yemeni officials have allowed airstrikes, which began under George W. Bush, to continue under the Obama administration. RT reported last year:
“US bombing raids in Yemen are almost solely carried out by drones and they have been increasing in intensity in recent years. … A report by Human Rights Watch in 2013 analyzed six airstrikes in Yemen carried out since 2009. The organization found that out of the 82 people who died in the airstrikes, 57 were civilians.

In all, the U.S. has bombed 14 predominantly Muslim countries since 1980. The death toll from all modern wars in the Middle East may be as high as 4 million dead Muslims and Arabs. Repeated military campaigns have destabilized the Middle East, giving rise to terror groups like ISIS, allowing for sectarianism to blossom, and necessitating further bombing, in what has been described as a “perpetual protection racket.”

The Killer in the Bloodstream: the “Spike Protein” Has there ever been a greater threat to humanity than the Covid vaccine? By Mike Whitney “From the beginning Covid...
Read more
Leftie Stupidity

Here’s a better choice for the new movie. This actress would play the role much more convincingly. She has these qualities: Second rate at her...
Read more
Leftie Stupidity

Should Trans women be able to compete with normal Women in sport? My answer is no. There is far too much medical evidence to quote...
Read more