You Stupid Boy
Home Leftie Stupidity Democrats Paid For A Wall ... In Jordan. Hypocrisy From The Left.

Democrats Paid For A Wall … In Jordan. Hypocrisy From The Left. 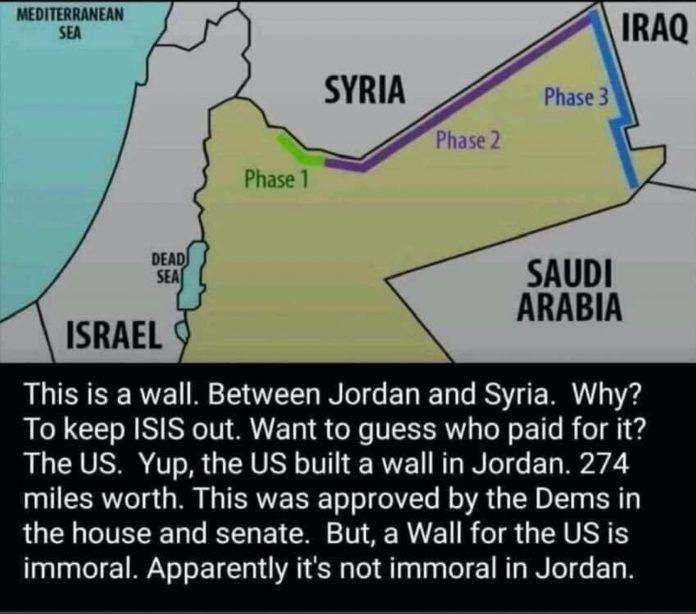 The Great Wall of Jordan:  The Obama Admin spent half a billion to build it to keep Syrian refugees/Arms/ISIS OUT

The Great Wall of Jordan: How the US Wants to Keep the Islamic State

The wall, which began as a $20 million project in 2008 to erect a set of surveillance towers along a 30-mile (50 km) stretch of the border with Syria, has since expanded into a program costing half a billion dollars, according to defense officials who spoke to VICE News. Called the Jordan Border Security Program or JBSP, the wall is ostensibly meant to stop weapons of mass destruction from getting out, but since 2013 has refocused on detecting Islamic State fighters and arms smuggling, as well as refugees, on both sides of the border.

When completed later this decade, the border wall will have a camera-studded high-security fence, plus a network of ground sensors and a set of fixed and mobile surveillance towers that will be able to see and detect activity five miles away on either side of the fence. The entire system funnels into a joint US-Jordanian command center, where the United States also shares additional intelligence with Jordan about external threats to the kingdom.

Those with long memories have recalled that prominent Democrats — including Sen. Charles E. Schumer and then-Sens. Barack Obama and Hillary Clinton — once heartily approved of funding a barrier wall on the southern U.S. border. Indeed, there are multiple records of their sentiments from back in the day, when the earnest lawmakers embraced border security without gusto. Now comes Part Two.

As our own part time PM is shown to be a weapons grade hypocrite, so do these Democrats. While they were approving and building this wall in Jordan, they were fighting Trump trying to complete the border wall with Mexico. Obviously, the Left are more interested in “Do as I say, Not as I do”