Diagnosed As Suffering From ‘Climate Change’ 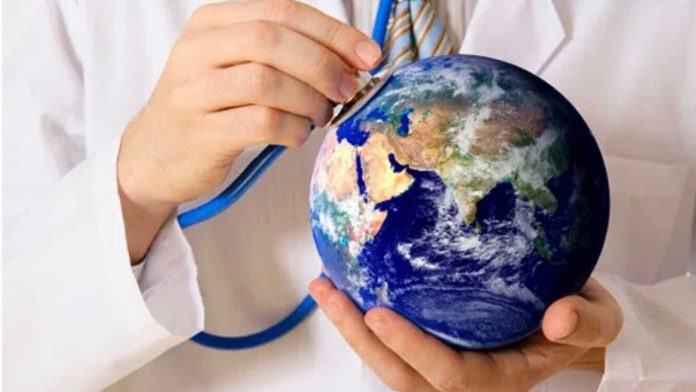 A woman from Canada has become possibly the first patient in the world to be diagnosed as suffering from “climate change”.

Doctors say that heatwaves and poor air quality are responsible for her breathing problems and claimed that climate change was to blame.

The Independent reports: Dr Kyle Merritt, responsible for the diagnosis of the senior citizen from Nelson in British Columbia who suffered from asthma, said this was the first time in a decade that he wrote climate change as a cause of suffering.

“If we’re not looking at the underlying cause, and we’re just treating the symptoms, we’re just gonna keep falling further and further behind,” the emergency room doctor told the Glacier Media.

“It’s me trying to just… process what I’m seeing,” he adds.

In June Canada suffered from a historic heatwave, followed by a thick smog season triggered by wildfires.

British Columbia, the westernmost province of Canada, saw record-breaking temperatures in June, which experts believe led to the death of over 500 people. The wildfires caused the air quality to become 43 times worse than levels acceptable as safe throughout July and August.

“We’re in the emergency department, we look after everybody, from the most privileged to the most vulnerable, from cradle to grave, we see everybody. And it’s hard to see people, especially the most vulnerable people in our society, being affected. It’s frustrating,” Dr Merritt told the outlet.

The patient, who was in her seventies, was diagnosed in the summer soon after the heatwave that Dr Merritt says directly contributed to making her ailment worse.

“She has diabetes. She has some heart failure .… She lives in a trailer with no air conditioning,” he said. “All of her health problems have all been worsened. And she’s really struggling to stay hydrated.”

The diagnosis from Dr Merritt has led to other doctors in the province launching an initiative called Doctors and Nurses for Planetary Health.

Healthcare professionals are using the group to advocate for better health by protecting the environment, they said on the website.

“We are deeply concerned about the climate crisis and its impact on health,” the group’s website said. “This summer, our patients experienced extreme weather events of heat dome, drought, and severe wildfires.”