You Stupid Boy
Home World News Do You Believe This? 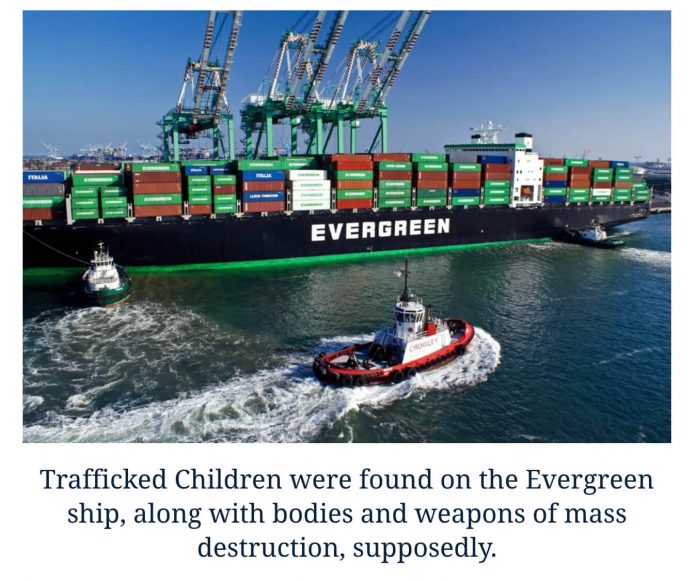 Trafficked Children found on the Evergreen ship, along with bodies and weapons of mass destruction – supposedly.

It’s said that over a thousand trafficked children and dead bodies have been recovered from shipping containers on the Evergreen barge.

The Evergreen barge was stuck in the Suez Canal in March 2021 for a week.

What happened with the Evergreen ship?

By order of the Egyptian President, the containers were taken off the ship and searched by US Navy Seals.

The Evergreen Corporation is co-owned by Walmart and the Clinton Foundation – known for international child trafficking.

The Deep State and Child Trafficking

Trafficked children are used for rape, torture and satanic sacrifice.

The Evergreen ship carried not only trafficked children, but Weapons of Mass Destruction. 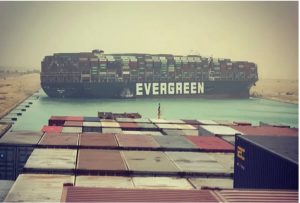 Other ships blocked in the Suez Canal also carried weapons – believed to be used to start a war in the Middle-East.

Why are these ships carrying children and weapons of mass destruction headed for the Middle East?

I’m sure Obama, the Clintons and the Bush family know.

Human traffickers and cartels were arrested, losing critical income for their owners worldwide.

The Deep State Operation was said to have lost 400 million dollars an hour while the ships were stuck for the week in the Suez Canal.

The Deep State is required by their twisted rules to show us what they are doing right before our eyes.

Predictive Programming is used to show people what will happen in the future, via television, movies and music.

In this case, the Dexter tv show episode where kids were found in Evergreen containers says it all.

Why were Special Ops US Navy Seals investigating shipping containers aboard the Evergreen?

Was the Evergreen purposely run aground?

These large cargo barges, such as the Evergreen, for the most part, are on auto-pilot most of the time.

It’s rumored that the good guys hacked into the Evergreen ship software, causing it to run into the bank, wedging it in the Suez Canal.

According to Guido Fawkes on Telegram on Thurs. 1 April: “Ever Given / Evergreen has been boarded by the US Navy Seals and they have opened several cargo containers with live and dead inside. The vessel is in Bitter Lake and the Navy is performing unloading procedures. No images will be leaked.”

On March 29th, 2021, ex-Navy Seal Michael Jaco put out a video on the Evergreen Ship giving his input stating “Evergreen Ship Will Be a Big Deep State Reveal!- Where Is the Ammo? Coming Soon as I Reveal Why!

This story on Evergreen and children being saved will require a bit more research.

The Evergreen was stopped for search but hard evidence has not been released as far as I know.

Previous articleWokeness
Next articleHave Your Say