You Stupid Boy
Home Leftie Stupidity Do You Know A "Karen"? 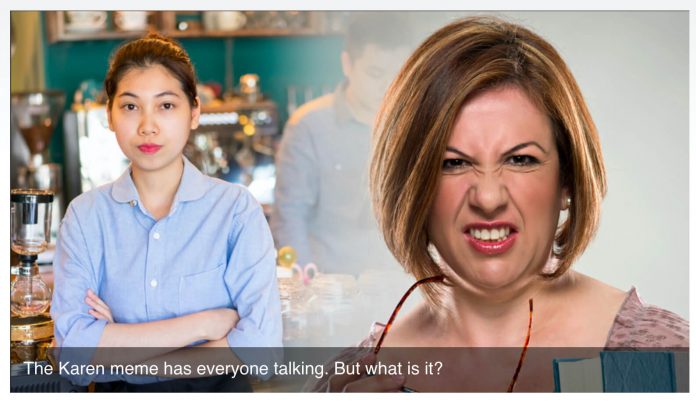 First, there was the ‘can I speak to the manager’ Karen.

Then came the blonde bob Karen.

Now, there is the Central Park Karen.

New York woman Amy Cooper lost her job after getting into an argument with African-American man Christian Cooper, no relation, in Central Park after he asked her to leash her dog – in a leash area.

“I’m taking a picture and calling the cops,” Amy Cooper is heard saying in the video. “I’m going to tell them there’s an African-American man threatening my life.”

Amy has apologised but the damage is done. She has become a Karen.

The video went viral, launching a new wave of memes and heated debate over if the Karen meme is ‘problematic’.

Central Park this morning: This woman’s dog is tearing through the plantings in the Ramble.ME: Ma’am, dogs in the Ramble have to be on the leash at all times. The sign is right there.HER: The dog runs are closed. He needs his exercise.ME: All you have to do is take him to the other side of the drive, outside the Ramble, and you can let him run off leash all you want.HER: It’s too dangerous.ME: Look, if you’re going to do what you want, I’m going to do what I want, but you’re not going to like it.HER: What’s that?ME (to the dog): Come here, puppy!HER: He won’t come to you.ME: We’ll see about that…I pull out the dog treats I carry for just for such intransigence. I didn’t even get a chance to toss any treats to the pooch before Karen scrambled to grab the dog.HER: DON’T YOU TOUCH MY DOG!!!!!That’s when I started video recording with my iPhone, and when her inner Karen fully emerged and took a dark turn…

Karen is everywhere. But who actually is she?

Karen is a concept.

Like most things that start on the world wide web, the exact origin is hard to pin down, it’s believed it first appeared in 2014.

It has been linked to the film Mean Girls where one of the main characters says to another: “Oh my God, Karen, you can’t just ask someone why they’re white.”

Then, in 2017, an anonymous Reddit user with the screen name f***_you_Karen went viral on the platform after posting rants about ex-wife Karen, who he said had taken his children and their house during the divorce proceedings.

It spawned the subreddit r/f***youkaren in 2017 where people could share stories and memes about run-ins with entitled middle-aged white women.

The urban dictionary definition of Karen appeared in March 2018 and the meme was inducted into the slang hall of fame.

Since then, Karen has saturated the internet.

“Karen is a caricature of the problematic aspects of whiteness and privilege,” the University of Melbourne’s Dr Lauren Rosewarne, who specialises in gender, sexuality and pop culture said. 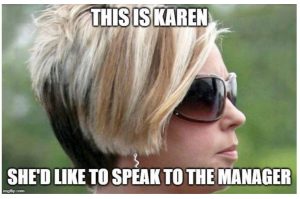 “It’s manifested in middle age white women. We would have used to use the word ‘basic’ to describe her aesthetically,” Dr Rosewarne said.

“But the key parts are, she’s white, she’s middle-aged, and generally she’s blonde, not always, but in memes she is.

“She’s seen as someone who is oblivious to how they treat others.”

Proponents of the Karen meme argue that it’s a way to use humour to subvert the entitlement of middle-class women who treat people of colour and people in service roles like they own them. 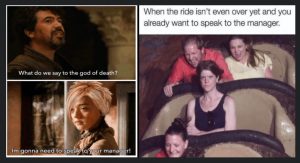 “It’s a class thing, but it’s an obliviousness thing. Or another way to look at it is, there’s an entitlement there,” she said.

Karen is straight, drives an SUV in the city, refuses to vaccinate her children, lives in the suburbs, drinks too much wine, posts trite motivational messages on Facebook and calls the police on black people who are just going about their lives.

Karen can be contradictory. She passively-aggressively enforces COVID-19 guarantee restrictions and at the same time protested strict lockdown measures because she couldn’t get to the hairdressers. 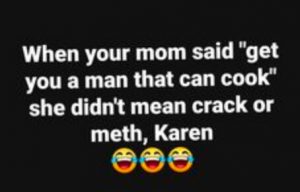 Mostly, she’s as entitled as she is ignorant and lives her life without consequences.

The joke manifests in different ways, and the memes often respond to global and viral events, so it has had a long internet shelf life.

“Every time we think it’s done they’ll be scandal like the one in New York and it gets new life because she’s the new iteration of Karen,” Dr Rosewarne said.

“It has millage and high-level saturation.”

But is Karen sexist?

As the meme took off and become more prominent online the message behind it got confused and, what was once a way of laughing at the racial controversies white women caused, became a controversy in its own right.

The criticism is that Karen is sexist. That we make fun of only women for being demanding, that there is no male equivalent.

‘Why is it OK to make fun of entitled white women when they ‘ask to speak to the manager’ but never a man?’ is the general line of questioning.

Real-life Karen’s have arched up. With one recently writing to the editor of the Los Angeles Times to say she was ‘grief-stricken’ that the paper had run an opinion piece condoning the use of Karen, or as she put it, approving ‘of dragging my name through the mud’.

But the debate fired up in April after radical British feminist Julie Bindel tweeted that “the ‘Karen’ slur is woman-hating and based on class prejudice”, arguing that it was a working-class name.

Enter the furore of the internet.

Almost no one in Australia has heard of Ms Bindel, but the tweet made Karen very busy, as she bounced around opinion articles, twitter threads, and Facebook arguments.

On one side we had a thousand Karens scorned, and their allies who wanted us to see the meme as sexist.

On the other, we had many people of colour and less-radical feminists who were frustrated that the term’s original use, to direct racism in a humorous way, was being thrown out the window by ‘whiney white women’.

Oh, Karen, what have you done?

Like most things, Karen is complex, said Dr Rosewarne.

“There was a chat on social media yesterday about what the male equivalent is.

“People were proposing things like Chad, but Chad isn’t the equivalent.

“Much like sl-t and stud, we don’t have a male equivalent, and that means there is something gendered about it, even though the memes are primarily about whiteness.

“Lots of things that are meant to be one thing, have other underlying aspects.”