You Stupid Boy
Home US Politics Don't Piss off Trump 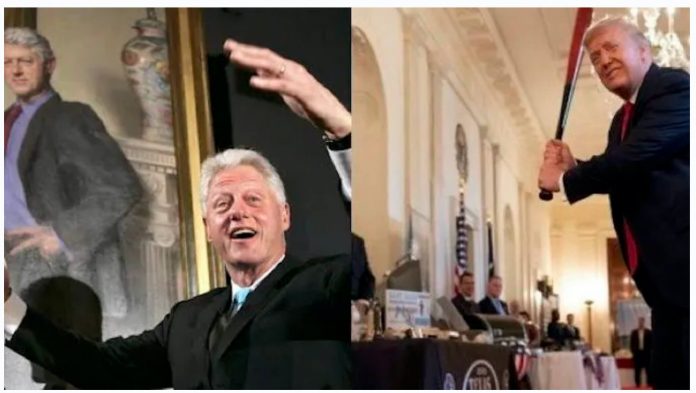 The White House has suddenly moved former President Bill Clinton’s official portrait from its prominent position in the entrance hall and placed it in a “storage room” used to store “unused tablecloths and furniture.”

In the past, the portraits of recent presidents have been given pride of place and hung in the Grand Foyer of the White House, within view of all those who visit.

But now the spots occupied by Bill Clinton — who is embroiled in the Jeffrey Epstein scandal — and former president George W. Bush have been taken over by two portraits of Republican presidents who served more than 100 years ago.

The Clinton and Bush portraits have been taken down and moved to the Old Family Dining Room, a small room off the grand State Dining Room, that is used to store “unused tablecloths and furniture.” 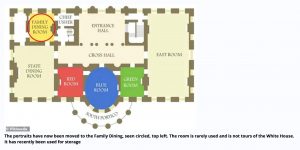 The room is so insignificant, it was not part of any public tours of the residence that were given before the coronavirus pandemic struck.

At the two stood in the Cross Hall area of the home and made respective remarks the portraits could be seen looking on.

The paintings would also have been visible to Trump each day as he walked down the staircase from his private residence.

In May it was revealed that Barack and Michelle Obama’s presidential and first lady portraits will not be unveiled and hung in the White House until Donald Trump is out of office.

The long-held tradition of current presidents attending the unveiling ceremony of the portraits of their predecessors and their wives during their first term will be skipped during this presidency due to a bitter feud between Trump and Obama.

If Trump wins a second term in November, it means Obama may have to wait until 2025 to have his portrait revealed and displayed in the White House among every U.S. president before him.