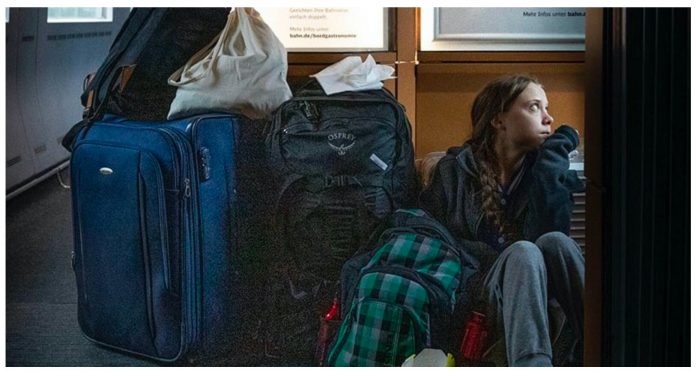 Train company Deutsche Bahn is set to receive a dressing down from German authorities after it embarrassed climate change activist Greta Thunberg.

Last week, Thunberg appeared in a photograph which many saw as a staged PR stunt. Surrounded by heavy bags, an angelic light fell on Greta’s face as she sat on the floor of a train carriage.

“Travelling on overcrowded trains through Germany. And I’m finally on my way home!” she posted, suggesting that not enough money was being spent on ‘green’ transport.

However, train company Deutsche Bahn swiftly responded to correct Greta, tweeting, “It would have been even nicer if you had also reported how friendly and competently you were looked after by our team at your seat in first class.”

Greta claimed that she had sat on the floor for parts of the journey, but speculation that the incident was a staged photo-op continued to linger.

OMG even German Rail companies are now dunking on the fraud that is @GretaThunberg! 🤣 pic.twitter.com/aAQjJJNWAt

Now representatives of Deutsche Bahn are set to be hauled in front of Berlin’s data protection officer for a dressing down.

The official reason given is that the train company revealed details of Greta’s travel information, which is a violation of privacy laws.

The “conversation” will take place between the company and authorities despite there being no complaint from Greta or her representatives.

Given how hard the establishment has thrust Greta into the international limelight, it might be naive to think that Deutsche Bahn’s ticking off is a simple data privacy issue.

Given Thunberg’s new found status as a de facto cult figure, could the company actually be being reprimanded for questioning dear leader?

Biometrics Data Collection is All Around You The worldwide digital panopticon isn’t coming – it’s already here.  While China has the most surveillance cameras in...
Read more
Climate Change Bullshit