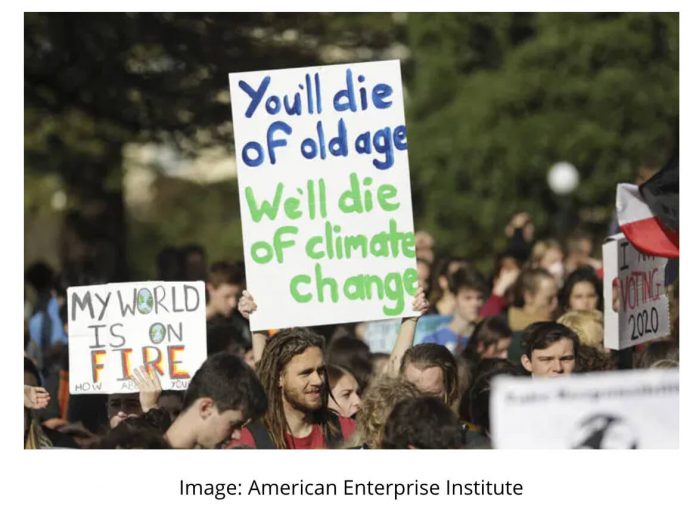 In this article, Jack Dini discusses how every one of the predictions of death by the climate that we have seen has failed.

William Buckley had this to say about predictions, “I remember participating in a forum in the late 1970s, in which the principal speaker was the representative of The Economist (the London weekly). He had been designated it’s futurist.’ The original idea was to devote an entire issue every ten years forecasting the primary concerns of the ensuing ten years. To prepare himself for that assignment, he had gone over the futurist issues of the past hundred years and learned that there was only this constant: the predicted concerns of the next decade turned out in no case—not ever—to be the actual concerns of the ensuing decade.”

These days climate alarmists are as bad, or worse than the ‘futurists’ Buckley talked about. The top prediction from the first Earth Day five decades ago was that ‘the pending ice age was coming’ as the earth had been cooling since 1960 and the temperature would be 11 degrees cooler by 2000. A recent peer-reviewed paper identifies 79 ‘apocalyptic’ predictions formulated since 1970 by ‘researchers and activists’ who ‘predict cataclysmic events’ resulting from ‘catastrophic climate change.

Already 48 of these ‘truly apocalyptic forecasts’ have failed. The other 31 are likely just as wrong, but the prediction end dates haven’t expired yet, as ‘the apocalypse is always about 20 years out.

The paper effectively exposes a ‘string of repeated apocalyptic forecast failures over the last 50 years made by such activists as Al Gore, Paul Ehrlich, and Tim Flannery. Activists/scientists James Hansen and Michael Mann have catastrophic predictions set to expire in the 2030s and the IPCC had a cataclysmic forecast already fail and 3 others that will expire and 2029 and 2050. The researchers noted that the average time horizon before a climate apocalypse for the 11 predictions made prior to 2000 was 22 years, while for the 68 predictions made after 2000, the average time horizon was 21 years.

Despite the passage of time, little has changed across half a century of forecasts; the apocalypse is always about 20 years out. Making sensational predictions of the doom of humanity, while scientifically dubious, has still proven tempting for those wishing to grab headlines.  There are some recent exceptions to this 20-year forecast: – In 1989, the United Nations said we have ten years to save the planet from global warming.

Do the math- that was 31 years ago! Now they say we only have ten months!  – US congresswoman Alexandria Ocasio-Cortex says, “World will end in 12 years if no action taken.”

Joe Biden has an even shorter time frame: “Only nine years left to save Earth.” The authors of the peer-reviewed paper’s intention was to warn the climate science community about the cry-wolf dangers of repeatedly making ‘extreme forecasts’ that when they inevitably fail, undermine the trust in the underlying science. It is highly likely that these warnings will be ignored, however, as ‘making sensational predictions of the doom of humanity, while scientifically dubious, has still proven tempting for those wishing to grab headlines.’

Al Gore is perhaps one of the best examples of this. Hans Rosling, author of the book Factfulness, which says the world, for all its imperfections, is in much better shape than we might think, was on a program with Al Gore. Gore suggested to Rosling that he should add some fear to his presentation. Rosling rejected this as being against his principles. Not so with Gore who thrives on bad news and fear-mongering.

For five decades, experts have been predicting renewable energy would supply 20 to 50 % of the US electricity grid. Instead, it’s taken as long to get to one-fifth of the original prediction. And to get to that pitiful 10%, that includes hydropower. “Yet the seductive temptation of ‘free energy’ rolls on, never mind about the vast infrastructure and land it takes to capture a low-density energy source.

Steve Milloy notes that 2020 has been the wildest and most unpredictable year in memory of most people. But did the climate doom that was predicted to occur in or by 2020 materialize? Not even close. As it turns out climate doomsayers weren’t seeing so 20-20 when it came to 2020.

Here Are Some Of Milloy’s Examples:

Snow: 2000: By 2020 snow will be so unfamiliar people won’t know how to deal with it. 2020 reality: It still snows, in fact, lately there has been a lot in very recent months

Someone should ask the alarmists what they got right. The trouble is that doomsday prophets are never held to account for their failed predictions, yet their alarming messages live on.

Here’s a prediction that will definitely come true. “There will always be people who make predictions, especially alarmist ones that will not come true.”

Previous articleCan You Believe This Shit?
Next articleHave Your Say